Former president of Switzerland Ruth Dreifuss (centre) speaks during the Drug Policy Reform discussion at Universiti Malaya in Kuala Lumpur January 30, 2020. — Picture by Yusof Mat Isa
Follow us on Instagram, subscribe to our Telegram channel and browser alerts for the latest news you need to know.
By By SYED JAYMAL ZAHIID 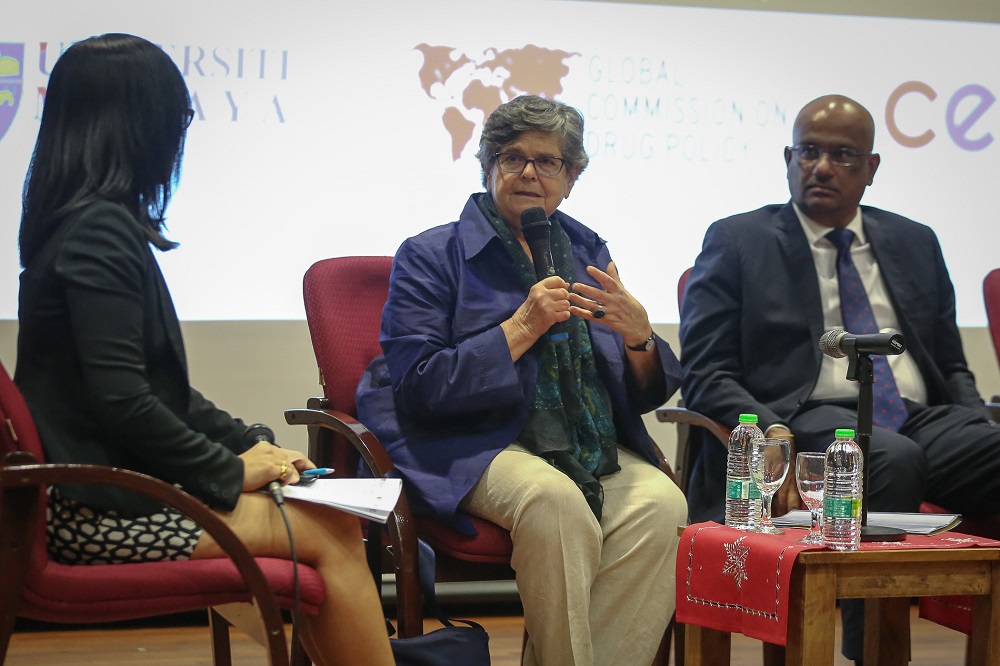 KUALA LUMPUR, Feb 6 — In the 1980s and 1990s, Switzerland had the highest HIV infection rate in Western Europe and a severe heroin addiction problem.

It was so bad that one park in its financial centre Zurich earned the notoriety of being an international gathering spot for addicts.

But while most parts of the world at the time felt declaring war against both users and traffickers was the best response to the drug problem, the Swiss government took a radically different path: it built safe injection rooms instead so users could shoot up heroin under supervision.

The approach, called the heroin-assisted treatment, helped cut overdose deaths by half between 1991 and 2010.

By 2019, there were zero needle-transmitted HIV infections while the number of new heroin users dropped by 80 per cent!

Switzerland’s accomplishment now serves as a model for an increasing number of countries, including those with some of the harshest anti-narcotics laws like Iran and China.

And one of the key lessons governments look to emulate is how Switzerland overcame entrenched social and political barriers and got a predominantly conservative society to back a policy that decriminalised drug users.

“You can be conservative and still be pragmatic,” Ruth Dreifuss, Switzerland’s president and interior minister from 1993 to 2002, said in a recent interview with Malay Mail.

“We had to be pragmatic because we had a problem to solve. What was the problem? At the peak of the AIDS epidemic, (we were one) of the worst in Europe and a great number of overdoses by heroine,” she added. “This became very visible for the whole population.”

Dreifuss was on a working visit to Malaysia for a decriminalisation forum jointly organised by the Global Commission on Drug Policy and Universiti Malaya’s Centre of Excellence in Research of HIV or CERIA. Dreifuss is the commission’s current chairman.

Dreifuss, a member of the Social Democratic Party at the time, was among key thinkers who shaped Switzerland’s radical drug policy and a pivotal figure behind the reform drive that later made the tiny nation a global model for drug addiction treatment.

When Dreifuss was first elected into office in 1993, drug addiction was a national health and social emergency, and eventually a politically-charged issue.

Her predecessors had already experimented with containment. Under a joint-programme with the police, the Socialist-controlled Zurich city council turned Platzspitz park into an open space for safe heroin use, offering clean syringes in a bid to curb HIV infections.

But the programme backfired.

Instead of curtailing addiction, the lack of monitoring only encouraged more abuse. By 1992, the number of users in Platzspitz had swelled from just a few hundred in 1987 to about 20,000, a quarter of them coming from other countries.

The park was eventually called “needle park” because of the number of syringes found there.

The former Swiss president said one of the first moves of her administration at the time was to admit and be upfront about the crisis, which Dreifuss said helped facilitate an honest national debate about what had to be done.

“We spoke very openly... (told the citizens) the (existing) solutions by the state were not good ones, so there was a readiness to experiment,” she said.

Platzspitz was eventually closed and Dreifuss replaced the programme with a stricter heroin-assisted treatment (HAT) model that required patients attend a clinic once or twice a day, and use their prescriptions on site under medical supervision.

The idea was to combine the benefits from providing heroin free from contaminants and adulterants, and used with clean injecting equipment with the benefits of regular access to services and supervised use in a safe and hygienic venue.

By 1994, the first HAT clinics were opened as part of a three year national trial and its success prompted the federal government to expand the trial, with the aim of accommodating at least 15 per cent of the nation’s estimated 30,000 heroin users at the time.

And the results were remarkable.

Deaths from heroin overdoses in Switzerland dropped by half and needle-transmitted HIV infections plunged. Crime rate associated with drug use also declined, according to the Swiss Federal Office of Public Health.

Malaysia has had its own success with heroin-assisted treatment. In 2005, the Ministry of Health rolled out a nationwide government-financed methadone substitution programme, which helped curb the spread of HIV infections via injecting drug use (IDU).

Seven years after it was introduced, HIV transmission dropped by 39 per cent. In 2017, only 115 cases of new IDU-caused infection were reported.

The evidence of success has helped facilitate talks about decriminalising addiction, a policy the Pakatan Harapan administration is keen to adopt but is forced to put on hold due to opposition from political conservatives including hawks within law enforcement agencies.

Until today, drug dependants in Malaysia are still treated as criminals. Those arrested are either imprisoned or confined in government rehabilitation centres. Both methods have shown marginal success, with official data showing no reduction in drug-related cases.

But Dreifuss said conservative resistance to pro-decriminalisation policies is common worldwide, Switzerland being among them.

The Swiss public were initially sceptical of her reforms, she noted, and were only supportive after years of genuine and frank engagement — especially with quarters like the country’s two main Churches or conservative political parties who were most resistant to the reforms.

“On one side make a pilot project, evaluate the project and share the information and be honest with the people; be ready to renounce if the measure you proposed is unsuccessful,” she said.

“Secondly we brought everyone together to talk. We had the support of the Churches... and we also have a large Muslim population but we never get opposition from the Muslims, never.”

In Malaysia, drug law reform activists said there has been a lack of willingness by both proponents of decriminalisation and conservatives to sit down and debate the problem openly, which is hindering crucial reforms.

As a result, rights groups said injustices that victimise dependents — often those from poor households — continue unabated. Inmates arrested for drug-related cases still form the largest prison population, and most for minor offences like small possession or for drug use.

But the Swiss are all too familiar with the problem, Dreifuss said. Before her government revamped its drug laws, punitive measures only led to more arrests and mostly involving drug abuse. Only a few traffickers were incarcerated.

“We knew it wasn’t working so we needed to change but to do that, we needed to get everyone’s support for the programme,” she said.