PUTRAJAYA, May 7 — Private vehicle owners may tint their non-driver windows beyond the current visible light transmission (VLT) limits as long as their vehicles have side mirrors, the transport minister said today.

According to Anthony Loke, the ministry’s decision was in response to the public’s desire to darken their vehicle windows to filter out heat and for skin medical conditions.

“With these amendments (to existing laws), we have no more (VLT) limitations for passengers at the back and the rear windscreen. They can be darkened even more,” Loke said.

The minister added the move would also address the issues faced by many Japanese-made cars, which usually come with tinted back windows that have different VLT rates.

However, the minimum VLT rate for the front windscreen and driver’s window remain at 70 per cent and 50 per cent, respectively.

The minister also noted that vehicle owners who have been following the VLT rates under previous regulations under the Motor Vehicles (Prohibition of Certain Types of Glass), 1991, will not be affected by the new amendments.

For vehicle owners intending to darken their front and driver’s seat windows beyond the approved VLT rates, they must first pay RM50 to apply for the ministry’s approval, Loke said.

“Applicants who receive the approval will be charged a RM5,000 fee, and every permit given has a two-year duration,” he added.

However, exceptions will be made for vehicle owners with health reasons certified by government doctors as the group may fully tint their vehicles without the additional fee.

Vehicles with existing tinted windows that are already lower than the set VLT will also have to re-apply for approval, he clarified.

“About 20,000 applications for tinted windows have been approved since 2011, and most of the applications were made for security purposes, Loke said, pointing out that most applicants are from the high-income group.

The ministry is also forming a special committee to vet applications, and applicants who have committed criminal offences or unresolved summons would not be granted approval, he said.

The updated regulations under the Motor Vehicles (Prohibition of Certain Types of Glass), 1991 will be enforced tomorrow.

However, vehicle owners are allowed a grace period of three months to apply for ministry approval, Loke added. 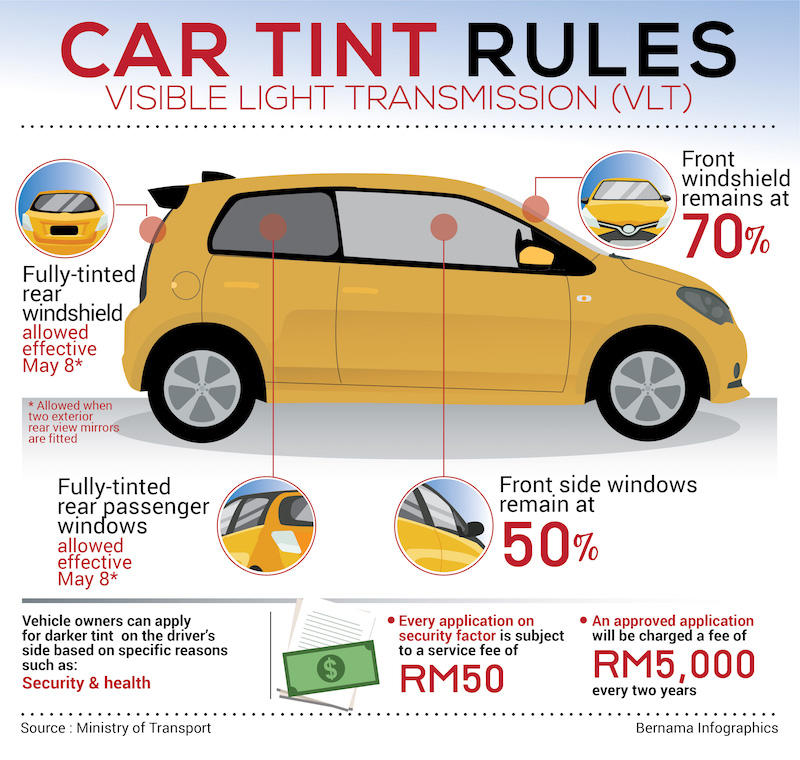