KUALA LUMPUR, Feb 20 ― Malaysia’s 4G broadband throughput drops to as low 9Mbps during peak traffic periods daily or 36 per cent below average, according to a new network quality survey.

The dip typically occurs around 10pm each day, according to the report released today by mobile analytics firm OpenSignal.

On average, 4G speeds are 14Mbps but can be as fast as 21Mpbs or about 2.3 times faster than the daily low point.

While nights are typically the worst for bandwidth-intensive activities, speeds begin suffering from the evenings onwards due to content streaming activities.

This behaviour is consistent worldwide. Most countries’ networks are busiest between 8pm and 11pm, after the business day concludes.

The outlier is Japan that has its busiest time at noon, which the report said is most likely due to users there watching mobile videos at lunchtime.

The report also pointed out that the Asia-Pacific region has the biggest disparity in download speeds. While South Korea and Singapore can achieve an average speed of 47.1 Mbps and 45.4 Mbps, respectively, Thailand is only able to reach 8.2 Mbps and Indonesia, 8.6 Mbps.

The region also has some of the slowest speeds at the busiest times of the day, said the report. 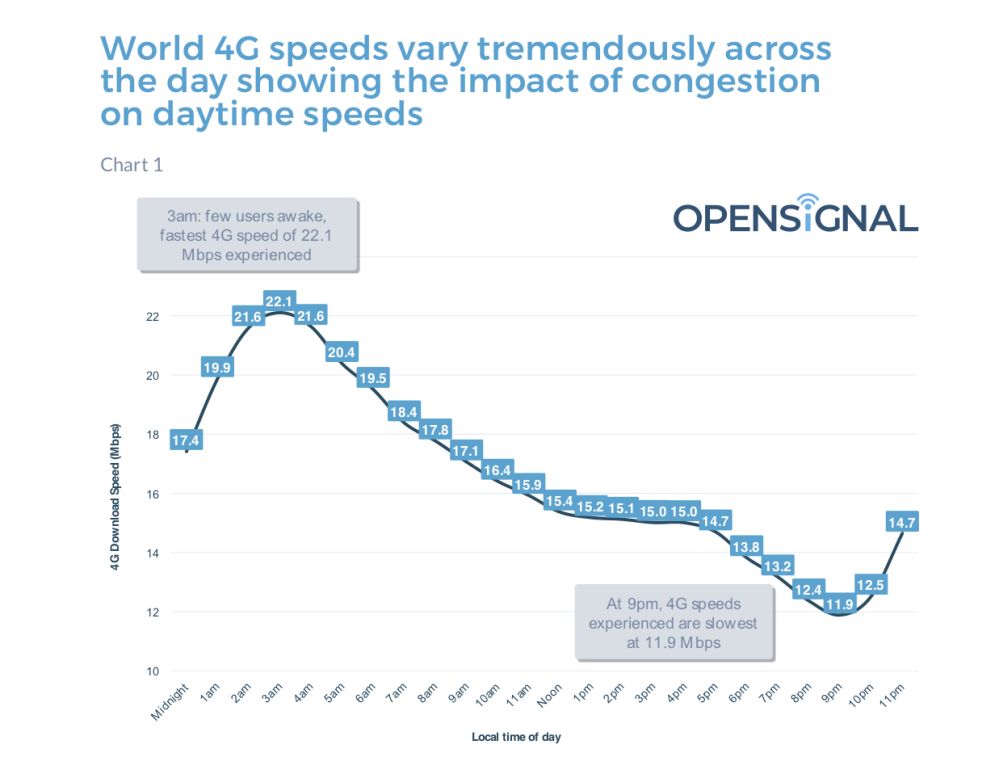 This comes as the report lauded the opportunity to address the congestion using the next-generation 5G network that promises high data rates, reduced latency, and energy saving, among others.

It also suggested that cities such as Kuala Lumpur will benefit the most from the new 5G capacity, since urban areas experience “wild swings” in speed that were greater than country averages.

OpenSignal measures the mobile network experience of tens of millions of smartphones globally every day. For the report, it collected two billion individual measurements from those consumer devices.

This comes as Communications and Multimedia Ministry said last week that Chinese telecommunications giant Huawei Technologies Co Ltd is still in contention to be the first to set up a 5G network in Malaysia, despite fears of espionage.

Huawei is currently the leading expert in 5G technology but has been accused of using its expertise and back-door channels to provide the Chinese government with information obtained from its users and telecommunications networks.

It was supposed to be the pioneer in setting up a 5G network in Malaysia, with Putrajaya and Cyberjaya selected by the ministry as the testing grounds.

With the spying allegations growing, however, the government has tasked the Malaysian Communications and Multimedia Commission and the National Cyber Security Agency with checking Huawei’s alleged involvement in espionage activities.