PTPTN to garnish wages of borrowers from 2019

KUALA LUMPUR, Dec 5 — Federal student loan takers earning above RM2,000 a month no longer have to pay the National Higher Education Fund Corporation (PTPTN) as the agency will deduct the funds directly from their salaries.

PTPTN chairman Wan Saiful Wan Jan told a press conference earlier that a directive will be issued to employers to garnish wages where needed, with the system to emulate the Inland Revenue Board's (IRB) monthly tax deduction (PCB) system.

“PTPTN will work with relevant agencies, among them the IRB, Employees' Provident Fund (EPF), Retirement Fund Inc (KWAP) and the Immigration Department to obtain salary information as well as details of borrowers' employers.

“Based on the information, PTPTN will issue a directive for employers to deduct salaries according to the percentage set.

“Employers will be responsible for deducting the salaries of their staff (borrowers) for the purpose of PTPTN loan repayment,” Wan Saiful was reported to have said when announcing the new repayment mechanism at Menara PTPTN, today.

He said employers who assist their staff to repay their study loan through the newly introduced PGB scheme will be entitled to tax relief for the amount paid.

The tax relief will benefit both full repayment or monthly repayments with the condition that employers would not impose any terms against the staff after the repayment is made.

“Perhaps employers can offer PTPTN loan settlement as an incentive for exemplary staff members or incentive in recruiting new employees.

“This incentive can serve as motivation to employees and at the same build employers' reputation,” he said. 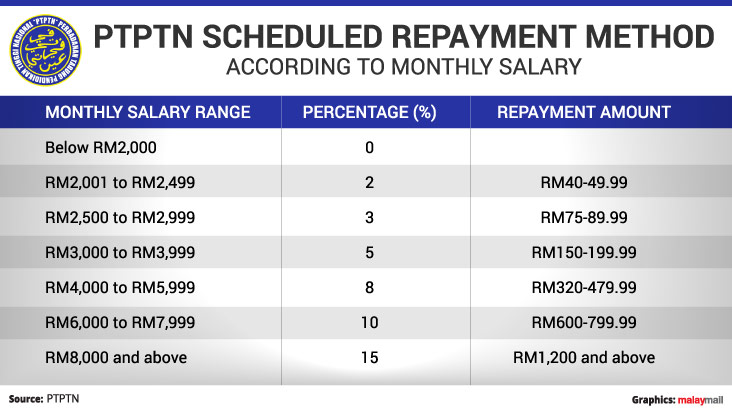 Senior citizens earning a monthly salary of between RM2,000 to RM4,000 and have repaid their loans consistently for three years before hitting 60 will have their loan balance waived.

As for the abolishment of the one to three per cent administration fees, Wan Saiful said the government is still reviewing the matter.

At present, 1.4 million out of 2.9 million PTPTN borrowers have not fulfilled their loan repayments.

The percentage structure for the repayment method according to monthly income is as follows: