Author Felicia Yap poses with copies of her novel during a book signing event at MPH Mid Valley on November 1, 2017. ― Picture by Miera Zulyana
Follow us on Instagram, subscribe to our Telegram channel and browser alerts for the latest news you need to know.
By By Zurairi AR

KUALA LUMPUR, Nov 2 ― Felicia Yap is thrilled to be home. Now based in London, the Cheras-born scientist-turned-thriller novelist is taking a one-month break from her hectic schedule following the success of her much anticipated debut, Yesterday.

She certainly did not waste her time. She touched down on Monday afternoon, and proceeded to speak at a writer’s workshop before launching the Malay translation of her high-concept title the next day.

“I’d love to meet as many readers as possible. That’s what makes writers really happy. People who read their books connecting with them in person,” Yap declared of her “balik kampung” ― or homecoming ― trip.

When Malay Mail Online caught up with her during a book signing session yesterday at the MPH bookstore in MidValley Megamall shopping centre, Yap immediately started chatting with our photographer.

“It’s for the next book,” Yap admitted, explaining that she was developing a character who is a photographer.

Yap revealed she is close to finishing the prequel ― titled Today ― which will revolve around a new set of characters, of which only the secretive detective, Hans Richardson, returns.

“I’m bringing him back in the prequel. It’s set before he loses his memory at a young age,” she related. The book is set to be launched in August next year, one year after Yesterday hit the shelves.

Published by Wildfire Books, an imprint of Headline Publishing Group in the United Kingdom, Yesterday had caused a stir in the publishing scene as the rights was auctioned for a six-figure deal after a bidding war. 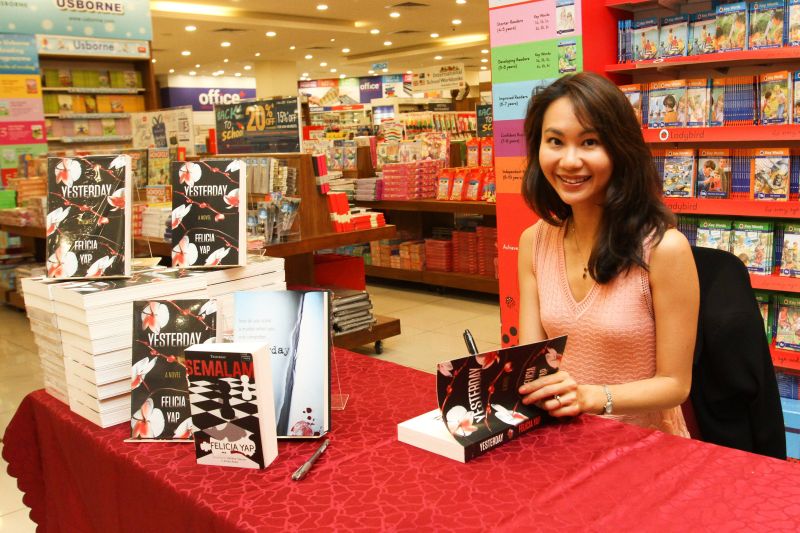 On Monday, Yap had shared her unprecedented ride in publishing for a Malaysian Writers Society’s workshop in conjunction with its MYWritersFest 2017, which she named “10¾ Things You Should Know About Being Published Internationally”.

“Be obsessive and determined… The writing journey is not an easy one. There’s so many potential problems, there could be rejections, or in finding someone to represent you, a publisher, publicity for your book,” Yap said, listing one of her points from the workshop.

“I think it’s important to keep going … A lot of people I’ve met in the past year in publishing all had single-minded vision. They had goals of wanting to see their work in public domain, and just kept at it until they succeeded.”

But what about the ¾ point?

Yap expressed her gratitude to MPH for hosting her signing session, and local independent publisher Fixi that published the Malay translation titled Semalam ― launched Tuesday night during the MYWritersFest 2017 finalé.

Fresh off the press, Yap has already gone through the first few chapters herself. She was pleased with the result, especially the translation by Zalikha Yaacob and Anida Adam.

“I loved it. The voices are distinctive, and I thought that’s important. Part of the challenge of writing it in English was to keep the four voices unique,” she said, referring to the four main characters who serve as the points of view for the readers.

Yap was also happy with Fixi’s design of the cover for Semalam ― which incorporated a chess motive, in reference to Richardson’s hobby in the book. The significance of the classic board game would be elaborated in Today, she said. Yap will return for the George Town Literary Festival in Penang at the end of this month, before jetting back to London. ― Picture by Miera Zulyana

Next, Yap will attend a book signing session in Singapore this weekend, before continuing her break. She will return for the George Town Literary Festival in Penang at the end of this month, before jetting back to London.

But not before she catches up with her old friends and classmates from Convent Jalan Peel  ― some of whom she has not seen for two decades since she left for the UK. A few had even dropped by to see her earlier, Yap said excitedly.

“It’s amazing how a book brings old friends together,” she said.

Not long after, a woman approached her. Yap squealed with delight as recognition dawned, and the two embraced each other over stacked copies of Yesterday.