KUALA LUMPUR, July 17 — With the country’s first-ever Mass Rapid Transit (MRT) line kicking in fully today, this is the best time to read up and gear up to take full advantage of this new train service.

Here’s a quick list of information from MRT builder MRT Corp and operator Prasarana to get you ready for the full operation of the whole Sungai-Buloh Kajang (SBK) line:

The entire 31-station SBK line is expected to cater to 1.2 million residents in the Klang Valley with its 51 km-long route connecting a previously underserved corridor, including Cheras and Kajang.

Out of these 31 stations, 12 stations under the first phase are already in use, while 19 additional stations — including seven underground stations with unique designs — will welcome passengers from today onwards. 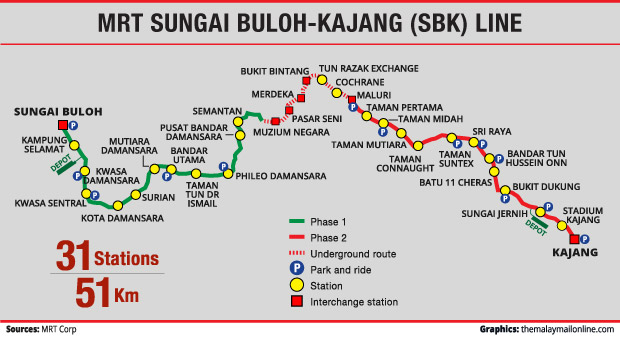 The whole line will be served by trains that can each carry 1,200 passengers per trip for a daily capacity of 400,000 passengers.

For the first phase which started operations last December 16, it carried one million passengers within its first month where passengers rode for free.

Prasarana, whose subsidiary Rapid Rail operates the MRT SBK line, told Malay Mail Online that over 2.7 million passengers were recorded using the line’s first phase from January to June with a daily ridership of 15,000 people.

MRT Corp strategic communications and stakeholder relations director Datuk Najmuddin Abdullah said that the ridership for the first phase was never expected to be very high as it did not go into the city centre and does not integrate with any existing rail service.

Najmuddin said the ridership is expected to rise significantly after the opening of the second phase, as it will feature seven interchange stations that allow access to various train services such as LRT, KTM, Monorail and ERL.

“The interchange stations would allow rail users to seamlessly transfer from one rail service to another, allowing the reach of the rails services to expand even further through this connectivity,” he told Malay Mail Online, adding that future property developments at stations such as Kampung Selamat, Kwasa Damansara, Kwasa Sentral, Pusat Bandar Damansara, Tun Razak Exchange, Cochrane will boost ridership figures.

Prasarana is predicting a daily ridership figure of 150,000 people for the MRT SBK line when the second phase kicks in.

Commuters will find themselves skipping traffic jams and zipping by in fully-automated four-car train sets that go from station to station in just one to four minutes, depending on the distance.

According to MRT Corp, passengers will have to wait four minutes for the next train during the peak travel periods of 7am to 9am and 5pm to 7pm on weekdays, and a range of seven to 15 minutes during off-peak period, weekends and public holidays.

Trains run from as early as 6am daily until midnight. 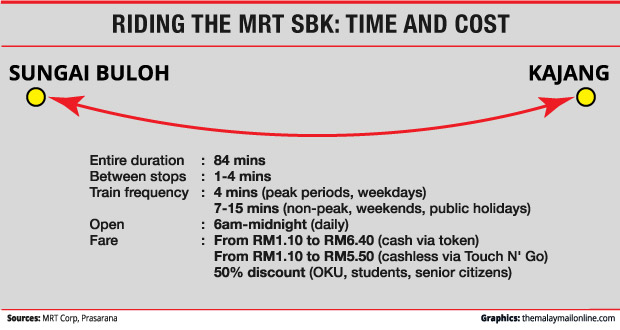 You will get to ride the Muzium Negara-Kajang stretch for free from 4pm to 11.30pm today, but will have to pay your way from Tuesday onwards.

If you use cash to buy the MRT tokens, you will have to pay RM6.40 for the entire length of Sungai Buloh-Kajang. It is cheaper to use the cashless option for MRT rides via a Touch N’ Go card, with the same trip to cost RM5.50. Travel from one station to the other starts from as low as RM1.10 for both token and cashless options.

4. But it’s not right by my doorstep

A key obstacle deterring those in the Klang Valley from switching to using public transport is the lack of first-mile and last-mile connectivity, such as when train stations are relatively near your house but just a bit too far to walk to for daily commutes.

MRT Corp has that covered with 7,677 parking bays for cars under the Park n’ Ride concept at 13 of the SBK line’s 31 stations, while 1,013 motorcycle bays area available at the eight Park n Ride spots owned by MRT Corp

The parking fares are at the relatively affordable rate of RM4.30 per entry and RM1.10 per entry for cars and motorcycles respectively if you are also a MRT passenger, but hourly rates apply to car owners who are non-MRT users. And yes, they can tell which is which because MRT users also pay for parking using their Touch N’Go card.

You could also hop on to a MRT feeder bus at a fare of just RM1 per trip, with 300 of these 62-passenger capacity buses to ply 49 routes at a frequency of between 10 and 15 minutes depending on traffic conditions from 5.30am to 11.30pm.

For the eco-warriors and health buffs, you may also cycle to MRT stations and park your bicycles there for free. The same Bike N’ Ride policies already in place for LRT trains also apply to MRT trains, where foldable bicycles are allowed on board during non-peak hours at no extra charge.

5. Where does it actually take me to?

For those in the Klang Valley who can’t seem to get enough of shopping, you will be pleased to note that at least 16 of its stations provide easy access to malls, including the Bukit Bintang and Cochrane stations.

According to Najmuddin, there are also over 40 educational institutions ranging from primary schools to universities along the MRT SBK line; while 11 hospitals and healthcare facilities are accessible from eight of the stations.

Beyond bringing benefits to individual Malaysians, the MRT SBK line will help reduce traffic congestion by removing an estimated 160,000 cars from roads in the Klang Valley, Najmuddin confirmed.

That should be good news as the number of cars in the Klang Valley was reportedly 3.2 million in 2011 and was projected by the Finance Ministry to hit seven million by 2020 if there is no “marked shift to public transport”.

“At the same time, this project will be able to generate an increasingly productive workforce where 280 million hours per year will be avoided from being wasted due to traffic congestion and sometimes due to traffic congestion, we have lost focus and mood for work. This translates to RM20 billion a year in time savings,” Najmuddin told Malay Mail Online last week when commenting on the ambitious Klang Valley MRT project.

Construction is ongoing for the second MRT line dubbed the Sungai Buloh-Serdang-Putrajaya line that is expected to be fully operational in July 2022 with 37 new stations over 52.2km with projected daily ridership figures of over 500,000 passengers, while authorities are currently studying the feasibility of building a third MRT line called the Circle Line.