KUALA LUMPUR, Oct 23 — India has warned Malaysian employers that they risk losing privileges given to them if they abuse Indian nationals in their workforce.

The High Commission of India to Malaysia said it has been partnering with Putrajaya’s Human Resources Ministry to curtail such alleged abuse cases and take remedial action, but added that complaints of ill-treatment continue.

“However, we are still getting information of cases of physical abuse and ill-treatment of Indian manpower in Malaysia.

“In order to curb this practice which are also contrary to the laws and regulations of Malaysia, the Indian High Commission has decided that in cases where there is an evidence of abuse and ill-treatment, the employers responsible will be withdrawn the privileges which the Indian Government has extended to them, like PIO card, visas etc,” it said in a statement today.

The PIO card stands for Person of Indian Origin and is issued to non-citizens with Indian ancestry or roots in India, the benefits include exemptions from student or employment visa requirements.

Holders of the PIO cards also receive equal access to economic and educational facilities as offered to non-resident Indian citizens.

The Indian High Commission did not cite specific examples of ill-treatment except for a purported incident where a worker at a textile shop in Brickfields was hit with a bottle for not showing up for work. 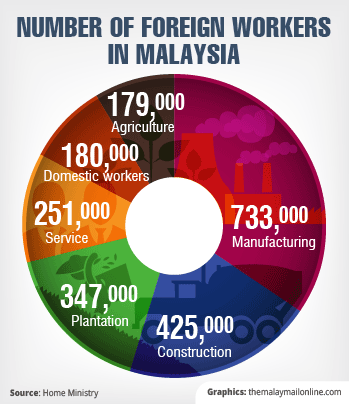 As the third largest economy in Southeast Asia, Malaysia has long relied on cheap labour provided by migrant workers from neighbouring countries in sectors usually shunned by locals.

In statistics provided to Parliament last October, the Home Ministry said Malaysia has 1.3 million foreigners registered under its 6P programme — which was meant to legalise labourers here without proper work permits, with 733,000 of them working in the manufacturing sector.

In the data made available last October, India placed fifth in the list of countries that supplied the highest number of workers to Malaysia at 117,000.

Last November, Parliament was told that cash transfers by Malaysia’s foreign workers to their home countries doubled from RM10 billion in 2009 to RM20 billion in 2012. Last month, Reuters reported that a US Department of Labour-funded survey by international labour rights group Verite found that almost one-third of the estimated 350,000 workers in Malaysia’s electronics industry were forced to work after being indebted to recruiters charging excessive fees.

The US State Department’s annual Trafficking in Persons report said Malaysia has not progressed in protecting the rights of foreign labourers.