Protesting youths that were involved in an altercation with PAS volunteers during the May Day rally at Merdeka Square in Kuala Lumpur, May 1, 2014. — Pictures by Pathma Subramaniam
Follow us on Instagram, subscribe to our Telegram channel and browser alerts for the latest news you need to know.

KUALA LUMPUR, May 1 — A scuffle broke out between youth protesters and volunteers from political party PAS during a May Day rally today, when the former group tried to invade the historic Dataran Merdeka now cordoned off to rally-goers.

It was believed that the protesters tried to swarm past the barricades erected by local authorities after tiring of the lengthy speeches from Pakatan Rakyat politicians during the rally.

“We can listen to speeches during other times, bro. But now, let us go to Dataran,” a male protester in his early 20’s, clad in black, was heard shouting to a volunteer trying to calm him down.

The protesters were members of student movements, with one of them waving the flag of the Antifa Malaysia group.

Antifa is a worldwide anti-fascism movement linked to anarchism.

The group was seen carrying placards that read, “Datang jauh-jauh nak dengar ceramah?” (We came this far to listen to speeches?) and “Kata PAS untuk semua tapi dengan anak muda layan macam musuh” (PAS says they are for all, but they treat youths like enemies).

After their attempt was thwarted, the youths hurled insults and vulgarities at the volunteers, and gestured with their middle fingers.

Other unaffiliated protesters quickly moved away from the group after the scuffle started, and many could be heard voicing out their disapproval.

Another tussle also reportedly happened between protesters and the press, with criticism over alleged bias aimed at sections of the media.

One of the protesters also grabbed a camera from a photographer, leading to a three-minute tussle.

According to the Malaysian Press Photographer Association, Focus Malaysia photographer Sharil Amin Abdul Rahim was allegedly kicked and punched, while The Malaysian Reserve cameraman Hafzi Mohamad was hit by a stick thrown by a protester.

Badrul Hisham Shaharin, president of Solidariti Anak Muda Malaysia (SAMM) denied that the student movement was behind the altercation with the media. 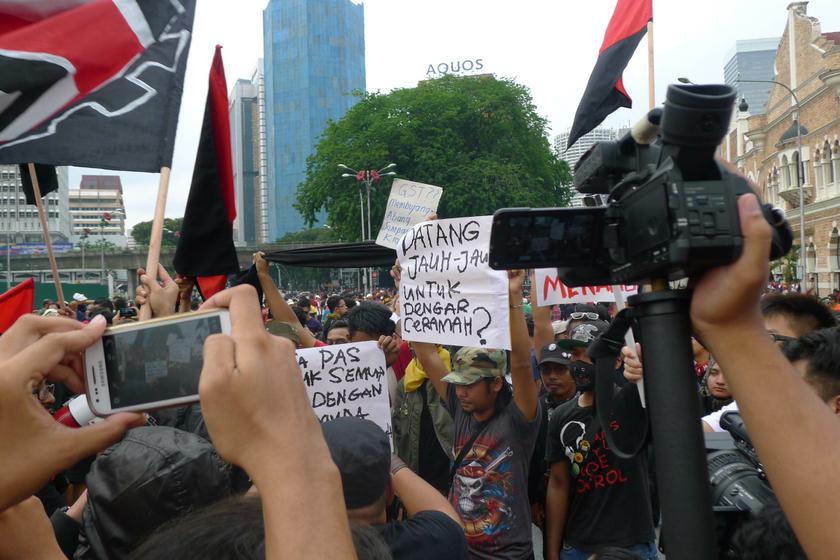 The youths, who hurled insults and vulgarities at the PAS volunteers, were also allegedly involved in a tussle with the press.

Police said today that they will not take action over the scuffle between the youths and PAS volunteers.

Police estimated that around 15,000 people took part in the May Day rally here to protest against the Goods and Services Tax, but which also saw signs of discontent over Putrajaya’s prosecution of Opposition Leader Datuk Seri Anwar Ibrahim and handling of missing flight MH370.