Visitors look at the installations at the Langur Exhibition at Penang State Art Gallery, Dewan Sri Pinang, November 8, 2021. — Picture by Sayuti Zainudin
Follow us on Instagram, subscribe to our Telegram channel and browser alerts for the latest news you need to know.
By OPALYN MOK

GEORGE TOWN, Nov 9 — The dusky langur, usually called the dusky leaf monkey, is a common sight along the fringes of forests in peninsular Malaysia but little is known about this shy creature that often avoids humans.

In an effort to increase awareness of this endangered leaf-eating primate, art curator Ivan Gabriel started putting together a proposal for a langur-themed art exhibition in early January.

Due to several Covid-19 lockdowns this year, the exhibition, which was initially scheduled for June, was postponed first to August, and yet again to October, but was finally able to open its doors to visitors on November 1.

Langur: Building Bridge Between Our Worlds is a group exhibition featuring 60 artists and 60 artworks of various mediums, from acrylic and watercolour to sculptures.

There is also a tribute corner in memory of realistic wildlife artist Nasir Nadzir, who succumbed to complications from Covid-19 in late January.

Three of Nasir’s realistic paintings of the dusky langur take pride of place as before his death, the artist was excited about being part of the exhibition.

“I remember calling Nasir on my birthday on January 8 to ask him if he wanted to be part of the exhibition and he was happy to join in,” Ivan said.

The art exhibition is not only an exhibit of artworks featuring the dusky langur, but also includes a narrative on the life of the dusky langur from birth to the threats it faces. 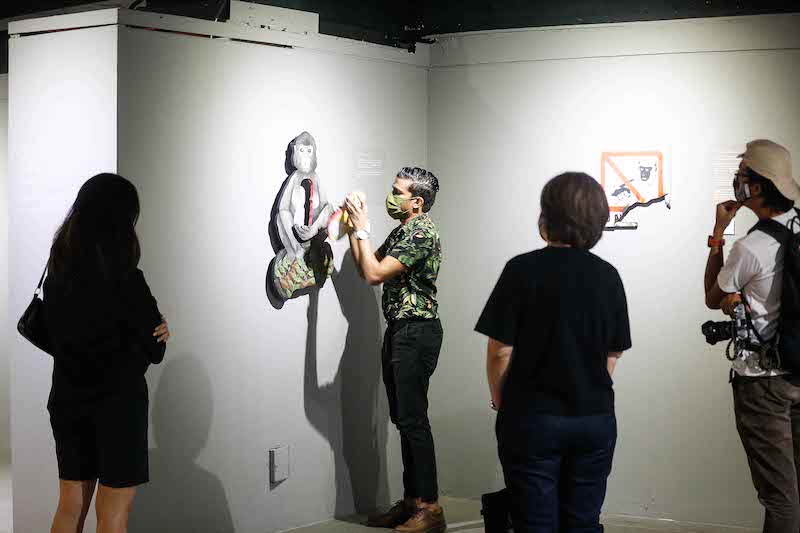 Ivan said a footprint trail leads visitors through the exhibition so that they can explore each stage in the life of the dusky langur.

The exhibition begins with artworks on the family life of the dusky langur, including how these creatures co-exist with human settlements peacefully.

The dusky langur, easily discernible from other primates due to the white rings around their eyes like spectacles, are featured in various poses in groups before the exhibits progress to a more colourful and upbeat section that showcases their playfulness.

“This section is to showcase their playfulness and their vibrance as the infants grow up, become individuals of their own and slowly leave their families to form new families,” he said.

The colourful depictions then slowly give way to the cause of the dusky langur’s endangerment with paintings such as one by Zaini Zainul, titled Back Off, showing a dusky langur surrounded by weapons, human hands, cages and chains.

Penang-based artist, Bibichun, painted a mother dusky langur holding her baby with the headlines from a recent news article on the shooting of a family of langurs by Perhilitan and titled it Entah lah.

Artist Christine Das painted a diptych, titled Betrayal, with a nozzle of a gun on one canvas and a trajectory of the bullet towards the other canvas of an image of a barely discernible mother dusky langur who holds her golden-haired infant, to signify the killing of the langurs.

These paintings then progress to showcase the illegal wildlife pet trade where infant langurs are snatched from their mothers and sold on the black market as pets.

An acrylic on wood cutout by artist ERYN titled Mother/Orphan/Pet perfectly depicts this as it is an interactive art piece where the infant dusky langur can be removed from the piece, leaving a gaping hole in the chest of the mother.

“This piece signifies how the mother’s heart was ripped out when her baby was taken from her to be sold in the illegal wildlife pet trade,” Ivan said.

An artwork by cartoonist, Azmi Hussin, titled Missing, showing his signature comic character Joe G putting up posters of the ‘Missing Baby Langur’ with an urgent appeal for the baby to be returned to its mother, continues the narrative.

From the illegal wildlife pet trade, there is then a section of mostly black-and-white pieces, a tribute to the many dusky langurs who were taken and killed over the years through human threats and intervention.

The narrative comes to an end with a poser to visitors on what it would be like if these gentle creatures were to become extinct.

In this section, there are commemorative items showcasing the dusky langurs, from an intricate necklace by Jonathan Yun, to the langurs being featured on ceramics or on porcelain plates, such as in the work titled SOS by Shamsu Mohamad of framed intricate plates with images of the langurs.

The narrative comes to an end at the special tribute corner to Nasir Nadzir where there is a sofa where visitors can sit and admire the three realistic paintings of the dusky langurs by Nasir.

On his inspiration for the exhibition, Ivan said the dusky langur is such a common sight in Penang and that its very name could be seen as a play on the Hokkien word for ‘people’, or lang.

“The word ‘lang’ is so us, so Penang, and they are a common sight all over Penang so I want to feature them, to narrate their story,” he said. The dusky langur is listed as an endangered species under the International Union for Conservation of Nature (IUCN) Red list of Threatened Species.

It can be found in Malaysia, southern Myanmar and southwestern Thailand and due to development and human activities, it has suffered more than 50 per cent in population decline.

The exhibition is organised by the Penang State Art Gallery.

It is held in collaboration with the Langur Project Penang.

Those interested in visiting the exhibition must call ahead for an appointment as per the government’s Covid-19 SOPs to prevent overcrowding of the exhibition space.

Ivan will also arrange for group tours of the exhibition if required.

The Langur exhibition is held at the Penang State Art Gallery on the third floor of Dewan Sri Pinang from November 1 to December 31.

The exhibition is open daily except for Fridays and public holidays from 9am to 5pm and only fully vaccinated individuals are allowed entry.

The e-catalogue of the exhibition can be viewed here.