This picture taken on October 7, 2021 shows Japan's professional shogi player Sota Fujii posing for a photo call during a press conference of a competition between Masayuki Toyoshima, in Tokyo. — AFP pic
Follow us on Instagram, subscribe to our Telegram channel and browser alerts for the latest news you need to know.

TOKYO, Oct 18 — Shogi, the Japanese chess variant known as the “game of generals”, is enjoying a wave of popularity in its homeland thanks to a gawky teenage prodigy with a rock-star following.

Sota Fujii’s incredible success and quirky charm have made him a household name in Japan, dusting off the traditional board game’s musty image and taking it to a new audience.

Fujii launched his bid to capture a fourth in the best-of-seven “Ryuo” championship series earlier this month, and his fellow professionals credit him with breathing new life into the chess-like game.

“It used to be only shogi fans who would follow it, but now general news programmes have shogi stories and that has attracted new fans,” professional shogi player Taichi Nakamura told AFP.

“There never used to be many female shogi fans. But since Sota Fujii came along, a lot of women have taken an interest.”

With his unruly mop of hair, goofy grin and high-pitched, lilting voice, Fujii may appear an unlikely pin-up.

But his face beams out from magazines, billboards and TV screens all over Japan, and his favourite cakes sell out at convenience stores within hours of him eating them during games.

His pronouncements to the media are typically understated.

“I don’t pay so much attention to the titles themselves,” Fujii said after his latest victory.

“The most important thing for me is how strong I can become.”

Shogi is played on a plain wooden board with pieces distinguished by painted Chinese characters. It has existed in its current form for about 400 years.

The rules are similar to chess, with the main difference that captured pieces can switch sides and return to the board — a practice said to stem from the mercenaries of 15th century Japan.

“That’s because it’s a game with infinite variety. You never get the same game twice.” 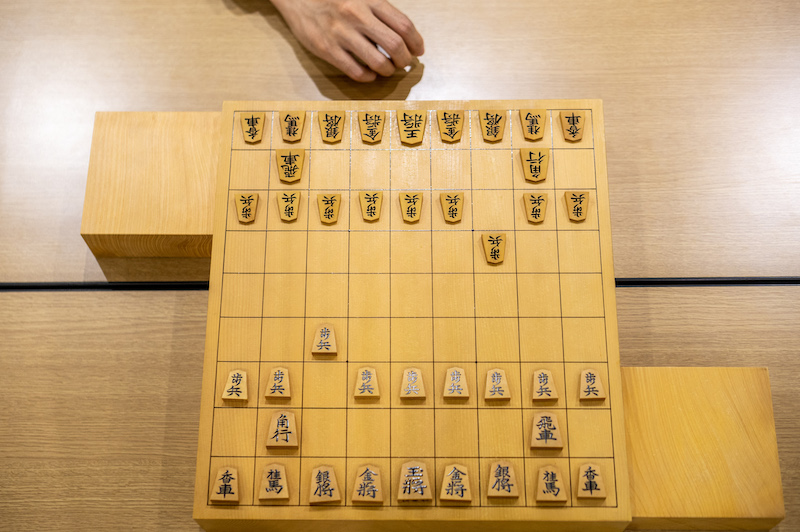 This picture taken on September 27, 2021 shows shogi pieces are placed on a shogi board at Japan Shogi Association headquarters in Tokyo. — AFP pic

Shogi apprentices must reach first dan by the age of 21 and fourth dan by 26 if they want to turn professional. There are currently around 160 active professional players in Japan.

Professionals receive a salary from the association and can earn extra from prize money and commentating on matches.

Pro player Nakamura says Fujii’s high profile has attracted casual fans who are less interested in the intricacies of the game and more in the players themselves.

“There has been a marked increase in the number of people who don’t play shogi but watch professional matches,” he said.

“People have started enjoying contests in terms of the personal storyline between the two players.”

Popular shogi-themed manga and anime have also helped stoke interest, but Fujii is not the first superstar the sport has produced.

Yoshiharu Habu was the original shogi prodigy, winning his first major title as a 19-year-old in 1989 before going on to hold them all at the same time — a feat yet to be repeated.

Habu was lauded with Japan’s People’s Honour Award in 2018 and has won 99 titles over the course of his career.

The retired player Ishida believes Fujii is stronger than Habu was in his prime, but says it remains to be seen if he can match his sustained success.

He thinks there has been a “dramatic” change in the way people enjoy shogi.

“I think there were probably more people playing in Habu’s era, but there are now a lot more fans who watch matches,” he said.

“‘Habu fever’ was something to behold, but I think everyone in the whole country knows who Fujii is.”

Fujii’s influence can certainly be seen in the Sunday morning kids class that Ishida teaches in Kashiwa, near Tokyo.

He says more children have taken up the sport since Fujii’s rise to prominence — and there is no doubt who their favourite player is.

“Sota Fujii is really cool,” said seven-year-old Soichi Ishikawa, struggling to make himself heard over the clack of pieces.

“I want to become a professional shogi player when I’m older.” — AFP