A local fresh graduate got noticed for all the wrong reasons. ― Picture by Pexels.com
Follow us on Instagram, subscribe to our Telegram channel and browser alerts for the latest news you need to know.
By ARIF ZIKRI

KUALA LUMPUR, June 29 ― A local fresh graduate applying for a job got noticed for all the wrong reasons after an impolite exchange with a recruiter from a digital marketing agency.

The screenshots uploaded by Facebook user Hara Lee, the sister of the recruiter with Wolves Digital  was shocked with the fresh graduate’s manner of applying for a job.

After the applicant stated interested in the position of senior content creator at the agency and queried about the salary and working hours.

The recruiter asked for the applicant’s portfolio and curriculum vitae, to which the graduate offered to show his FYP or Final Year Project due to not possessing a portfolio.

When asked about the meaning of FYP, the applicant questions if the recruiter went to university and insists the recruiter answer the question first to know whether the job met expectations.

The recruiter revealed himself to be the co-founder of the company, wished the applicant the best of luck searching for a job and asked him to work on his character development if he were to join the industry with the applicant merely replying with ‘Kthx’ (okay, thanks). 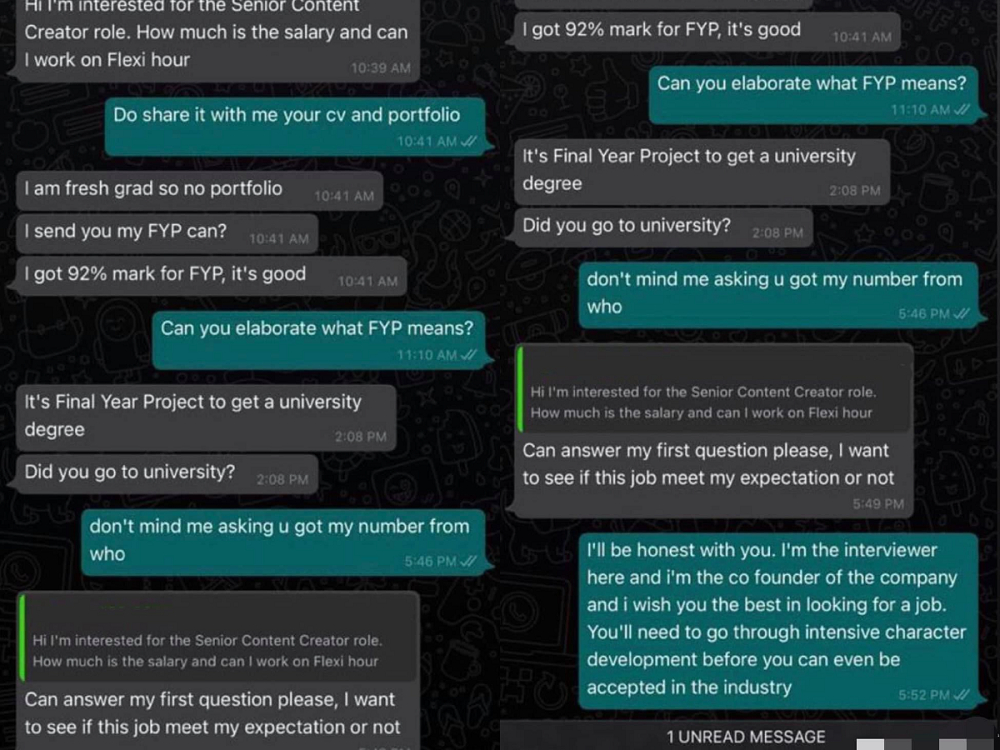 The screenshot of the conversation between the applicant and the Wolves Digital's co-founder, Samson Knight. ― Picture courtesy of Facebook/ Hara Lee

Talking to Malay Mail, the Wolves Digital’s co-founder, Samson Knight said there were red-flags waving from the beginning of the conversation with the applicant.

“When I first got the text, I actually didn't know to be angry, or to laugh because there wasn’t any proper introduction, which already reflects on what kind of person the applicant is.

“I was actually planning to give the applicant an opportunity for an interview, however after some talks, I’ve decided to forego it as I could see no real effort.”

He said that while it is not wrong for an applicant to inquire about the salary, the timing of the question should be at the end of the interview instead of beginning with it.

Having recruited for the marketing agency for over two years , he said this wasn’t his first time coming across such a candidate.

“Surprisingly, this is the second time I have experienced this kind of interview. The first one was actually a proper interview where we asked him to come into the office.

“I guess it was something similar like this where the applicant asked what the company can offer him instead of what he can contribute to the company.

“Because as employers, we also want to know what’s best for the team and what character can best suit the team.”

Talking about the most common mistakes with applicants, Knight said that lack of preparations and not understanding the job scope was common ones apart from lack of common courtesy and ethics.

Even though the applicant is a fresh graduate, Knight dismissed the thought that Gen-Z had an attitude and behavioral problem.

“I like to think this is actually an individual problem instead of a generational problem.

“One interesting thing about Wolves Digital is that most of our staff are Gen Z’s.

“I can see that the Gen Z are actually very talented, driven and also very passionate.”

Lee’s post has garnered over 7,000 likes and has been shared over 14,000 times on Facebook with users commenting that the applicant lacked basic manners.