A room of one’s own: How an art community came to life in Kampung Attap

KUALA LUMPUR, July 2 — It’s increasingly common for old, dilapidated buildings to be rejuvenated into boutique hotels or fusion-themed cafés. Far rarer for a slice of the history to be imbued with fresh life, one that’s still in the process of transforming and understanding the world around it.

One could make a decent case study of the Zhongshan Building in Kampung Attap.

Once a row of 1950s interconnected shophouses, the Zhongshan Building used to house the Selangor Zhongshan Association, a frozen foods distributor and various merchants over the years.

Today, spearheaded by OUR ArtProjects, a contemporary art gallery founded by Liza Ho and Snow Ng, the building has been transformed into a vibrant independent arts hub. 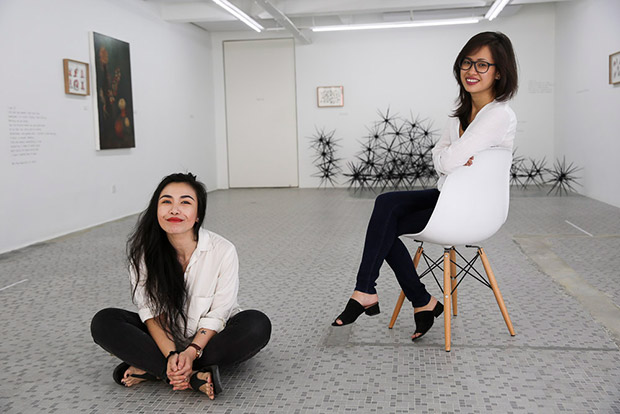 Both discovered a mutual love of art management and started OUR ArtProjects in 2013. Ho says, “We began by curating pop-up art exhibitions but when my mother-in-law inherited this building, we saw an opportunity to do more with it.”

OUR ArtProjects operates its gallery on the ground floor of the first building, No. 80, but given the extra space, the duo decided to lease out the rest.

Ng says, “After receiving funding from Think City, we began the process of restoring the building while keeping as much of it intact as possible, such as its distinctive façade.”

(Think City, a not for profit subsidiary of Khazanah Nasional, is a champion of urban rejuvenation; one of its objectives is to make cities more liveable.)

Interestingly, an artist who had his show at OUR ArtProjects earlier this year explored the theme of the transience of living spaces. 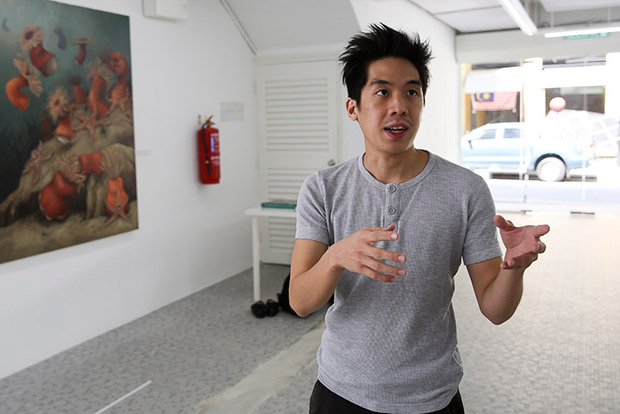 Artist Mark Tan had his debut solo exhibition Arrangements at OUR ArtProjects earlier this year.

“My work is about transformative spaces,” says Tan, casually barefooted a la Peter Jackson. “I’m always struck by the changes in Kuala Lumpur every time I return from the UK. Happily, the space at OUR Art Project fits the theme of what I’m doing. I really appreciate the communal vibe here at the Zhongshan Building.” At the time of our visit to the space, Writhing, a series of medium scale paintings and small sculptures by up-and-coming Filipino artist Bree Jonson, was on. The exhibition had an aquatic theme with Jonson’s paintings of anemones and sea urchins exploring the duality of seductive beauty and darker, hidden predatory instincts. Writhing, a series of medium scale paintings and small sculptures by Jonson.

One floor above OUR ArtProjects is risograph printing studio A Good Reason. Founded by Chai Suek Mei and Driv Loo, the outfit’s design doctrine harks back to the nostalgic days of the 80s when risograph or RISO printing was first created by the Japanese manufacturer Riso Kagaku Corp. 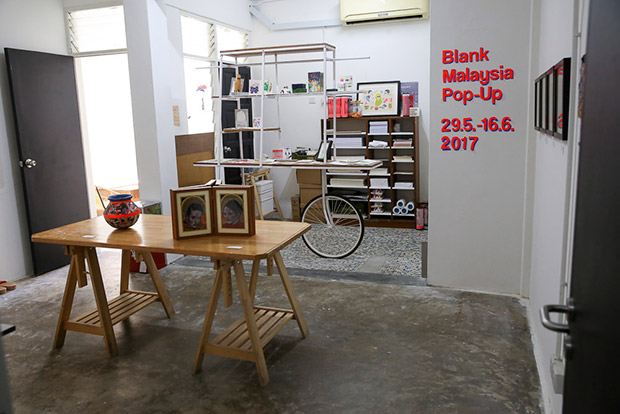 Display of works by risograph printing studio A Good Reason.

Not unlike the love child of a mimeograph printing system and a high-speed photocopier, the risograph can duplicate prints and produce an array of retro-looking books and comics. Around the corner from A Good Reason is the standing café-bar Piu Piu Piu, helmed by barista-bartender Unagi. Zhongshan Building tenants congregate here for coffee brewed with a house blend courtesy of Malaysian roasters Aim Coffee or a bottle of beer or two (lagers and pale ales are available).

“I just wanted a space where folks can hang around and chit-chat and have fun. That’s why I chose the name Piu Piu Piu, like the sound of a water pistol — ‘piu-piu-piu!’ Like being kids again,” says the friendly tattooed Unagi, who also makes his own leather products. 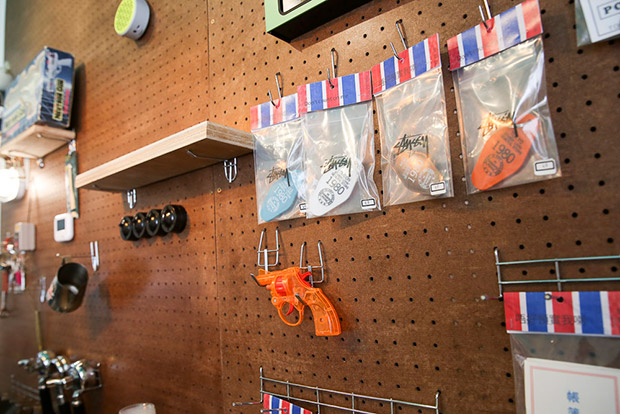 DIY aficionado that he is, Unagi also built most of the café décor from scratch.

Over at No. 82, the middle building, a trio of secretive enclaves await the curious visitor. On the first level, bespoke tailor Atelier Fitton is a classy haven for sartorial enthusiasts. 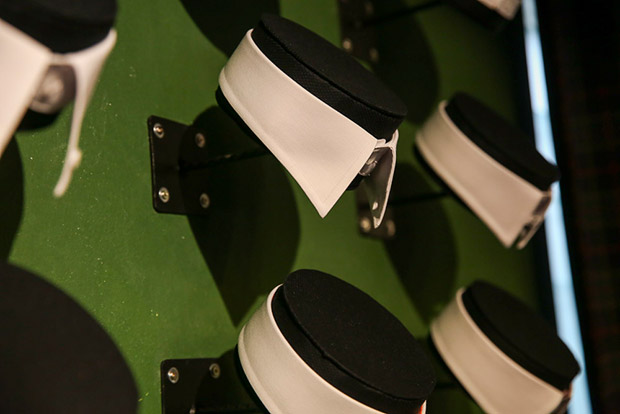 Led by Joshua Fitton and Misha Shah, the timeless aesthetic of Atelier Fitton extends to what resembles an elegant English drawing room. Attention to detail is key, be it the cut of a bespoke suit or walls the colour of green baize. 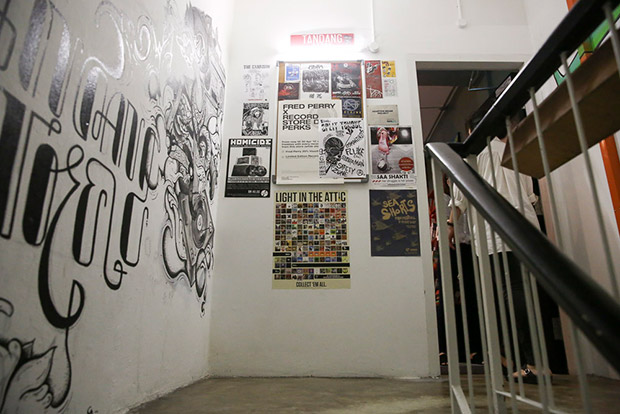 Started by music lovers Alak Idle and Wan Hazril, Tandang Store feels like the rabbit hole Alice fell into to reach Wonderland — a wonderland of a record store where you could spend hours immersed in reggae, jazz or even punk. 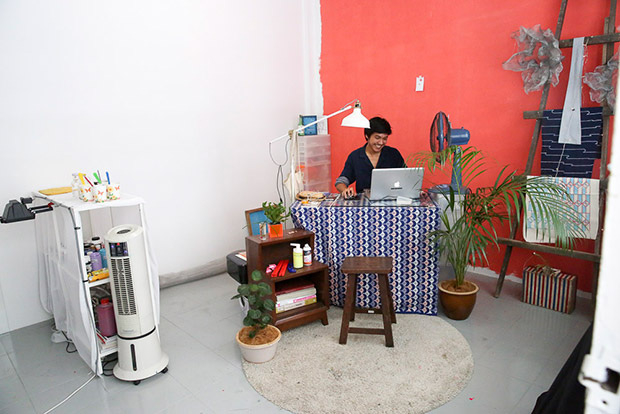 Silkscreen virtuoso Ibnu is concealed in a corner unit on the top floor, where he experiments with different techniques to conjure up enigmatic silkscreen art and colourful silkscreen merchandise.

He says, “It’s quite magical — having both a private space of my own to create as well as being surrounded by a group of like-minded artists and art lovers to inspire one another.” The 1950s design of the building also inspired Ibnu to carve a spot on the rooftop for his pursuit of tanning, complete with a canary-yellow deck chair and beach parasol. The elfin artist is disarming when recollecting a bashful episode: “I actually got locked in my studio more than once! Luckily I could call Liza and Snow to come ‘rescue’ me.” 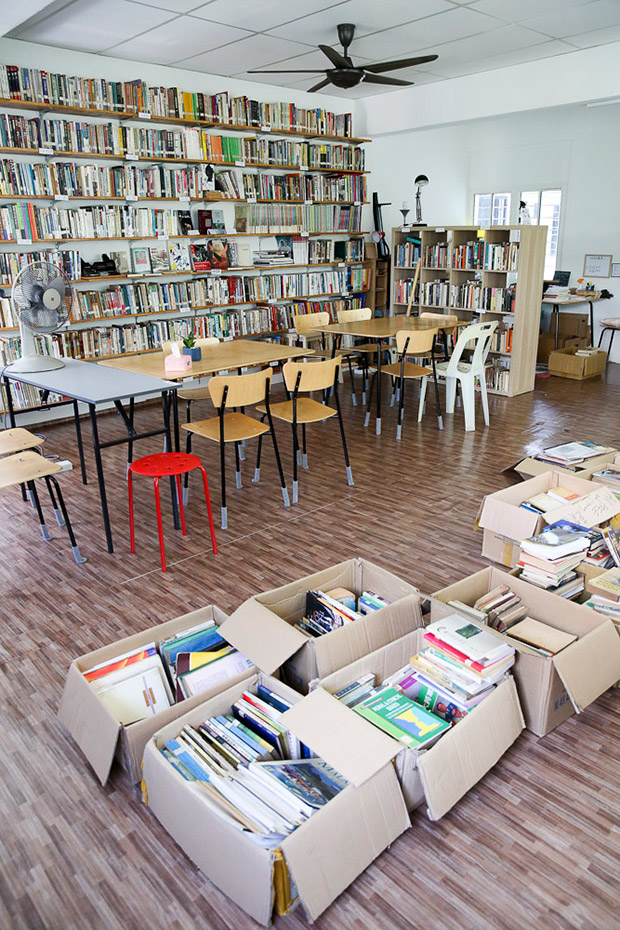 The Zhongshan Building has several “libraries in progress” including the Malaysia Design Archive, Rumah Attap Library and Collective, and Rice Cooker Archives.

The third building, No. 84, is a space for collections and repositories. There’s the Malaysia Design Archive, a resource of Malaysian design work that is also preserving our local design and visual legacy. The Rumah Attap Library and Collective is simultaneously a physical library — where the public may exchange books and thoughts related to art, literature and culture — as well as an “imagined space” where ideas and discourses intersect. The light-filled corridors outside the law firm Muhendaran Sri. There is even a law firm, Muhendaran Sri, whose husband-and-wife team, Ho assures us, fits the Zhongshan Building’s artistic philosophy as they are avid art collectors. It’s good to know that artists, struggling or otherwise, have advocates.

Muhendaran proves his collector’s eye by pointing out the marble frog stools — left behind by the previous occupants — taking centrestage in their upper-level courtyard.

Sri, meanwhile, is ebullient about the natural light suffusing their office, adding, “Look at the green views outside my office window — nothing like staring out into Mother Nature!”

Building 84 is also where the Living Room, the meeting area for the Zhongshan Building tenants, is located. Naturally, the entire room is decorated with artwork, transforming an otherwise dull discussion space into a fount of creativity. There’s always a tenant or two enjoying their cuppa outside Piu Piu Piu.

Each tenant has a “room of their own” yet there is space here for them to come together also. As Ng puts it: “Here, we share our challenges, especially dealing with renovation since it is an old building and everyone has limited funds. Solving problems together brings us closer.” 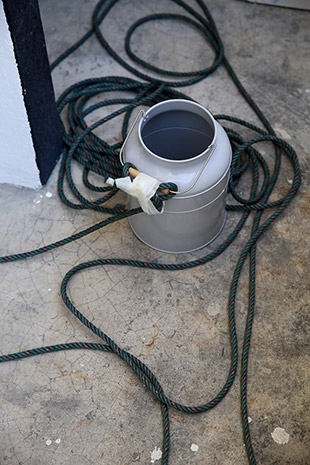 An old-school bucket and rope to get drinks from downstairs.

Back at Piu Piu Piu, some of the tenants are sharing a joke while sipping on Unagi’s excellent espressos and taking leisurely puffs on their cigarettes. The ambience does remind one of a very bohemian Parisian collective. One of them even uses a bucket and rope to get drinks from the kakak from the food court opposite the building.

“This isn’t just a community; it’s a family,” says Ibnu. I believe him; though I’m not part of their community, I’m made to feel welcome, as I would by a family in their home.

The Zhongshan Building, according to Ho, used to have families living above the shophouses. And, looking at the happy faces around me, there still are, today.