Mariupol, under heavy bombardment, buries its dead by roadside

People dig a grave for victims killed during Ukraine-Russia conflict in a street in the besieged southern port city of Mariupol, Ukraine March 20, 2022. — Reuters pic
Follow us on Instagram, subscribe to our Telegram channel and browser alerts for the latest news you need to know.

MARIUPOL, March 21 — Andrei is busy burying dead neighbours in a makeshift grave by the roadside, opposite a bombed-out apartment block. Natalia wonders whether her own home is still standing, while a family frets over how long their dwindling food supplies can hold out.

Sunday marks just another day of horror and confusion in Mariupol, the port city in eastern Ukraine that has seen some of the heaviest bombardment and fighting since Russia began its invasion on February 24.

Pausing with his shovel, Andrei said the neighbours he was burying were not killed by Russian shells or grenades but had died of ailments exacerbated by the huge stress of the past few weeks after being unable to get medical help.

“The bombs did not kill them but all this... the situation — the basements, the lack of physical activity, the stress, the cold as well,” he said.

Nearby several bodies lay covered in dirty blankets. Some people trudged past carrying their belongings in plastic bags or cardboard boxes. A boy pushed a supermarket trolley past a bombed out car.

Andrei said he and his friends were advised by Ukraine’s military to store the dead bodies in cold basements, but these are already filled with people sheltering from Russian artillery and missile attacks.

“I hope there will be some sort of a reburial and this is just temporary,” he added, gesturing to the hole in the ground. 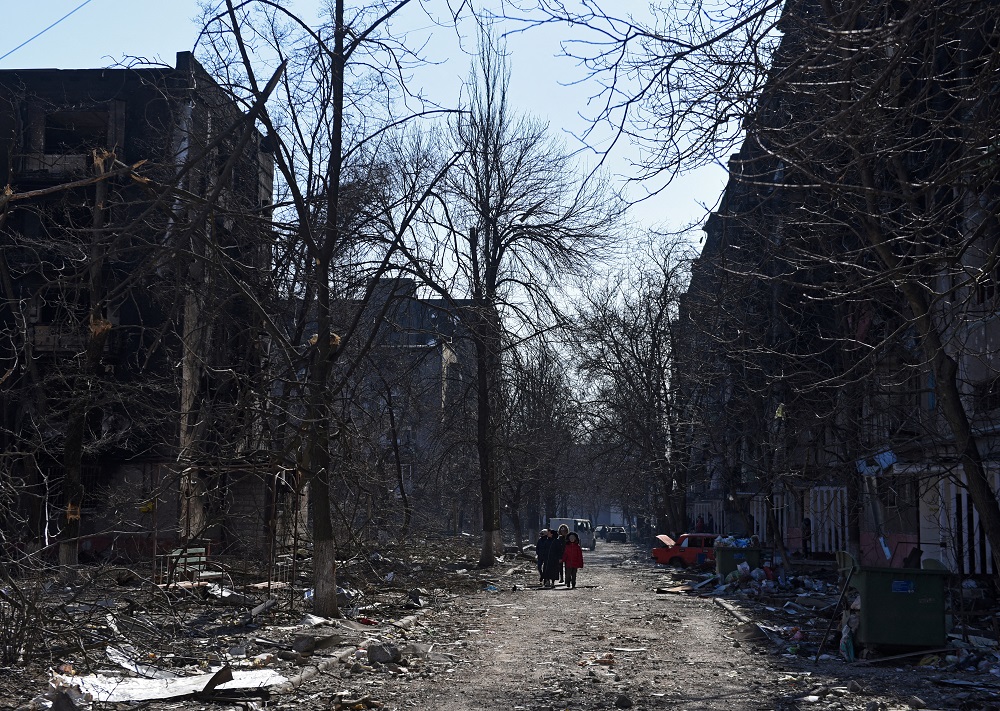 Some 400,000 people have been trapped in the strategic port city on the Sea of Azov for more than two weeks, with little if any access to water, food, heating or electricity, local authorities say.

Ukraine’s President Volodymyr Zelensky said on Saturday that Russia’s siege of Mariupol was “a terror that will be remembered for centuries to come”.

Russia’s Defence Ministry blamed “Ukrainian nationalists” yesterday for what it called the “humanitarian catastrophe” in Mariupol and gave the city until the early hours of Monday to surrender. It said 59,000 people had been evacuated from Mariupol in the last three days, TASS news agency reported.

Sitting in a basement that has now been her home for 11 days, Irina Chernenko, a librarian at the university, said she did not know how much longer they could survive like this.

“We hope for the best — to live as human beings. The apartment block is destroyed, everything is destroyed. Where can we go from the basement?” she said.

“We’re cooking at a fire. For now we have some food and some firewood. In a week we will have nothing, no food at all.”

Some parts of the city are controlled by Russian forces and some remain under Ukrainian control, so residents do not know the fate of relatives who live in other districts.

Natalia, a kindergarten worker, said she was staying with her children and could not return to her own flat across town.

“There is no news, no information. Everything is ruined... We don’t know how we will live now.” — Reuters