APRIL 22 ― As a Malaysian, I grew up believing in forgiveness and mercy. Those who are surviving on death row are mentally unsound or develop problems with their mental health due to the death penalty phenomena.

Being on death row is intensive and causes a lot of mental strain, which was what Nagaenthran and countless others on death row had to endure daily.

Singapore, it's time for you to show the world that you're a nation of forgiveness and mercy.

Nagaenthran has been on death row for more than a decade, and Singapore had caused irreparable damage to his life by locking him up in a cell for a minor offence and for worsening his mental health by putting him in solitary confinement.

Tears filled my eyes ― in today’s day and age where we are trying to make society better, I am getting the despicable and cruel news that a progressive nation wants to hang a mentally unsound man.

My heart sunk in sorrow thinking about Singapore’s inhumane decision. The Singaporean judicial system does not have any accountability. We can’t file lawsuits on behalf of death row inmates that are suffering from poor mental health.

Nagaenthran could have been rehabilitated, he could have been doing some activities or labour to divert his mind, but just because he is on death row, he has to be locked up 24/7 in a condemned prison cell. He doesn't come out unless he is handcuffed. He is almost an animal in a zoo, except his plight is even worse. His daily routine has been the same for decades. He doesn’t get any sunlight or human interactions.

What is the point of locking him up with such high security? His physical and emotional health is ruined. 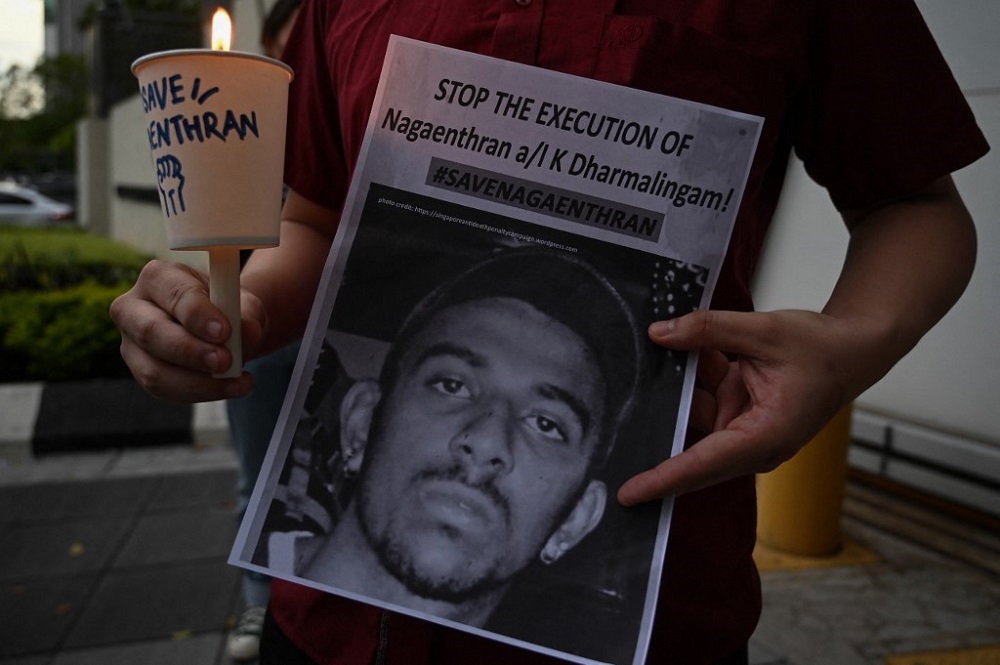 An activist holding a placard attends a candlelight vigil against the impending execution of Nagaenthran K. Dharmalingam, outside the Singaporean embassy in Kuala Lumpur on November 8, 2021. — AFP pic

We need to show Nagaenthran some love. He must have missed so much love and human compassion in the past decade from being locked up alone. By focusing on rehabilitation for the death row, their mind and mental health can be changed for the better. They will start feeling that they are destined to be more than a drug mule from a community that no one cares about.

Dear Singaporeans, I would like to beckon you to re-evaluate your stance on crime. Your country desperately wants a drug-free title but still a high level of amounts of drugs is going into the country in numerous other ways.

The number of drug mules in Changi Prison is reflective of the demand for illegal drugs in the country, among the residents, despite the death penalty existing as a punishment.

When we’ve made mistakes? Why deny others this right then? We need to look within and find the compassion within ourselves to forgive.