We are set for another gargantuan test ahead as a nation. The severe floods that have plagued Selangor and Pahang in the last week is potentially a precursor to a nationwide flood that will hit many more towns and cities. So much is what we can predict from the National Security Council’s sounding of a chilling alert to mobilise all flood response machinery nationwide yesterday.

Even if — with the sincerest of prayers and wishes that — no further floods will hit, the current situation in Shah Alam, Bentong, Mentakab may spell far reaching consequences beyond flood rescue, evacuation, shelter, resettlement, recovery. Lest we forget, the pandemic is still raging with Delta and Omicron within our shores.

There have been no less than 70 countries worldwide that have been hit with catastrophic floods that displaced entire communities since the pandemic started — almost all cases record devastation way beyond the flood itself. The multi hazardous nature of this disaster and it’s cascading immediate impacts are evident, yet its depth and breadth when compounded with covid related economic hardships is not yet fully understood. 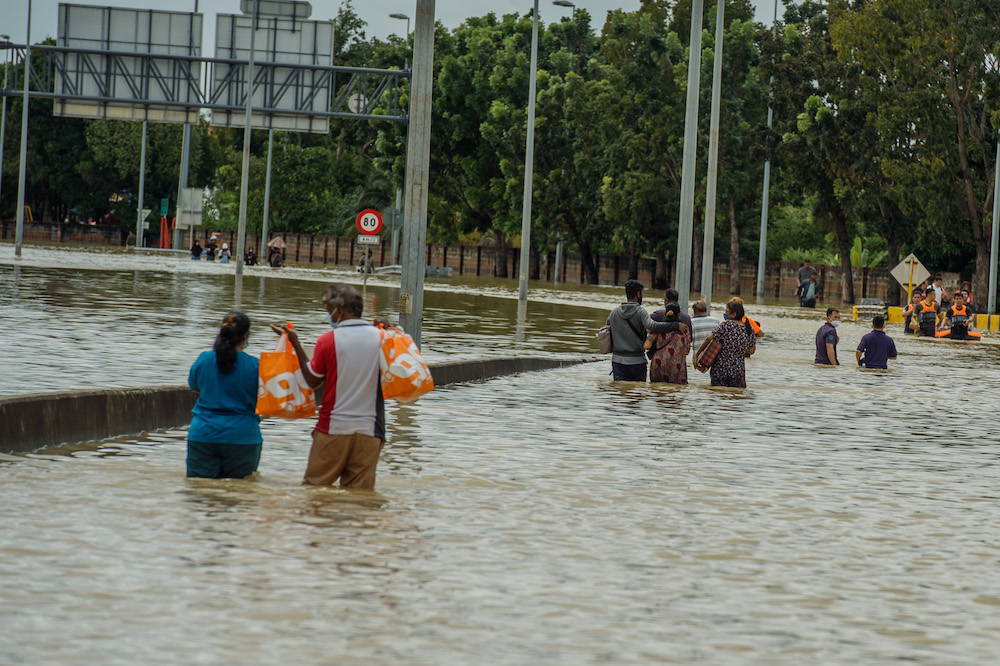 A flood is definitely a threat multiplier for virus transmission, as it is unrealistic to compel and observe physical distancing during evacuation, rescue and sheltering. Hygiene levels will inevitably be compromised, especially with the ceasing of treated water supply and electricity for days on end.

For those stranded in high density living quarters, sharing and distribution of supplies force gatherings in less than ideal settings. Drinking water, non-perishable foods, diapers, candles, sanitary towels are understandably prioritised by flood victims in comparison to facemasks and hand sanitiser. Another chillingly telling item that was high in demand, was painkillers; in which I personally distributed upon request no less than 100 blister packs in an hour, out in the epicentre of the floods in Taman Sri Muda.

Reports of colonies of rats in the hundreds seeking higher ground suddenly, even contesting human spaces during the most stressful and urgent moments when the water initially started rising can be psychologically scarring for those who experienced it first-hand. This is before even considering the health hazards of leptospirosis and other rodent borne diseases if they were not evacuated.

Contaminated water on open wounds, foods and water may also likely contribute towards a post flood public health crisis. Vector, rodent, and waterborne diseases during floods are undoubtedly another potential threat multipliers in current circumstances that are more than likely already spreading fast.

There is also no way of telling how widespread and prevalent the Covid-19 virus is among the tens of thousands of flood victims, citizens and undocumented migrants alike. Those involved in the rescue and recovery missions are also highly susceptible to transmission through no fault of their own; but those deployed for official duties as well as volunteers who stepped up to the plate to offer assistance may carry another wave of transmission beyond the flood affected areas upon their return home.

We must not underestimate the potential public health fall out as a result of these floods. Almost all political parties, a large number of NGOs, and countless individuals have flocked to the most affected areas with supplies, resources and their time to help with everything that is necessary. Despite the tardiness of the federal government’s response that was partially made up for by — albeit limited yet much appreciated- military intervention, much is being — though far from perfect — done as we speak on day six at the time of writing.

But we must be aware of, and prepare for a potential infectious and communicable disease epidemic on top of another attack surge by the pandemic, set against the catastrophic background of a post flood fall out. Equally pertinent are the high likelihood of large swathes of flood victims will immediately be relegated from being employer to employee, employed to underemployed or unemployed, working class to poverty. Questions that not only beg answering but compel answers in the affirmative are;

As for questions that are running in the minds of many a flood victims, especially young, early career new families are;

The list of questions goes on and on. But there is an overarching question that is left unanswered; what the government is doing and is going to do about it. As of now, the federal government and its ministers are still busy organising flood relief launching ceremonies and handing out financial assistance in front of large LED screen backdrops in hotels.

I urge the government to address these questions immediately, and break the deafening silence that is severely affecting tens of thousands of flood victims, volunteers, and relief workers alike.

The government must act now to prevent risk multipliers from turning this natural disaster into an irreversible public health catastrophe. The prime minister and his cabinet must also do everything in their power to not only provide immediate flood relief, but also short- and medium-term financial relief through policy interventions.