OCT 16 — Income inequality has fallen sharply in Malaysia. The divide between rich and poor phenomenally narrowed the past few years. If only you knew.

Judging by public discourses and perceptions, most people do not know. And most of the time we talk about inequality, we hear the opposite: inequality has been rising and rich-poor gaps are widening. Writings on our socioeconomic condition, such as the commendable Rich Malaysia, Poor Malaysians by Anas Alam Faizli, largely argue that the benefits of economic growth trickle down to the masses much less than the affluence sucked upwards to the rich.

The government knows about this massive decline in inequality; our official statistics plot out the trend. The Gini coefficient, a figure between 0 and 1, is a widely used, simple and effective measure of inequality. The higher the Gini, the more unequal the distribution.

Visualising it helps. Malaysia’s Gini coefficient series shows a clear downward trend in household income inequality from 2004 to 2012, after which it falls off a cliff. In 2014, inequality plunged to the lowest level ever. 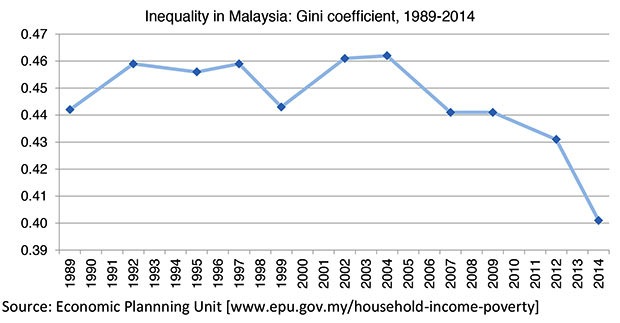 These calculations are based on the Household Income Survey, a large and nationally representative dataset, and the best resource for computing income statistics. But are we handling the dataset properly?

The latest inequality figures painfully stretches the limits of plausibility. The data have been reported, without any attempt to explain possible causes for such a spectacular outcome. Even if we can rationalize this downtrend in inequality, could it have dropped so steeply?

Corresponding to the fall in overall inequality as captured in the Gini coefficient, income growth at the bottom segments is exceedingly high. From 2012 to 2014, the bottom 40 per cent enjoyed household income growth of 15.9 per cent PER YEAR, the middle 40 per cent saw a 10.7 per cent annual rise and the top 20 per cent got 8.1 per cent.

Curiously, the government itself whispers softly about this outstanding success. It almost seems as if Putrajaya does not want us to know much about it. I can think of two reasons. First, the record has simply escaped attention; second, the record plainly defies logic.

Maybe we are just not in the habit of tracking inequality in total. For decades we have instinctively paid close attention to inter-ethnic inequality and cared less about general rich-poor disparity. We may also not realize how awesome Malaysia’s record is when compared to the world. I exaggerate not. Rising inequality is a true tale of our times, a problem that makes many governments sweat. The uptrend in inequality is documented and vigorously analysed in rich countries. The steadily growing major Asian economies of China, India, Indonesia and South Korea have registered increases in inequality, according to a landmark Asian Development Bank report.

A few places have bucked this trend, most prominently Latin American countries like Brazil, Argentina, and Mexico, whose experiences are examined in scholarly work.

The narrowing of inequalities in these countries is attributed to two main factors: declining wage gaps between tertiary educated versus less qualified workers, and expansion of pro-poor social assistance, such as cash transfers.

Malaysia’s Gini coefficient shrank by an exceptionally high 1.32 per cent per year between 2004 and 2014. Thirteen Latin American countries on average recorded a 0.96 per cent reduction per year in the 2000s.

Malaysia has handsomely outdone these fellow middle-income countries. Any other government would go to town trumpeting this success, but Putrajaya zips its lips.

This odd silence raises another possibility: these numbers do not just escape notice, they also defy logic. Perhaps the government does not fully trust its own statistics? The Eleventh Malaysia Plan blithely noted that the Gini coefficient had touched 0.401 in 2014, surpassing the target of 0.420 by 2015. This is a splendid overachievement! But again, no further comment, no attempt to explain how it happened.

Without access to the Household Income Survey raw data, we cannot go beyond inference and speculation on the credibility of Malaysia’s mightily perplexing decline in inequality.

What is certain, however, is that the official report has overlooked stark red flags.

Take the inequality trend within the Indian Malaysian population (Figure 2). These figures are reported in the Household Income Survey Reports, but omitted in the Malaysia Plans. From 1989 to 2012 we observe a sustained increase – with some fluctuation – in disparities within the community: the Gini rises from 0.390 to 0.443.

Rising inequality among Indian Malaysians has recently been recognised as a policy priority, only for the data to show the trend is already reversed. After expanding for 23 years, in two years (2012 to 2014) inequality basically shrank back to its 1989 level. Is anyone seriously buying this? 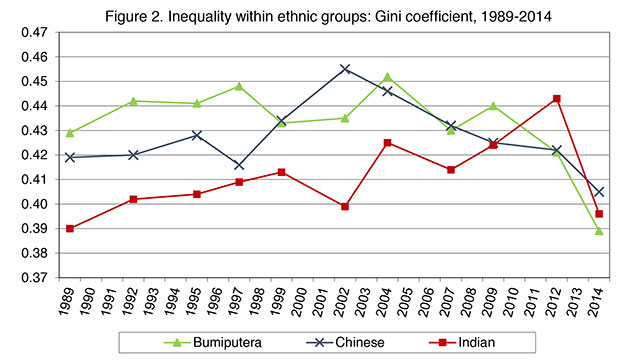 More amazing developments have taken place far north, if we are to believe the official account. Inequality statistics within states throw up some mystifying results, especially in Perlis, where the Gini coefficient, like a stone in water, went from 0.455 in 2012 to 0.346 in 2014.

To put this in perspective, the scale of Perlis’ inequality reduction is equivalent to the United States, with its brand of brawny capitalism, transforming into the Netherlands and its mode of northern European welfare capitalism – all within the space of two years (In the last decade the Gini coefficients of the US and the Netherlands were, respectively, 0.408 and 0.309).

No reform or social policy can redistribute so much income in so little time – it takes a revolution. Was there a socialist uprising in Perlis that I missed?

Undeniably, we have seen some inequality-reducing interventions in the past few years – chiefly, Bantuan Rakyat 1Malaysia (BR1M) cash transfers and minimum wage. But the scale of these measures do not tally with the dent in national inequality. BR1M payments amount to only RM55 a month. Likewise, minimum wage kicks in at a mere RM900 per month for the Peninsula and RM800 for Sabah and Sarawak, and has largely affected foreign workers who are excluded from the official inequality statistics.

Let me state clearly that I am certain there is no deliberate manipulation of data, no attempt to deceive us with doctored reports that are contrary to some other objective accounts. But many of the numbers are too implausible based on what we know, and unbelievable without further substantiation.

One possible explanation derives from artificial addition of imputed rent to household income. Imputed rent is market valued rent of owner occupied houses that is added to household income, even though no such payment is actually received. Is this being over-calculated, particularly for low income households? Super high income growth in the low-income segments may also be due to over-counting of government welfare payments and gifts in kind. Who knows? I’m still stumped on what could drive the drastic drop in inequality within the Indian population and inside Perlis. These are mysteries that demand to be solved.

It is also worth noting that the World Bank’s Malaysia Economic Monitor put the 2014 Gini coefficient of gross household income at 0.421, exceeding the government’s calculation of 0.401.

But enough of highlighting aberrations and discrepancies. What we need is for government and citizens to strive together for clarity on these vital bits of information, which shape policies and track progress. And for this to work, the income data must be made accessible to the public – without restriction and at minimal cost, if not free. Data collection is fully paid with taxpayers’ money.

For the millions already spent collecting the income survey data, the rakyat deserve to get much more than inequality statistics that the government itself does not seem to believe.

* Dr Lee Hwok Aun is Senior Lecturer in the Department of Development Studies, University of Malaya.

* This is the personal opinion of the writer and does not necessarily represent the views of Malay Mail Online.