The singer has been editing Rosé into his pictures for the past month and diehard K-pop fans have been having none of it. — Screengrab via Instagram/@naimdanielx
Follow us on Instagram, subscribe to our Telegram channel and browser alerts for the latest news you need to know.
By MARK RYAN RAJ

PETALING JAYA, Dec 23 — Local singer Naim Daniel has been on the receiving end of threats and criticism from K-Pop fans after editing Blackpink’s Rosé into his pictures.

The 22-year-old has been editing Rose into a number of his photos on social media recently which has not gone down well with avid fans of the K-Pop group Blackpink, called “Blinks.”

Many fans were not amused, as Naim shared reactions in a screenshot of an intimidating direct message that one extremely angry fan sent him on Instagram.

The fan was clearly upset with Naim’s antics, threatening the singer for using Rosé in his pictures and attempted to unnerve him by saying he’d be “finished” if he did it again.

“Hello, I’m sorry to disturb you. There’s something I want to discuss with you. Listen to this, stop posting your pictures with Rosé,” wrote the fan.

“You hear me? You think just because you’re an artist you can do that? **** you, if I see you post about Rose Blackpink again you’re finished.”

Despite the fan’s annoyance with his postings, Naim took the threat lightly as he joked that his feelings would get hurt by using such vulgarity against him.

“I’m soft please don’t hurt me like that. It’s Rosé by the way, not Rose,” wrote Naim.

In the past few weeks, Naim has posted four different photos onto his Instagram account with Rosé in it, along with a Youtube video of a “duet” by him and the Korean artist.

did a very special project with the one and only @roses_are_rosie out now on my youtube channel, link on my bio x

The video is of a song cover done by Naim, titled Eyes Closed, which he uploaded onto his Youtube page last Friday featuring Rosé in the picture, possibly as a publicity stunt to promote the cover.

Since it was uploaded, the video has since gotten over 40 thousand views with just over five thousand likes. 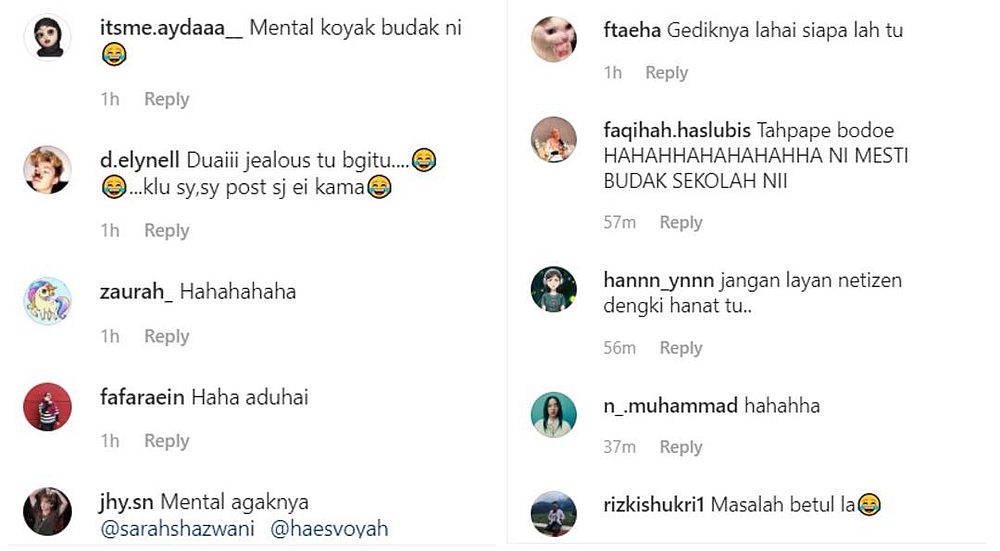 Social media users have a laugh at the angry fan. — Screengrab via Instagram/@naimdanielx

Meanwhile, some social media users were amused by the antics of the fan, taking jibes at the angry fan.

Ractions varied from laughing at the fan saying that they are just jealous and needed to grow up, to the mention of hope from Naim’s fans who wish for him to perform with Rosé on stage one day to finally make his photos come to life.

“Who can make this a reality? Naim featuring Rosé on one stage! We want to see them collaborate immediately,” wrote a user.