'Pisan zapra': Does it even mean anything?

FEBRUARY 23 — Malaysians have a deep relationship with bananas that is undeniable.

After all, the multipurpose fruit and plant is native to the region, according to my father whom I regard as my designated expert on all things fruits, and who seemingly cannot resist buying bananas especially as a snack first thing when he arrives at an unfamiliar country.

Obviously we eat the fruit; raw and cooked in a myriad of ways, from cooking unripe ones in coconut milk to an assortment of steamed kuih and fried — so much so that “selling like hot goreng pisang (or is it pisang goreng?)” is an idiom that locals can immediately picture in their minds.

Which is why there is a Malaysian term called pisan zapra, which means a measure of “the time it takes to finish eating a banana.” Which is apparently “roughly two minutes.”

Haven't heard that phrase, or used it, ever in your life? Yeah, me too.

Neither have the many Malaysians who railed at @qikipedia — the Twitter account of the BBC trivia show QI (which stands for Quite Interesting) — earlier this week for featuring pisan zapra and its alleged meaning as its Phrase of the Day.

For starters, it is spelt pisang. And zapra was never a Malay word.

“On behalf of all Malaysians: SOURCE or GTHO,” said a reply by user @YaminLawut.

What baffled me the most was, that was not the first time I saw pisan zapra featured by QI, nor was it the first time I ever saw the term being bandied about. And in almost every case, the term is touted proudly by Western publications.

Take author Josh Pachter, a 69-year-old author from New York who among others made his name with his stories of Mahboob Chaudri, “a Pakistani native working as a police officer in the Bahrain.”

In November 2016, the Alfred Hitchcock Mystery Magazine published Pachter's short story titled Pisan Zapra about a British “expat” couple in Malaysia, a murder (told in the time needed to eat a banana, of course), and pontianak — the last Pachter said he found out about on the internet.

Pachter's description of teh tarik being made from oolong tea, and him calling the Malay maid “ayah” (I think he meant “amah” instead) were not the most cringeworthy moments in it.

In a blog post, Pachter said he found pisan zapra from a book called Lost in Translation: An Illustrated Compendium of Untranslatable Words from Around the World by British writer and illustrator Ella Frances Sanders.

Sanders had promoted the book on her website as being on the New York Times bestseller list for four consecutive months, and winning the Amazon Best Book award in 2014, selling 100,000 copies.

A review by BBC Culture showed Sanders' page on pisan zapra in all its ugly glory. 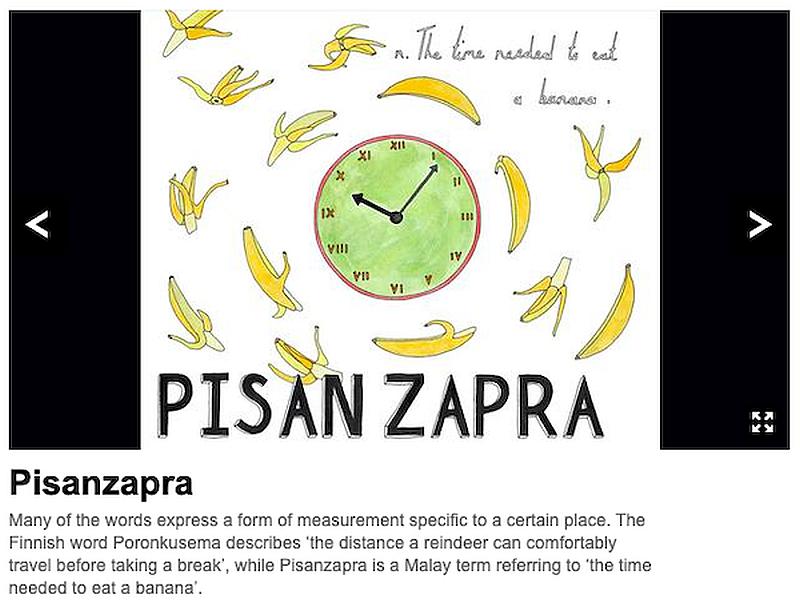 “PISAN ZAPRA” in a bold typeface, below some flying bananas, some half-opened, circling a clock showing 10:05. “n. The time needed to eat a banana,” it claims.

I mailed Sanders and her literary agent Jennifer Weltz at Jean V. Naggar, wondering how in the world she had stumbled upon the word. None have yet to reply.

It made one wonder how an editor could have allowed such a major blunder to be published. Could they not at least check with a Malaysian? If pisan zapra csn slip through, could there be more language blunders in the book?

Or perhaps they just do not need to bother, as white writers can get away with these mangled attempts and still not only get published, but win awards?

But it was more likely they had relied on one singular source, someone from the Anglosphere whom they felt was respected enough to refer to, that they felt there was no need to consult an actual Malaysian.

This led me to London-based author Adam Jacot de Boinod, who himself is a respected writer and self-proclaimed “lover of foreign words.”

In 2007, he wrote a book called The Meaning of Tingo, a collection of “extraordinary words” in many languages across the world. It was a delight to read, and the Malay words featured in it were mostly accurate, if not slightly obscure for some.

“Malaysian movements” got a feature in the book, described as a specialised vocabulary by the “elegant Malaysians” to describe movement, with words such as kontal-kontil, kengkang, kapai and gayat... but also weirdly-spelt tenjack and jerangkang which were new to me.

In 2010, he wrote a sequel titled Toujours Tingo. I believe this was the first time ever that pisan zapra surfaced, and was then subsequently quoted by many content farms and websites banking on readers' fascination with the Weird Other.

“Many of the more unusual words relate closely to the local specifics of their cultures,” de Boinod wrote. “It's surely enriching to know that in Malay pisan zapra is 'the time needed to eat a banana.'” Other words such as the Finnish poronkusema, and the Malagasy manàntsona shared the same paragraph.

We have yet to know how de Boinod found this “Malay word.” I have not found a way to get in touch with him at the time of writing, and I cannot wait when I do.

In The Meaning of Tingo, de Boinod wrote that he found his love for foreign words while researching for QI, so you would think the story has now reached a full circle.

However, roughly a day after contacting QI to find out its source for the tweet that started this pursuit, a representative replied: saying that its source has been a BBC article all along, specifically the review of Sanders' book, rather than de Boinod himself.

“A BBC online article is on our list of trustworthy sources but, on this occasion, it seems to have let us down,” it said, also adding that the tweet has been taken down following “negative response.”

There has yet to be an ending to this delightful but also frustrating story, but acquaintance Danny Mahes has since proposed a possible scenario on how de Boinod may have heard the word pisan zapra in Malaysia.

Zapra, Danny suggested, may have come from the Tamil word sappuran.

If this is what actually happened, then you can bet somewhere now a Tamil speaker is surely laughing his ass off.