Pakatan should have been there in full against Pota 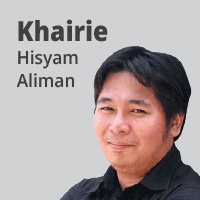 APRIL 8 ― So the Prevention of Terrorism Bill (Pota) was passed in the wee hours of Tuesday this week, unchanged. The voting was 79 Barisan Nasional Members of Parliament (MPs) in favour of passing the Bill against 60 disagreeing from Pakatan Rakyat.

Wrong. Past experience suggests that even if all Pakatan Rakyat parliamentarians were present, Barisan Nasional would have bulldozed the Bill through anyway.

To illustrate this, let us go back to December 2009 when the Supply Bill 2010 (also known as the freaking 2010 Budget) was being voted on. Barisan Nasional were a little low on MPs at the time so they urgently called back some to take part in the voting.

“I got a call from someone in Parliament asking me to rush to Dewan and that a voting is being conducted in the Supply Bill,” said then-deputy minister of Federal Territories M. Saravanan as quoted by Malaysiakini. “I was in the nick of the time as the Speaker allowed me to cast my vote. To my relief later I learnt that the Bill was passed by a very tiny majority.”

And he was not exaggerating by “tiny majority.” The Bill was passed by 66 votes in favour compared to 63 against from the Opposition side. Among those who were called back was the prime minister and the deputy minister, according to Malaysiakini.

On this incident Dewan Rakyat speaker Tan Sri Datuk Seri Utama Pandikar Amin Mulia ticked off the Opposition for attempting to catch the Barisan Nasional side off-guard with the voting.

The takeaway from this incident is that Barisan Nasional is not easily ambushed when it comes to Parliamentary voting and whatnot. There is probably a system to ensure whatever the coalition wishes to pass will pass despite MPs skipping sessions.

Therefore if there had been 80 Pakatan Rakyat MPs voting, the other side would likely have mustered more on short notice. And the end effect is the same: the Bill would have passed.

But this is not me defending the 26 Pakatan Rakyat MPs for being absent. This is me being realistic.

And while it is hard to see any other outcome than the Bill passing had the 20-something Pakatan Rakyat MPs attended the session that night, the people they represent in Parliament have every right to be upset that they were no-shows.

A number of Opposition lawmakers defended their missing colleagues, according to a Malay Mail Online report.

PAS Shah Alam MP Khalid Samad said: “When tabling laws like this, they should give more time as the Act is not a small issue. Don’t make it normal practice to drag proceedings until 2am.”

PAS chief whip Datuk Mahfuz Omar, an absentee that night, said: “I had a planned engagement in Kedah.There was no instruction for us to be present. I did not know there would be block voting.”

PKR chief whip Datuk Johari Abdul, another absentee, made light of the matter: “Most of them were, only a few were not here and we had concrete reasons.”

To these, let me repeat what DAP MP Tony Pua said in the same report: “We were here. Of course there would be block voting, the point is to be prepared for that.”

The Prevention of Terrorism Bill issue is not a surprise issue that took Parliament by storm a few minutes before voting commenced. A copy of the Bill was made available on the Parliament’s website last week.

There had been plenty of time to see what the proposed Act entails and why it should be opposed. The outcome may have been inevitable but the show of fighting it counts, too. The MPs should have been there to express the opposition of those they represent, because absence indicates apathy.

Simply put, Pakatan Rakyat let 57 per cent of Malaysians down that night.