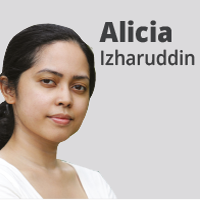 JUNE 26 ― An effective, if sometimes rather risky, strategy in dealing with sexual harassment in public spaces, defined as catcalls, being stared at, and other unwelcome lascivious looks and comments, is to look intently back at the perpetrators. Stop and stare if you must.

It is fascinating how many perpetrators of sexual harassment would take umbrage when the look is turned towards them. Because when women stare back, especially with the intensity that trespassed their personal space in the first place, they upset the sexual dynamics of looking.

In any unequal society, the sexual dynamics of looking is maintained when men look and women are looked at. In fact, to appropriate John Berger’s argument in his classic text Ways of Seeing, women watch themselves being looked at by men. This is perhaps the reason why women and girls are socialised to care about their looks a lot more than their male counterparts.

We’re reminded of this sexual dynamics of looking again recently. Many would have read, and laughed-out-loud at, the warning to straight Muslim women about “visual fornication” when watching men kicking about a ball in Brazil. The tragicomedy here is that a Muslim preacher took it upon himself to be a moral guardian of female desire, while eliding the queer gaze and the actual reasons why millions of people watch a ball being kicked around in a field.

The Islamic tradition of lowering one’s gaze, which is impressed upon both women and men, as a means of evading temptation is not enough to curb the social damage unleashed by the sexual dynamics of looking.

It does not explain why it is usually Muslim men who are assigned to expose “illicit” sexual behaviour in the name of Islam, why Muslim men are not immune to being perpetrators of sexual harassment and being enthusiastic consumers of pornography.

Historically, women have been denied the scrutinising and gazing upon the bodies of men, not least when such bodies were naked or partially undressed. This is one of the main reasons why there were so few female painters and sculptors of the European Renaissance, a period of great artistic achievement best represented by male nudes immortalised in marble.

Respectable women in Victorian Britain were denied access to images of the nude, lest looking at the undressed male and female body would corrupt their morality and shock their feminine sensibilities.

Having inherited our former colonial masters’ morality in sexual matters, it is rather likely that we have become model neo-Victorians ourselves in contemporary Malaysia and hung-up about female desire.

Combine the entitlement to look, control, and dominate with an anxiety about sexuality and you have a society where the moral police feel entitled to spy on couples in private acts of intimacy and self-righteous vigilantes on YouTube upload videos to shame others with a sense of moral superiority. Little do they realise that their moral superiority is actually buttressed by prurient voyeurism.

Voyeurism is about entitlement and desire accessed through looking without being seen. Understanding what voyeurism is, and how it actually operates beyond its limited definition in the domain of peccadilloes, is instructive.

Any kind of looking with fascination, prurience, with the purpose to possess, stalk, and control prevails in surveillance and other apparatus of social control. Looking while not being seen is done from a position of power ― how powerful one must seem to possess a God-like view of the world or the mechanical eye of CCTV.

In what some may argue to be the Islamisation of Malaysia, the visual economy of morality appears to be of particular import when controlling the populace. It sets the terms of who can and cannot look at certain acts and bodies.

But Datuk Daud Che Ngah needn’t worry about Muslim women committing “visual fornication” with their eyes. It is among the least harmful social phenomena in Malaysian society. Considering the pressure for women to look thin, sexy, and well-turned out in the public eye and in the media, the scale of male objectification is miniscule compared to that of women.

In fact, the infrequent instances of naked, half-naked, and eroticised bodies of men in the media usually elicit disgust, humorous and angry responses in a society determined to maintain heterosexuality and gender inequality.

Datuk Daud’s crusade against “visual fornication” would be better served in the battle against sexual harassment in public spaces and skodeng culture.