There is still hope

APRIL 11 — The recent passing of activist Irene Fernandez was greeted with great sadness not just by activists but also the communities she worked with. “She did good,” was the oft repeated phrase among friends and colleagues as they prepared to attend her wake and funeral.

I have never conversed with the late Irene Fernandez, but I did attend a few of her talks. She was one of the many female icons I grew up with, and her work was always a presence in my life. How could it not be? This city was built on the blood and sweat of migrant workers, the very people she cared for and defended.

In light of her passing, I’d like to highlight a few personalities who are “Irenes” in their own way. We will never forget the work the late Irene Fernandez did, but we must also remind ourselves that there are also other Malaysians who are as passionate about Malaysia as she was.

I recently saw the film-maker and activist Norhayati Kaprawi’s rough cut of her latest documentary, Ulama Perempuan, which was part of her API Fellowship project. Yati, as she is popularly known, is renowned for her insightful films on Muslim women and Islam in Malaysia. Ulama Perempuan sees her documenting the lives of Indonesian Muslim women preachers,who are the leaders of pesantrens and communities.

(Here, I would like to point out that in Malaysia, we DO have Muslim women who teach Islam, but it is set in a different group dynamic: these "preachers" or teachers meet with women in women-only classes, held at the mosque or in private homes. By the same token, we also do have Muslim women leaders who front NGOs such as PAS Muslimah, ISMA et al.)

Women ulamas have a greater reach into grassroot and civil society. Judging by the film, I don’t think the ulama perempuan were gunning for presidency in Indonesia but they were very concerned about social issues, community progress, education and health. They even visited a red-light district to befriend sex workers, not preach to them.

This humanistic approach to Muslim grassroots work, in accordance with Syaria law, should be encouraged in this country because we sorely need it. I will not deny that there is work already being done: PAS Muslimah are quite aggressive, and there are other Muslim women’s groups who do a lot of work on the ground, but we need more of this, especially in the heartlands of Malaysia.

And what was Yati’s take on this?

“I (would) hope the audience is willing to consider the different points of views and not just accept any unjust and discriminatory laws, rules and views just because they are issued by people who claim they are experts in Islam,” said Yati, in an interview.

“They may be experts in religious texts but they may not have knowledge on sociology, or on gender issues.

“I encourage young women especially to share their views and life experience either by writing, in their song lyrics or by doing films. Don't ever think that you don't matter or your life experience is not important. Women are an integral and equal part of society and women are in no way lesser than men.”

Yati’s new film has been welcomed by what many would say are conservative Muslims. “Dr Siti Mariah Mahmud (Pas Muslimah) also came and watched it at the Bar Council… tak ada kutuk pun. YB Saari Sungip and his wife tengok that docu and loved it!”

I do have questions though: does class and socioeconomic status have everything or little to do with dakwah work, that organisations such as ISMA per se and Yati promote? Also, what are their observations of the psyches in Malaysia/Indonesia — why is Indonesia doing so much better? Because of poverty and nationalism? Greater intellect?

These will be answered another time.

Recently, I attended an Anti Gerrymandering Workshop conducted by SekolahAktivisme, one of UndiMsia!’s initiatives. The workshop saw Ong Kian Ming and Datuk Saifuddin Abdullah speak on elections, and participating in an interactive game designed to educate participants on what gerrymandering is.

“One of the main challenges faced when creating the game was simplifying the concept of gerrymandering for participants who may have never been exposed to the issue before,” said Yuli Hoe of SekolahAktivisme. The positive feedback received after the launch (last October) reassured them that they were on the right track and the game was effective in explaining the concept of gerrymandering to participants.

So far their reach has been focussed on urban areas in the Klang Valley and Selangor.

“We are concerned that we wouldn’t be able to reach our target group (especially the rural and non-urban young people) due to our limited resources (as our movers are either working/ studying). Therefore, we organised the media event hoping that we will be able to reach more youths from other parts of Malaysia through social media and the Internet. Moreover, we have set up our Sekolah Aktivisme website to allow the public to get to know more about our campaign (from the comfort of their home through their laptops/ and smartphones).”

Here’s an example of gerrymandering that you may find interesting: 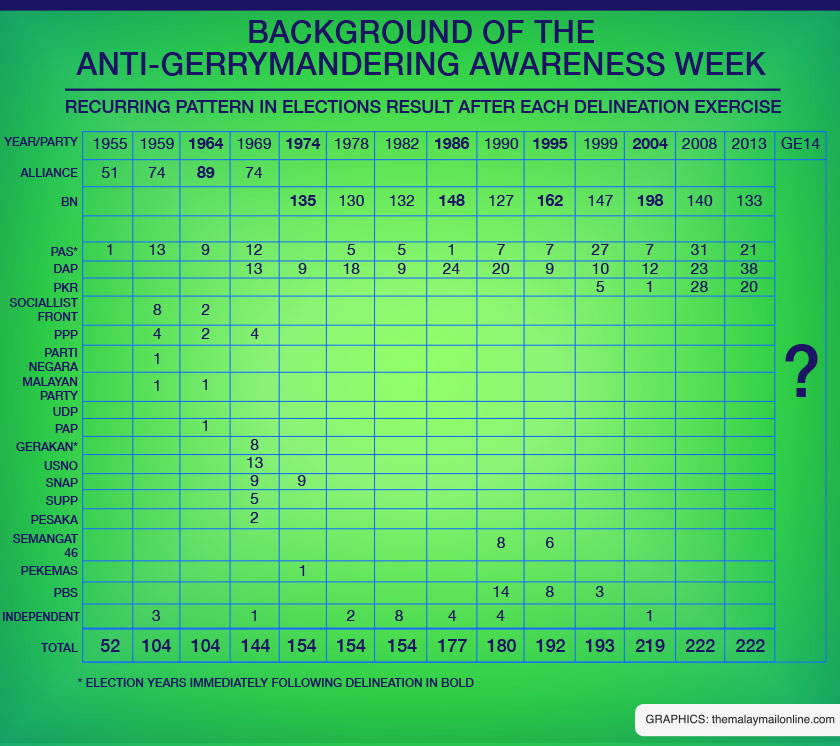 “Our team members Danie and Sheelaa have done extensive research for our Puchong Turun Padang project, and found a recurring pattern in election results from 1955 to 2013, whereby the ruling government would return to power with a bigger majority in the immediate election post-delineation.”

A YouTube video of the campaign can be found here:

It’s nearly mid-April and almost the end of the first quarter of the year. There is still hope, and there is always hope.