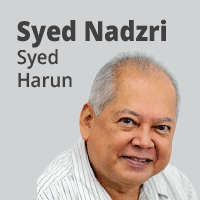 JULY 9 — After a jolly good innings on the most time-honoured and busiest part of Kuala Lumpur, the old charm, one of the very few restaurants of vintage Malaya left serving chicken chop with buttered toast, is finally branching out, hanging up its hat in Petaling Jaya two days ago.

Coliseum Café and Grillroom opened for business on the ground floor at Plaza 33, off Jalan Semangat in Section 13, which coincidentally is even less than a stone’s throw from The Malay Mail head office. In fact the spicy, tangy aroma of charbroiled meat is filling up my nostrils as I write this.

Well, that was a joke actually. But at least it was to stress that we are in the same neighbourhood — a restaurant that’s 92 years old and a newspaper which has a 117-year history (and, as they also say in cricket, not out yet). That however is where the old-is-gold similarities end.

Though many people welcome Coliseum’s expansion out of a crammed Batu Road (now Jalan Tuanku Abdul Rahman) where customers have to drive through a maze of traffic gridlock and fight for parking space with the Jalan Masjid India crowd, it is quite a surprise that the restaurant has chosen a trendy, modern shopping centre with a high-rise office block to locate its new arm.

We would have thought that the colonial-styled restaurant would find a more appropriately-alluring location such as somewhere near Tugu Negara, in Kenny Hills or next to Carcosa Sri Negara where Anglophiles really love to be associated with.

Yes, colonial grub has become Coliseum’s signature, from the distinctive chicken chops with green peas to sizzling steaks served with old-world cutlery by Hainanese cooks and waiters in their white thickly-starched outfit. The Hainanese mee, fried rice and the supremely delicious chicken pie came along over the years.

Many Malaysians got used to eating steaks “Mat Salleh style” with the advent of such restaurants which could be found in almost all major towns in the country in the old days.

With this kind of food served in these outlets came the adjusted Malay fare “bestek” that is simply derived from beef steak. The copycat cuisine soon became modified to go beyond beef while maintaining its root name to be hilariously called “bestek ayam, bestek daging, even bestek telur” now.

It is understood that the old Coliseum restaurant was such a big hit at one time that it became a regular station for many famous old-timers including former prime ministers Tunku Abdul Rahman and Tun Abdul Razak Hussein and ministers Tan Sri Khir Johari and Tun Tan Siew Sin, plus old celebrities such as Tan Sri P. Ramlee and Abdullah Chik.

Sadly if not for the Coliseum expansion, the Hainanese kitchens of old are vanishing. And with them the distinctive flavours found unmistakably in the old resthouses and colonial hotels and restaurants.

The old charm of the government resthouses especially is completely gone. I grew up first in Baling, Kedah where the British planters and police Special Branch officers would converge at the town’s resthouse for their “stengah”. It was an old resthouse, rather eerie in sight but that was the symbol of the now-lost institution.

Then as I grew a little older and went to school in Perak, I was exposed to the legendary tales about the resthouses in Kuala Kangsar and Taiping and how they were said to serve the best food.

Every once in a while we got lucky and managed to taste the chicken chop at the Kuala Kangsar resthouse located on a hilltop and I must say the experiences were unforgettable — especially when you were tucking into the dish on the verandah with a spectacular sight of the Perak River down below. Of course, the vanilla ice-cream would be the perfect dessert that followed.

If the resthouse was too classy, there was also the Double Lion Restaurant which served equally great Hainanese fare and the best buttered toast in Kuala Kangsar.

In Penang, the old charm used to be found in hotels such as Lone Pine, Springtide and those dotting the Tanjung Bungah area. But most of them are all gone.

The resthouses across the country have either ceased to exist or have been given a completely new look and operating under a new concept.

The Hainanese caretaker toasting bread on a charcoal stove and serving F&N “orange crush” in the bottle is history.

But that is life. Steaks now come in many forms, like the other day when I came across a promotional ad — Steaks “airflown from USA”: tenderloin only RM79.90.