JANUARY 15 — Today is the first day the government’s eTunai Rakyat initiative kicks into action and naturally there’s a lot to take in. All three of the participating eWallets have taken it upon themselves to try and win you over with various promotions and offers if you claim your RM30 with them. Among them, is Touch ‘n Go’s (TNG) RM30 + RM30 promotion where the idea is if you claim your RM30 with the TNG eWallet, you’ll get an RM30 “TNG eWallet Exclusive Bonus”.

Now, if you were to look at what it shows you on the eWallet app, it looks like you would be getting RM30 + RM30 for a total of RM60 if you claim it your eTunai Rakyat from them. However, we found out that the truth is actually a little different. If you head to the new page on the company’s website, you’ll find that the RM30 “TNG eWallet Exclusive Bonus” is actually RM30 cashback that’s returned to you over six transactions of RM5 each.

On top of that, the Promotion Details listed on the TNG Digital website states that users will only be able to get the cashback amount (RM5) with a minimum transaction of RM20 for the following services and features in the TNG eWallet:

FEATURES:
1. PAY
2. SCAN (where users can make payment over the counter at all retail merchants that accept TNG eWallet.

Each RM5 cashback will then be credited back to the respective TNG eWallet account after the transaction has been performed successfully. This means that this cashback will not be applicable for services and features like Transfer, PayDirect toll payments, RFID toll payments, or even PayDirect parking payments.

I am a little disappointed to find that the fact that this was a cashback–much less RM5 cashback over six separate payments of RM20 each–wasn’t immediately apparent in the app when you try to claim your eTunai. At first glance, I did not think that it was cashback because the text read “TNG eWallet Exclusive Bonus”. Would it have been so hard to say “TNG eWallet Exclusive Cashback” instead? Y’know, kind of like what was stated on their website’s graphic which they published later in the day?

[ UPDATE 15/1/2020 6:35PM ] Turns out the Touch ‘n Go eWallet has yet another condition. Not only you have to spend on 6 transactions of at least RM20, you’ll also need to make 3 transactions online or in-app, and another 3 transactions at retail outlets to enjoy your RM30 cashback fully. Do note that this promo is limited to the first 1 million users only.

Thanks Joshua for the tip! 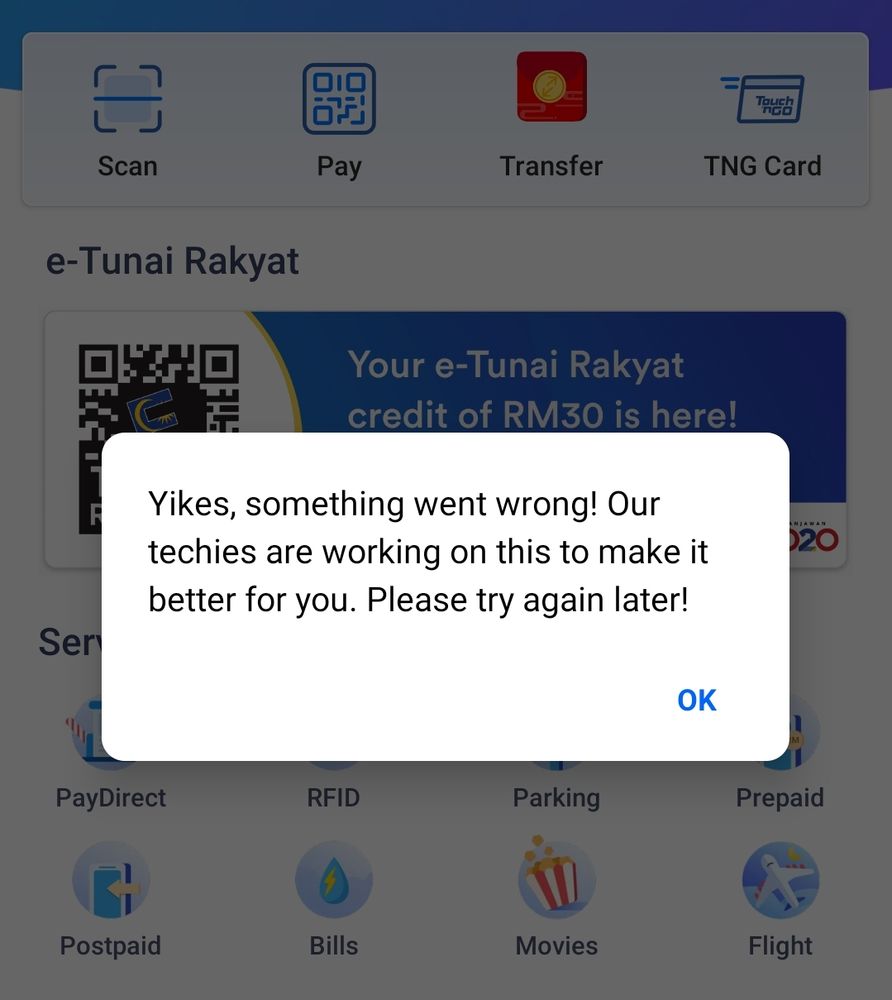 In any case, if your experience with TNG eWallet today has been anything like mine, this is the least of the app’s problem because after numerous separate attempts, I was unable to claim my RM30 from the TNG eWallet app. In fact, sometimes the app would just refuse to work properly, which was frustrating, to say the least.

Touch ’n Go eWallet is experiencing high traffic volume on our app due to the overwhelming response of e-Tunai Rakyat claims to-date. As of 12pm, January 15, 2020, our app has increased its capacity to process the increasing user traffic and seeing a higher success rate in the number of claimants. We truly appreciate your patience as our team is working effortlessly to assure that our app is back to its optimal efficiency phase in the quickest time possible. Being the most rewarding eWallet, Touch ’n Go eWallet is thankful for the faith Malaysians have given in choosing to redeem their e-Tunai Rakyat with us. We hope Malaysians will continue supporting us now and in the future as we bring value through the many rewarding campaigns planned for everyone on this cashless journey with us.

I eventually gave up and just claimed it with Grab because that’s my second most-used eWallet app but I’d love to hear how your eTunai Rakyat claims have panned out today. Drop us your thoughts in the comments below. — SoyaCincau

eTunai Rakyat: Get up to RM8,888 extra when you redeem your RM30