Rengit’s ‘pasar karat’, once a lure for second-hand bargains, rusting away leaving Orang Asli traders in the lurch

A general view of the Pasar Karat Rengit flea market where the local Orang Asli community trade second-hand goods March 4, 2022. — Pictures by Hari Anggara
Follow us on Instagram, subscribe to our Telegram channel and browser alerts for the latest news you need to know.
By KENNETH TEE

BATU PAHAT, March 9 ― Perhaps you are teaching someone to ride a bicycle and don’t fancy buying a brand new one that might soon get dented. Or have to care for a relative bedridden with a chronic illness and would like a fully functioning hospital bed at a cheaper price.

Bargain hunters in the know would head to this corner of Johor, just 35km from Batu Pahat and scour the Pasar Karat where they sell all kinds of second-hand goods at a steal, if you don’t mind putting some elbow grease in.

“That’s indeed a hospital bed, all the way from Singapore. It’ll go for RM900,” Asraf Gnan told Malay Mail when asked about the bed occupying almost half of his shop located about 1km outside Rengit town.

Asraf is a member of the Orang Asli community who were settled in the adjacent Kampung Bumiputera Dalam, and among the few who have ventured into business by way of the second-hand goods route.

“Still usable, I just need to use Clorox to clean it then it's good to go,” he said in a subtle sales pitch. 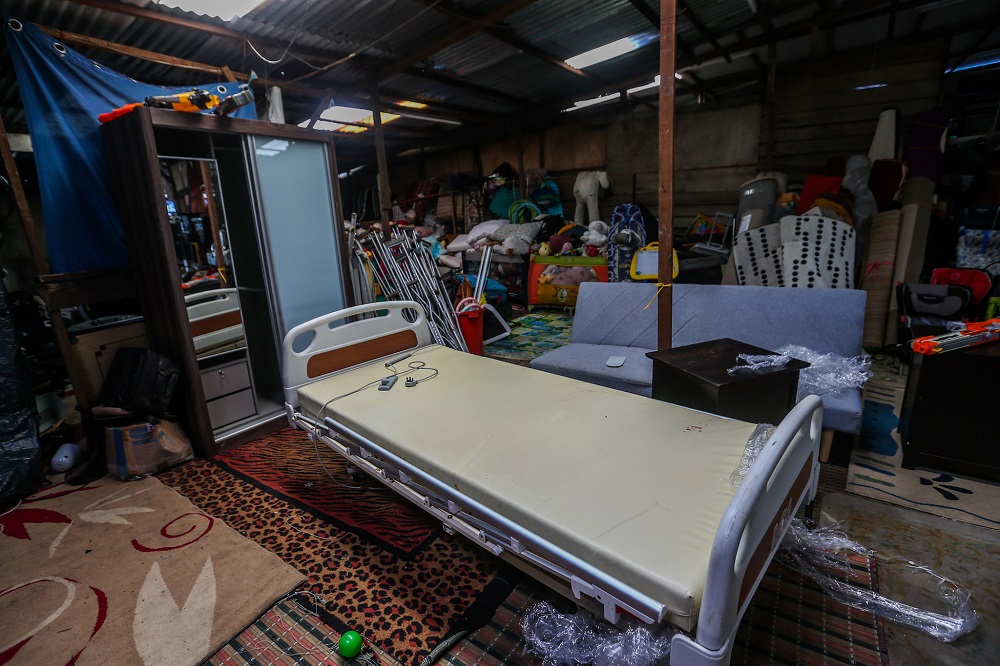 The 40-odd shops house an assortment of second-hand goods for sale at a bargain price.

The Rengit Pasar Karat, which literally translates to Rust Market, is a 500-metre long stretch of ramshackle structures cobbled together from wobbly-looking wood planks, tarpaulin and zinc sheets. It is effectively the commercial hub of the local Orang Asli community.

But like everyone else in the world touched by Covid-19, the market traders have been suffering over the past two years due to the border closures and restricted movement orders.

For one, Asraf said most of the traders here used to source their goods exclusively from Singapore. Since the Singapore dollar was the main currency used, deciding what they could afford to buy to resell later made a huge difference to their profit margin.

The traders would select items that were not too extensively damaged and only needed easy fixes to restore them to working order, albeit not in pristine condition.

The other reason is the decline in buyers. Asraf recalled how the two-laned road to the flea market would be congested with visitors on weekends, causing traffic to come to a standstill.

The 31-year-old said while their customers were mostly Malaysian, there were those who came from as far as Thailand. His family has been in the trade for 22 years.

“From the beginning of Covid-19 until now, it's terrible. Cases go up and people stop coming altogether.

“Even now some of us here have decided to reopen, but that requires capital and when you don’t have buyers, how are you going to raise capital?” Asraf remarked. 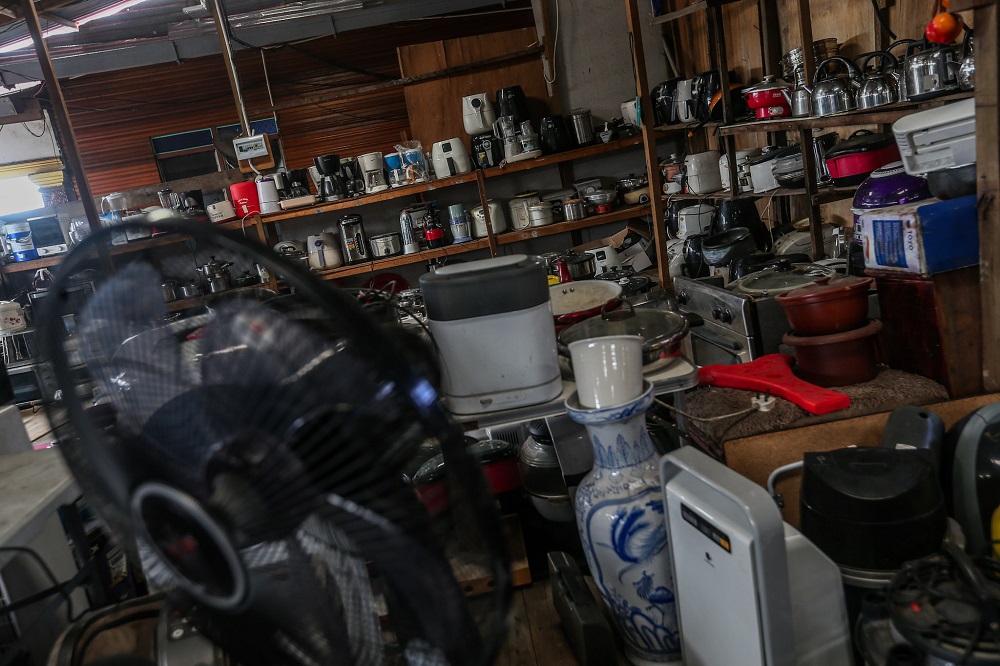 The traders would select items that were not too extensively damaged and only needed easy fixes to restore them to working order, albeit not in pristine condition.

There was none of the bustle Asraf described during Malay Mail’s visit last weekend. Most of the shops were closed.

The only people moving about were the handful of shopkeepers like Asraf who were keeping themselves occupied with arranging their merchandise for display. The only sounds apart from our voices were from the television display set that Asraf had switched on.

“Maybe people are hearing all sorts of stories about us and their manifested fear towards our community.

Another local trader Azizi Khamis said with how Covid had disrupted business, it would be a miracle for him to earn even RM1 these days. Previously, he could make an average profit of RM160 on a good day.

Azizi said he is working a second job now for income. He used to be a contract worker in Johor Baru but resigned when his mother’s health deteriorated.

He is keeping the shop open only because his mother handed it down to him.

“I have been working here for the past seven years. This business was my mother’s and she started it some 22 years ago when our community was still getting into the second-hand goods trade,” he said. 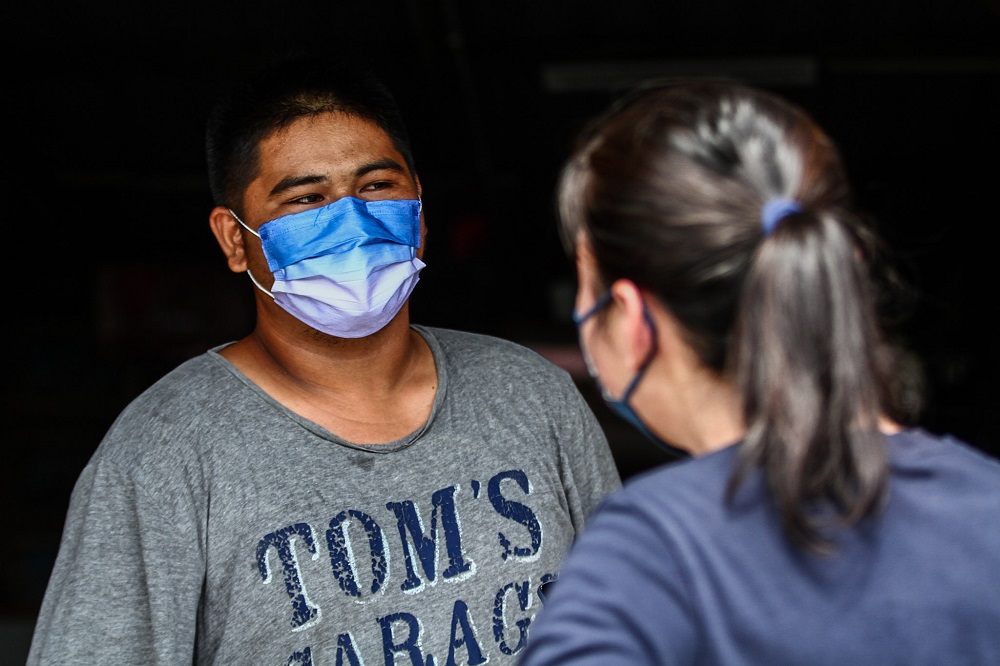 Azizi, whose house is located at the rear of the shop, believes that the decline in customers is because Malaysia’s Covid-19 infection rate is still in the tens of thousands and many people from out-of-town are afraid to venture far.

He said the Orang Asli community used to get some form of government support pre-pandemic.

“There was assistance in the form of basic necessities provided to us by the local representative during the early days of Covid-19, but that stopped soon after,” Azizi said in a resigned voice.

The previous representative was Ayub Jami from Umno. He was a four-term assemblyman for Rengit since 2004 and was also the Johor executive councillor for housing and local government under the administration of Datuk Hasni Mohammad from March 2020 to March 22.

Ayub is not contesting in the election this time. 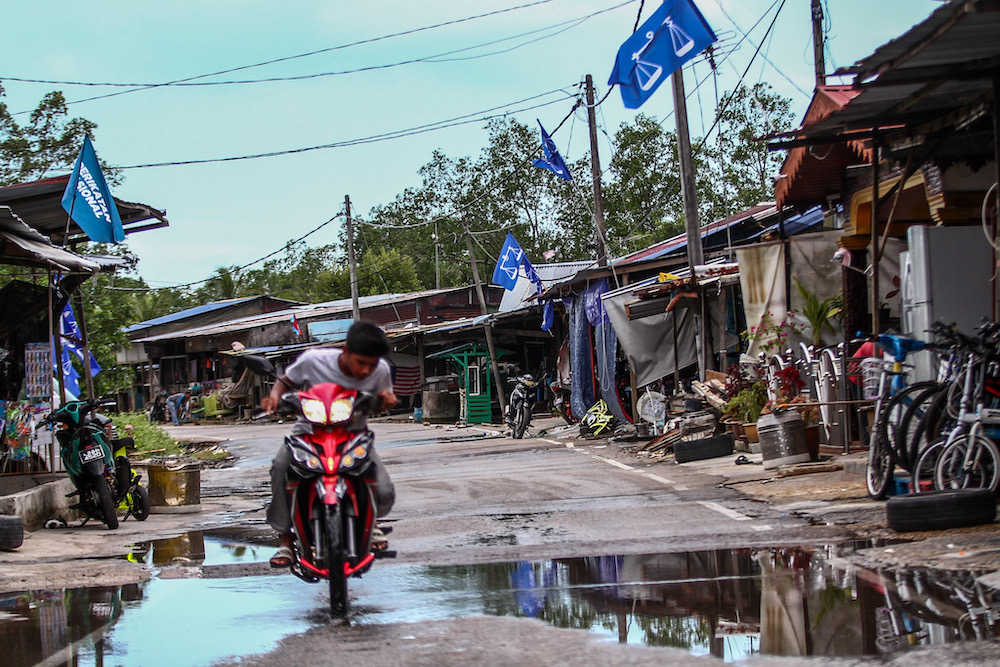