Nadma D-G: Many in Taman Sri Muda refused to evacuate when rain began, despite authorities stressing urgency of flood threat

Nadma director Datuk Aminuddin Hassim speaks to reporters in Taman Sri Muda, Section 25, Shah Alam December 20, 2021. — Picture by Hari Anggara
Follow us on Instagram, subscribe to our Telegram channel and browser alerts for the latest news you need to know.
By YISWAREE PALANSAMY

In a press conference at the Sri Muda flood rescue operations centre here, Aminuddin said that among the reasons given was fear of catching Covid-19 at the evacuation centres, as well as confidence that there would not be any floods.

“Just that, just for your information, when our personnel entered the area, there were those who did not want to leave.

“There were victims who refused to leave and I was informed by the Shah Alam City Council (MBSA) that when coordinating the team here, there were those who didn’t want to leave because they felt that this is just another flash flood and when it was too late, only then they asked to be rescued.

“That too, some whose homes were higher, wanted to stay put. They just asked for us to send them food supplies,” he said.

Aminuddin said that some drove to Taman Sri Muda from other states to check on relatives who were trapped in the neighbourhood.

He said rescue personnel noted down the contact numbers and checked on those whose details were given by their relatives, adding that there are 4,400 homes in the area.

Aminuddin added that despite attempts to coax them to leave, most refused and wanted to stay put at home, as they had supplies.

“And among their reasons was that they were afraid of Covid-19 at evacuation centres,” he added.

Aminuddin said that 41 boats belonging to the government were dispatched for the rescue mission, not including those brought in by NGOs and volunteers. 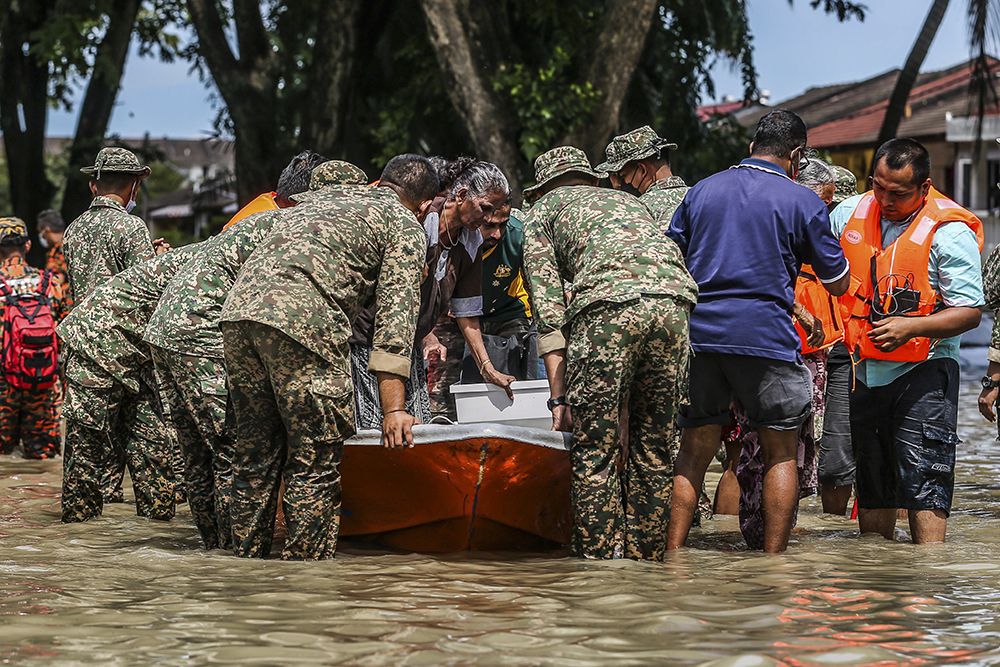 Director of the Fire and Rescue Operations Department, Datuk Nor Hisham Mohamad who was also at the press conference, said that rescue pleas started coming in at the “last minute”, after water levels rose unexpectedly.

“Secondly, the difficulty we faced was when the water level hit 1.5 metres. It went above the houses. So when we were informed (to rescue) this home and that home, it made it difficult for us to accurately identify the numbers.

“So we hope to have the residents at that time to respond or signal to us, for us to get closer to them,” he added.

Nor Hisham added that rescuers were also faced with an uphill task when their rescue boats hit submerged cars and capsized.

He also requested volunteers to register at the operation centre, so that the authorities can keep track of them for safety reasons, while they rescue those who are trapped.

The flood rescue mission at Taman Sri Muda appeared to have been ramped up this morning, as the rain had stopped, with many volunteers turning up to join hands with the authorities.

Social media was abuzz with criticism after flash floods hit the area, with many alleging slow response from authorities for rescue efforts.

Health Minister Khairy Jamaluddin said the 181 positive individuals were detected during screening by health authorities at the various flood relief centres, with the majority of them involving asymptomatic and mildly symptomatic patients under Categories 1 and 2.

Khairy also revealed that a total of 206 individuals have been identified as close contacts.

Expressing the ministry’s understanding of the current situation, Khairy said the priority was to rescue as many victims as possible, thus it was undeniable that certain measures were unable to be enforced properly due to the flooding.

He also provided the breakdown of the 181 cases, with the bulk of patients coming from Selangor at 117, followed by Pahang at 52, six in Kelantan, four in KL and one in Melaka and Negri Sembilan respectively.

Meanwhile, Selangor Mentri Besar Datuk Seri Amirudin Shari tweeted that as of 10am today, 32,044 individuals were placed in 162 evacuation centres in nine districts in Selangor, with Klang making up the largest number of evacuees, at 18,858 people.