What are the key differences between MCO 3.0 and (the revised) MCO 3.0?

A near deserted Kuala Lumpur is seen during amid MCO 3.0 on May 11, 2021. — Picture by Ahmad Zamzahuri
Follow us on Instagram, subscribe to our Telegram channel and browser alerts for the latest news you need to know.
By KENNETH TEE

KUALA LUMPUR, May 24 — In the fight to curb the spread of Covid-19, constant revisions are being made to the standard operating procedures (SOPs) of the ongoing movement control order (MCO).

Thus, it comes as no surprise that the newest and tighter restrictions on social movements and the economic sectors may differ from the previous iteration of MCO 3.0 which came into force on May 12.

However, this has also caused confusion among the people as they in turn struggle to keep up with the frequent, yet sometimes unclear revisions as occasionally announced by the government.

Malay Mail breaks down the key changes through a comparison of both versions of SOPs based on official documents released by the National Security Council (NSC).

Both land and sea public transport services (buses, LRT, MRT, ERL, monorail, ferries and other types of public transportation) will have to halve their capacity to that of the previous MCOs.

According to NSC’s SOPs, respective operating hours and ride frequencies will be subjected to the Transport Ministry’s guidelines but Senior Minister Datuk Seri Ismail Sabri Yaakob has confirmed that buses and trains will also see reduced frequency as well.

Businesses including eateries and roadside stalls will be allowed to operate only 12 hours a day, from 8am to 8pm (previous operating hours were fixed at 6am to 10pm across the board).

Other businesses which fall under the above categories include convenience stores, those selling daily necessities, pet shops, veterinary clinics, car wash operators, barber shops, optical shops and laundromats. Pharmacies, however, can open till 10pm.

Under the new SOP, petrol stations will operate two hours less from 6am to 8pm except those along the highways (previous operating hours were fixed at 6am to 10pm). 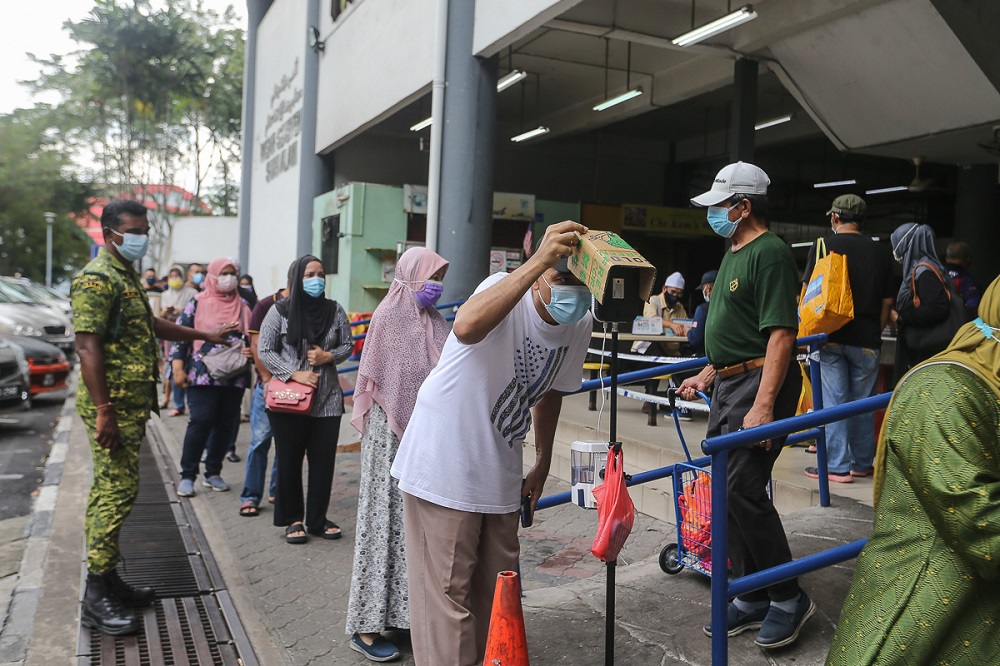 People have their temperature checked before entering the Seksyen 6 wet market in Shah Alam May 11, 2021. — Picture by Yusof Mat Isa

Morning and wet markets begin operations an hour earlier from 6am to 2pm (previous operation hours were fixed at 7am to 2pm). However this may be subjected to change under the authority of the local government.

Pasar malam or night markets to shorten operations by two hours from 4pm until 8pm (previous operating hours were fixed at 4pm to 10pm).

For malls and shopping complexes, exhibitions at lobby areas will be strictly prohibited. Operating hours have also been fixed at 8am to 8pm.

On top of that, the Domestic Trade and Consumer Affairs ministry has also included their own SOP in the form of restricting customers’ shopping time. Under this new SOP, customers are only allowed two hours max in retail outlets including shopping malls.

For the public sector, only 20 per cent of overall civil servants (not including frontliners) are required to be present at their workplace with the remaining 80 per cent to work from home based on allocations by the Public Service Department.

For the private sector, 60 per cent of overall employees including operations and management are required to be present in their workplaces with the remaining 40 per cent working from home at any given time.

According to Ismail Sabri, those working in offices will see their hours reduced as well.

With the public sector operating on reduced capacity, Chief Secretary Tan Sri Mohammad Zuki Ali has stated that respective civil servant workplace attendance is only limited to work requiring their presence at the office such as invoice payment or Cabinet meetings.

Over-the-counter services are only available if said services are not available online, with any form of exchanges conducted through an appointment-only basis. 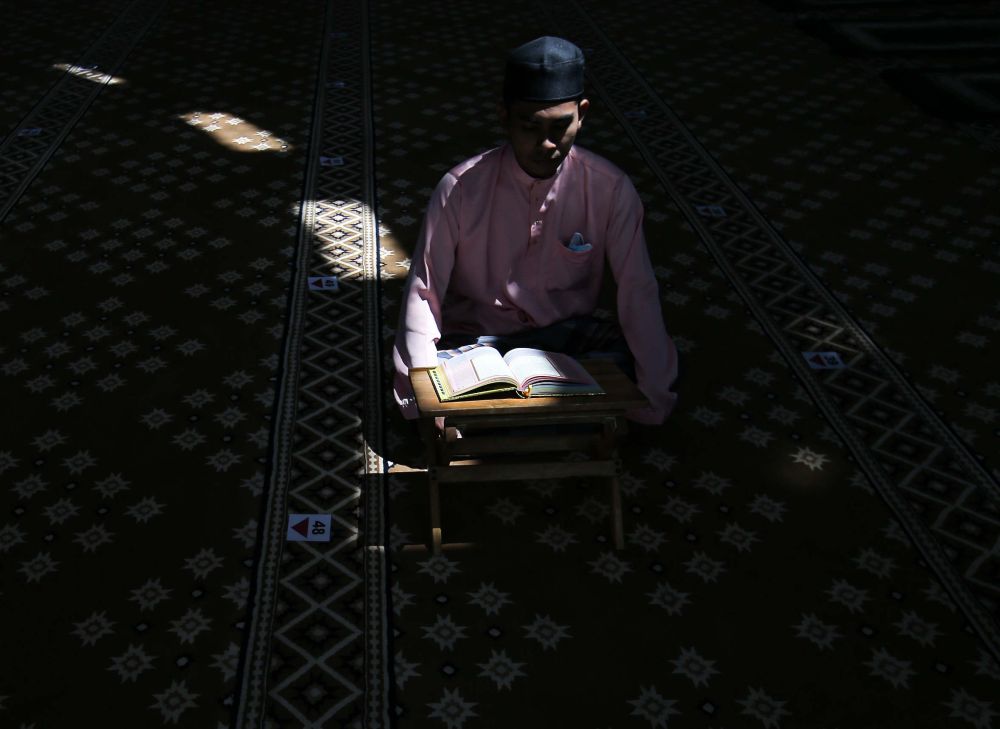 Friday and congregational prayers at mosques and suraus are now allowed under the latest iteration of the SOP. — Picture by Farhan Najib

Solat Jumaat and congregational prayers at mosques and suraus are now allowed with the number attending to be decided by the respective state religious authorities.

Picnicking and outdoor photography is not allowed. Wellness centres are also prohibited from operating.

Businesses can get further clarification on the new SOPs and operating hours by checking their respective ministry’s websites or visit the official NSC website.

The new restrictions will take effect next Tuesday (May 25) for the whole of peninsular Malaysia and Labuan. 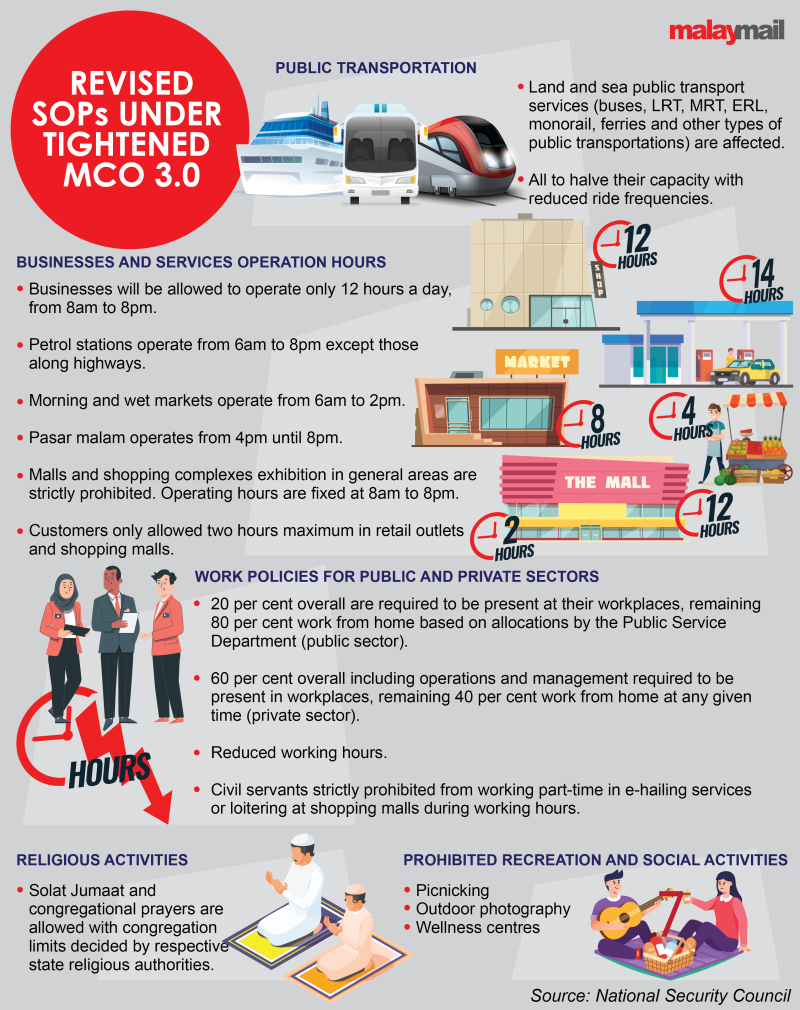