Trees in the Kuala Langat North forest reserve at Kampung Orang Asli Busut in Banting April 22, 2021. — Picture by Yusof Mat Isa
Follow us on Instagram, subscribe to our Telegram channel and browser alerts for the latest news you need to know.
By KEERTAN AYAMANY

The KLNFR — made up of reportedly 8,000-year-old forests — was gazetted as a permanent forest reserve (HSK) covering 7,246.96 hectares back in 1927. Today, only 957.6 hectares of the green lung is left, with 931.17 hectares of it endangered by the state government’s degazettement proposal.

While the Selangor state government has not made clear what it plans to develop in place of the forest, it maintains that the degazettement will work in the benefit of the state.

However, politicians such as Kuala Langat MP Datuk Dr Xavier Jayakumar, environmentalists, non-governmental organisations (NGOs) and the some 2,000 Orang Asli native to the area beg to differ. 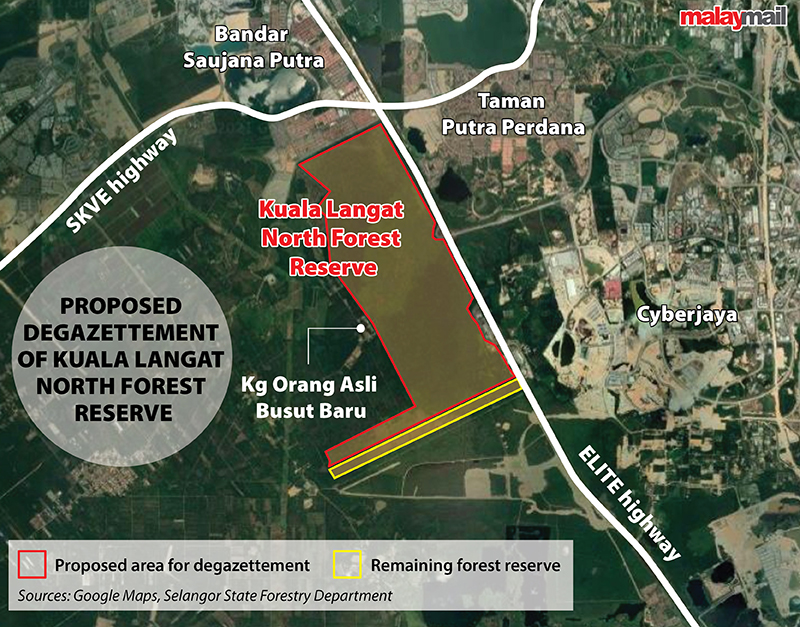 To explain the government’s reasons for the degazettement, in February last year, Selangor Mentri Besar Datuk Seri Amirudin Shari said that forest fires had “degraded” 40 per cent of the KLNFR, and the forest now poses as a fire hazard to nearby areas.

Amirudin — a PKR politician who came to power under the Pakatan Harapan government — also said that in accordance with Section 12 of the National Forestry Act 1984, the state government will be replacing the tracts of land earmarked for degazettement.

Compared to the 930.93 hectares the state government wants to degazette, the combined area of the “replacement” reserves will purportedly span approximately 1,177 hectares.

Amirudin also said that the Selangor State Development Corporation (PKNS) plans to build a business park — named Selangor Business Capital — in the vicinity, but failed to clarify if it would be located within the degazettement area or outside it.

The same day, on February 21, 2020, PKNS would issue a statement denying claims that the Selangor Business Capital will be built on reserve land and “violating the rights of the Orang Asli in that area”.

Amirudin had also mentioned that the East Coast Rail Link (ECRL) would be cutting through a small portion — some 2 per cent — of the proposed degazettement area.

However, the ECRL project’s plans have changed under the Perikatan Nasional (PN) government, and the train is now set to go through the northern parts of Selangor, passing by Gombak instead.

Is a history of fires good enough reason to abolish the 8,000-year-old forest?

The KLNFR — a forest mostly made up of peatland swamps — is reportedly home to several endangered species, including flora such as the meranti bunga and meranti bakau, along with fauna such as the Malayan sunbear, panther and clouded leopard.

However, in a recent report, JPNS director Datuk Ahmad Fadzil Abdul Majid confirmed Amirudin’s claims that 40 per cent of the forest has “degraded” due to encroachment and forest fires.

Ahmad Fadzil clarified that his use of the term “degraded” was referring to a reduction in diversity of the species of flora and fauna in the forest.

“It means in a one-hectare area, only five or six big trees and two or three species can be found. A normal forest would have hundreds of species (thriving) in an area of the same size,” he reportedly said.

Despite this, NGOs such as the Global Environment Centre (GEC) say the peat swamp forest still serves as a valuable “carbon sink” — naturally storing more than 1.5 million tonnes of carbon from the atmosphere — one of the last of its kind in southern Selangor.

GEC also said that after fires burnt a large area of the forest between 2011 and 2014, the Selangor state government had requested the local Orang Asli community to implement fire prevention measures and restore the forest, which it did with the support from the State Forest Department, NGOs and other parties.

Supposedly, following the initiative, more than 10,000 trees have been planted, recovering 300 hectares of the forest, with only one significant fire occurring since.

A danger to the Temuan people’s way of life

Beside the damage to the natural environment, one of the main groups affected by the proposed degazettement are the some 2,000 Orang Asli of the Temuan tribe, who reside in several different villages on the fringes of the forest reserve.

According to a report by local news organisation Bernama in April, the Temuan have lived in the forest area since 1886.

The latest villages are the result of the Temuan being uprooted in 1993, when they gave up their previous village — Kampung Busut Lama — to make way for the Kuala Lumpur International Airport in Sepang.

This event is also clouded in controversy, with a report back in 2009 claiming the Temuan were given only 404.6 hectares of the 607 hectares of replacement land promised to them.

Now fighting for the remainder of their ancestral grounds, members of the Temuan community claim they can still easily forage for forest products in the KLNFR despite the Selangor government saying parts of the forest have degraded.

The Temuan say they risk losing their livelihoods, along with their culture, handicraft and heritage as the raw materials used in items such as their traditional musical instruments and blowpipes are procured from the forest reserve.

Furthermore, the Temuan’s traditional burial grounds are located within the KLNFR and the state government has not announced any plans of how they are to manage those sites.

But who sets to profit from the degazettement?

In March last year, local news daily The Star reported that the Selangor government is expected to receive nearly RM324 million if the proposed degazettement goes through.

This will come in the form of land premiums, tax, and other payments made to the state by two companies who supposedly submitted proposals to develop the forest.

The other company, Menteri Besar Incorporated, which has Amirudin sitting on its board of directors and is a Selangor state government’s major investment vehicle.

The nature of these companies had caused opponents to the degazettement to say there is a conflict of interest in the issue.

Since then, calls for the Selangor state government to abandon its plans for the engagement of KLNFR have continued.

However despite sustained protest, as of April 12, the Selangor state government has said that the KLNFR degazettement proposal is still under discussion and it is examining the views of relevant experts such as professors from Universiti Putra Malaysia and Universiti Kebangsaan Malaysia.

February 5, 2020 — The Selangor State Forestry Department places notices of the Selangor state government’s proposal to degazette KLNFR in major newspaper dailies, and calls on stakeholders in the Kuala Langat district to voice objections to the proposal within 30 days.

February 20, 2020 — Selangor Mentri Besar Datuk Seri Amirudin Shari holds a media briefing defending the proposal, where he says 40 per cent of the forest has “degraded” due to forest fires, and gives his other reasons for the degazement.

February 21, 2020 — Several Facebook users complain that their posts protesting the degazettement were removed from the site. The users suspect foul play and that there is a concerted effort to track down and report their posts as spam.

March 18, 2020 — Federal government implements the movement control order (MCO) in response to the Covid-19 pandemic, putting a halt to all issues regarding the proposed KLNFR degazettement.

September 23, 2020 (according to NGOs) — Selangor State Forestry Department sends out invitations to select few NGOs, inviting them to attend a town hall session on September 29, 2020 in a resort at Pulau Carey.

September 26, 2020 — NGOs release statement asking the Selangor state government to reschedule the town hall session, claiming that it was too short of notice period to prepare for the meeting. The NGOs also oppose the meeting’s location in Pulau Carey, which is about an hour's drive away from KLNFR, and has limited transportation options making it difficult for the affected Orang Asli to attend.

September 29, 2020 — The town hall occurs at the planned date and venue at Pulau Carey. Before the event begins, several NGOs and Orang Asli are barred from entry at the gates but are later allowed in, reportedly on the instructions of Hee who chairs the town hall session. Various parties voice their objection to the degazettement and Hee promises communicate their objections

October 26, 2020 (according to NGOs) — The Pertahankan Hutan Simpan Kuala Langat Utara (PHSKLU) coalition consisting of nine NGOs, including Suara Rakyat Malaysia (Suaram), Parti Sosialis Malaysia, and Greenpeace Malaysia sends out a Letter of Undertaking asking for politicians to object the degazettement. Over the next two weeks multiple MPs and state assemblymen sign the letter, while the movement garners massive attention on social media.

April 12, 2021 — Despite sustained protest, Selangor state government says the degazettement proposal is still on the table and that it is seeking expert advice on the matter.