Minister: Govt may use Emergency powers to increase fines for Covid-19 breaches instead of just RM1,000, up jail terms

KUALA LUMPUR, Jan 21 — The federal government will be looking at imposing harsher penalties for breaches of rules related to Covid-19 including longer jail terms, and may increase fines from the current RM1,000 to a higher amount by using its powers under the Emergency, a minister said today.

Senior Minister Datuk Seri Ismail Sabri Yaakob said that one of the reasons for non-compliance of standard operating procedures relating to Covid-19 was due to the maximum compound of just RM1,000 under the Prevention and Control of Infectious Diseases Act 1988 (Act 342).

“So, many consider RM1,000 to be too low, maybe for businesses, that’s why offences of breaching SOPs — we always mention night clubs, night entertainment outlets, businesses that operate beyond operating hours, because for these companies, RM1,000 is too low,” he said today in a press conference.

He also noted as example that a company was issued a compound of only RM1,000 after its SOP breaches resulted in many of its factory workers being found to be Covid-19 positive and even resulted in the temporary closure of the factory, but said this had caused the public to be upset with the government.

“Many citizens were angry with us, because the fine is only RM1,000. But this cannot be avoided because the law already fixed it, Act 342 already provided RM1,000 only for fine,” he said.

While indicating that the government’s hands were tied due to the maximum compound of RM1,000 provided for breaching the Prevention and Control of Infectious Diseases Act, Ismail Sabri highlighted that the Emergency declared nationwide from January 11 to August 1 allows for the making of law through Ordinances for anything related to Covid-19.

“During this Emergency, we can amend and further increase the penalty, we can increase the compound imposed, so we have asked the attorney general to look into this.

“So insyaAllah, I believe the Attorney General’s Chambers (AGC) will look into this, if it is approved, we will enforce it immediately and the compounds can be issued on the spot. So I hope all citizens comply with SOPs without having to wait for action from the authorities,” he said.

Under the Emergency imposed on Malaysia currently, Parliament sittings have been suspended. The Federal Constitution allows for laws to be made by the Yang di-Pertuan Agong during the Emergency via Ordinances.

Later, when asked during the press conference on the expected timeline of when the increased fines would be introduced, Ismail Sabri did not specify one but said it was being looked into.

“So the AGC has already been given the responsibility to examine this law and I hope it can be resolved as soon as possible, so that we can announce and implement it immediately,” he said.

Having earlier said that big companies would not face problems paying the current RM1,000 fine for Covid-19 SOP breaches, Ismail Sabri also claimed that entertainment outlets, which are currently temporarily disallowed from operating in Malaysia under Covid-19 control measures, were still operating as they could also afford to pay the RM1,000 fine.

Ismail Sabri said he was informed by the authorities that such entertainment outlets even set aside RM1,000 to be paid when the compounds are issued for SOP breaches.

Again stressing that the Emergency would allow the government to make any Ordinances relating to Covid-19, he said the government would no longer be constrained by the existing legal limitations when seeking to enforce tighter controls to prevent the spread of Covid-19.

Ismail Sabri suggested that enhanced measures or heavier penalties could be possibly taken via Emergency Ordinances on matters such as employers that may refuse to send their employees for Covid-19 swab tests or employers who fail to provide proper facilities for their workers under the Workers’ Minimum Standards of Housing and Amenities. Act 1990.

“That’s why we see as a whole, what we could not do before the Emergency, we can do it during the Emergency for us to control Covid-19 better,” he said.

When asked during the same press conference, Ismail Sabri confirmed that it would be an offence for any employers who seek to conceal from authorities the fact that their employees had tested positive, and that the Health Ministry would be able to take action against such employers under the Prevention and Control of Infectious Diseases Act.

Ismail Sabri said it would similarly be an offence for any individual to hide their Covid-19 positive status from clinics or hospitals, or to hide the fact that they had close contact with Covid-19 cases instead of reporting this to health authorities.

Commenting on a viral video of police personnel issuing a compound on a shop worker for failing to wear gloves, Ismail Sabri today said he had confirmed with the National Security Council that there had never been any directives that made glove-wearing mandatory as part of SOPs against Covid-19.

He thanked the public for sharing the video as immediate action could be taken to prevent the enforcement of measures that were not actually introduced as SOPs, while also thanking the police for saying that directives would be issued to police stations nationwide to not take action against those who do not wear gloves. 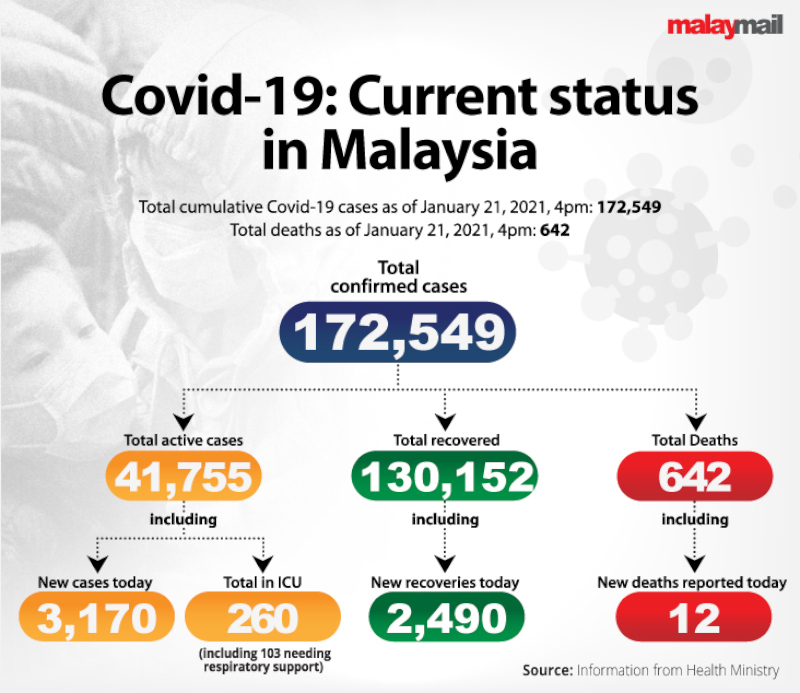