Datuk Seri Najib Razak arrives at the Kuala Lumpur High Court January 7, 2021. — Picture by Miera Zulyana
Follow us on Instagram, subscribe to our Telegram channel and browser alerts for the latest news you need to know.
By IDA LIM

As the prosecution had not asked for Najib to be cited for contempt of court but only for a warning to be issued, High Court judge Collin Lawrence Sequerah did just that, warning Najib not to repeat this.

“The court hereof thereby issues a stern warning on the accused to not repeat the actions. The court will take whatever actions deemed necessary to preserve the integrity of the trial process,” he said, referring to Najib as the accused.

In giving the brief grounds of his ruling on the matter of Najib’s Facebook postings on December 29, 2020 on Zeti, the judge noted that the Federal Court — in its April 2019 rejection of Najib’s bid for a gag order on the media and public in his separate trial involving SRC International Sdn Bhd’s RM42 million funds — had not decided that the sub judice rule is extinct.

“If a witness such as Tan Sri Zeti or potential witnesses crosses the line by making statements or drawing conclusions which are within the exclusive province of the court, it will offend the law of contempt of which sub judice is a species.

“The statements by Tan Sri Zeti do not justify the accused’s response by way of Facebook postings. The accused cannot make statements as if the trial is conducted in the public domain, no statement must be made in respect of the trial.

“What the accused stated, when viewed as a whole, amounts to attack on the prosecution witness,” the judge said, before proceeding to issue the stern warning on Najib.

On January 5, the prosecution asked the High Court to sternly warn Najib against attacking on social media witnesses who will be testifying in court against him in the 1MDB trial.

Datuk Seri Gopal Sri Ram, who was leading the prosecution in the 1MDB trial, had on January 5 said that Najib appears to be conducting his defence through Facebook postings, but said trials should take place in a court of law instead of on social media.

On December 29, Najib had in his Facebook post challenged Zeti to respond to allegations that her family had allegedly received funds of over RM100 million including purported funds originating from 1MDB from fugitive businessman Low Taek Jho or Jho Low in their bank accounts in Singapore.

On December 31, Zeti in a press statement said she and her family had never received any money from 1MDB, stressing that such allegations against them are completely false and malicious.

Besides highlighting that she had given her full cooperation to the authorities in their investigation of the 1MDB case, Zeti had also said she could not make any further statements as she was a potential witness in Najib’s ongoing criminal trial.

Earlier today, deputy public prosecutor Ahmad Akram Gharib highlighted that Zeti has been named as the 26th witness in the list of prosecution witnesses which had been made available to the court and to the accused as early as August 2019, arguing that Najib had used his Facebook postings to attack her credibility despite knowing that she is a prosecution witness in the 1MDB trial.

Akram said Najib as the accused should not conduct his defence in the 1MDB trial — especially by attacking witnesses for the prosecution — through social media, further arguing that Najib’s conduct undermines and interferes with the administration of justice and amounts to contempt of the court.

Akram said Najib’s launching of the Facebook attacks was aimed at challenging Zeti’s credibility: “He wants to demonstrate, even before Tan Sri Zeti has given evidence, that she is not a credible witness. He has done this by attacking her veracity and her reputation in the public domain. He has asked or called for the public to judge that she is not a witness of truth.” 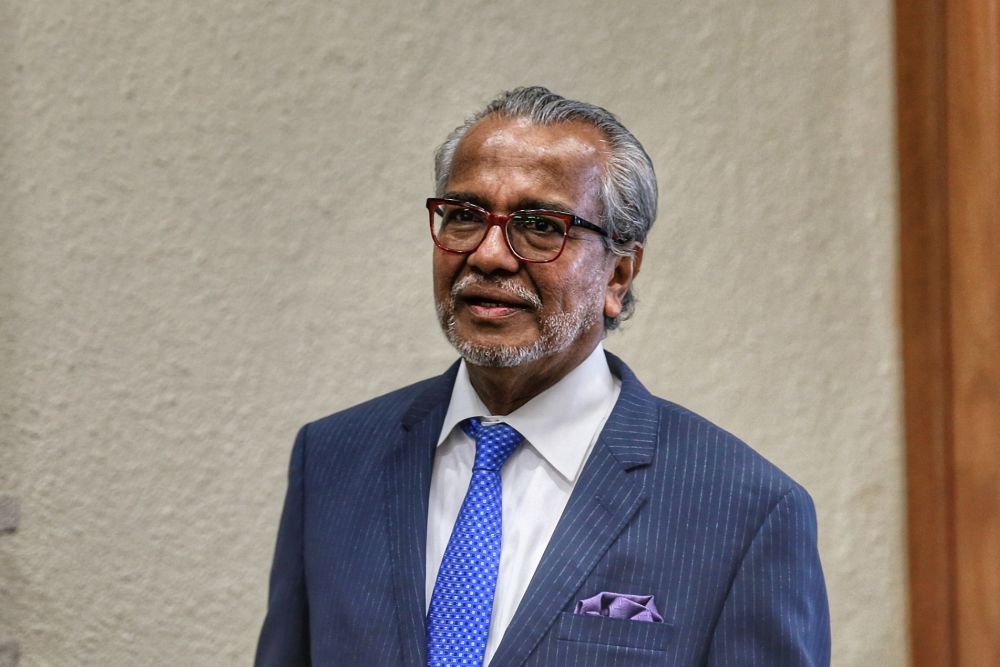 In response, Shafee claimed that it was incorrect to suggest that Najib had attacked Zeti without any reason, further alleging that it was Zeti who had allegedly “cast the first stone” against his client and that his client had to respond to those remarks.

In claiming Zeti’s purported attacks against Najib in relation to 1MDB, Shafee cited two articles containing Zeti’s remarks, as published on July 3, 2018 and September 16, 2019 by business news outlets The Edge and Euromoney respectively titled “Zeti: Najib asked me to say he did no wrong over RM2.6b remittance, but I refused” and “Malaysia turns again to the indispensable Zeti”.

Shafee argued that the September 2019 statement was made after Najib had been charged in court in relation to 1MDB matters and that it was prejudicial to his ongoing trial.

Shafee had cited UK cases when saying that the legal principle is that it would not be contempt to ask a witness to speak the truth or to refrain from giving false evidence, but also told the court that it would be an offence if improper or unlawful methods such as threats and bribery were used to achieve the objective of preventing witnesses giving false evidence. He indicated however that Najib did not use such improper methods.

“So, in light of that, can I suggest this case be taken no further, because this proceeding itself is a warning to everybody. Because they are better educated now with the submission of Akram and me. They are better educated, not only Datuk Seri Najib, but the whole lot of them at the back, we have learnt something new. There is no sub judice, no contempt. We leave it at that,” Shafee later said.

Akram then responded by suggesting that Shafee had in a way agreed that something wrong was done as he had indicated that everyone present in court has now learnt a lesson on what could or could not be done, but Najib and some of his lawyers were seen shaking their heads in seeming disagreement.

Akram argued that the July 3, 2018 statement by Zeti was merely made to defend herself against claims and attacks in an interview which Najib had made earlier against her.

He pointed out that this statement made by Zeti was before Najib had been charged in any courts in relation to 1MDB funds, and that she was not even listed as a witness for trials against Najib then and that there was nothing wrong for her to answer allegations against her in news reports.

He also argued that the September 16, 2019 article was as a whole Euromoney’s interview of Zeti on Malaysia’s economy, asserting that her statements there were not personal attacks against Najib, further suggesting that her remarks on 1MDB was merely her giving an example of the possible risks to the country’s economy in response to the media’s questions.

Akram said both articles containing Zeti’s statements do not amount to personal attacks on Najib.

“This is not a situation where the accused person is asking Zeti to speak the truth. He was actually conducting his defence by alleging that Tan Sri Zeti was aware of his criminal wrongdoings, he sought to engage her in public domain, knowing she was a witness in an ongoing trial, his intention was to portray Tan Sri Zeti as a liar even before she gave her evidence. This is a clear case of contempt, therefore we move this court to just give a warning. We are not looking for any contempt (order) or bail revocation,” he said.

The prosecution had previously said it was not seeking to have Najib’s bail revoked or to have him cited for contempt of court as it did not want the trial to be delayed, and had instead only asked the court to warn him to not launch attacks against those who will potentially be witnesses in his trial.

Shafee then said that Zeti should have in the past declined to comment to the media in relation to 1MDB due to ongoing trial on such matters, just as she had declined to provide further comments in her December 31 statement.

Shafee also questioned how Najib’s Facebook postings on Zeti could be seen as contempt of the court, arguing that Zeti had in her December 31 statement denied allegations regarding her family following Najib’s asking her to deny if the claims were untrue.

Following the arguments presented by Shafee and Akram, the judge then gave the ruling. Najib’s 1MDB trial has gone on for close to 60 days since it started in August 2019, with today initially set to be Shafee’s continued cross-examination of the 10th prosecution witness and former 1MDB CEO Mohd Hazem Abd Rahman.

Hazem was spotted in the Kuala Lumpur court complex today, but the trial did not go on after the judge’s issuance of a stern warning against Najib, as Shafee had to be admitted to a hospital in Kuala Lumpur this afternoon in preparation for a surgery to remove swelling in his right wrist and to carry out a biopsy.

Shafee had yesterday visited a specialist during lunch break in Najib’s 1MDB trial over his swollen wrist, with court proceedings today also starting later beyond 12.30pm due to his visit to another specialist for examination of the wrist.

Najib’s 1MDB trial will resume on the next scheduled date of February 8. Trial dates have been fixed for this case in February, and from April up until July 2021.

Najib will also have to attend trial hearings this month for an ongoing separate criminal case, where he is being tried jointly with former 1MDB CEO Arul Kanda Kandasamy over the alleged tampering of a federal audit report on 1MDB. This joint trial resumes on January 18 and will go on until January 21, with hearing dates already fixed in the months of February, March and April this year.