How Pakatan lost half its states, after prematurely ceding federal power in the 2020 political crisis

A Pakatan Harapan flag is seen along Jalan Sg Chua, in Balakong August 23, 2018. — Picture by Shafwan Zaidon
Follow us on Instagram, subscribe to our Telegram channel and browser alerts for the latest news you need to know.
By IDA LIM

KUALA LUMPUR, May 20 — The Pakatan Harapan (PH) coalition made an unimaginable sweep of state seats in the 14th general election (GE14) on May 9, 2018, and wielded control over eight out of 12 states up for grabs by the time the dust had settled.

With Sarawak’s state elections held separately from the rest of the nation, PH in the 2018 elections cruised to an easy victory over its main rival Barisan Nasional (BN) in the states of Selangor and Penang, and took over Negri Sembilan, Johor and Melaka, with the situation in Perak, Kedah and Sabah initially uncertain before coming under PH after some realignment of political camps.

But as of last weekend, PH has lost half of the state governments under its rule, which essentially feels like a wipeout of the unprecedented achievement by a federal Opposition coalition that had turned into the ruling coalition in the historic 2018 polls.

Here’s a recap by Malay Mail of how this came to be:

1. Prelude to the fall

On February 23 (Sunday), rumours of a new federal government under a new coalition involving the PKR deputy president at that time, Datuk Seri Azmin Ali, and PH component party Parti Pribumi Bersatu Malaysia (PPBM) as well as other parties such as PH foes, BN and PAS, went into overdrive.

The day was capped off with a meeting involving Azmin’s faction and new allies at the Sheraton Hotel in Petaling Jaya, the same location where PH had announced its victory less than two years ago. This event eventually became known as the “Sheraton Move“.

In a chain of subsequent events, the 2020 political crisis eventually saw the PH coalition losing federal power and becoming the federal Opposition, with a new prime minister from the new ruling pact sworn in on March 1 (Sunday). All in a matter of just one week.

Key to the collapse of the PH federal government was PPBM pulling out of the coalition, which caused it to lose the parliamentary majority required to stay in power. With PPBM out, PH was reduced to just PKR, DAP and Parti Amanah Negara, while Tun Dr Mahathir Mohamad who was prime minister had also quit and became an interim prime minister.

From then on, it became a game of numbers in the state governments where the PH coalition did not have a strong majority. One after another, state governments slipped out of PH’s hold when elected lawmakers started defecting and switching party loyalties amid the PPBM pullout that precipitated changes in the political landscape. 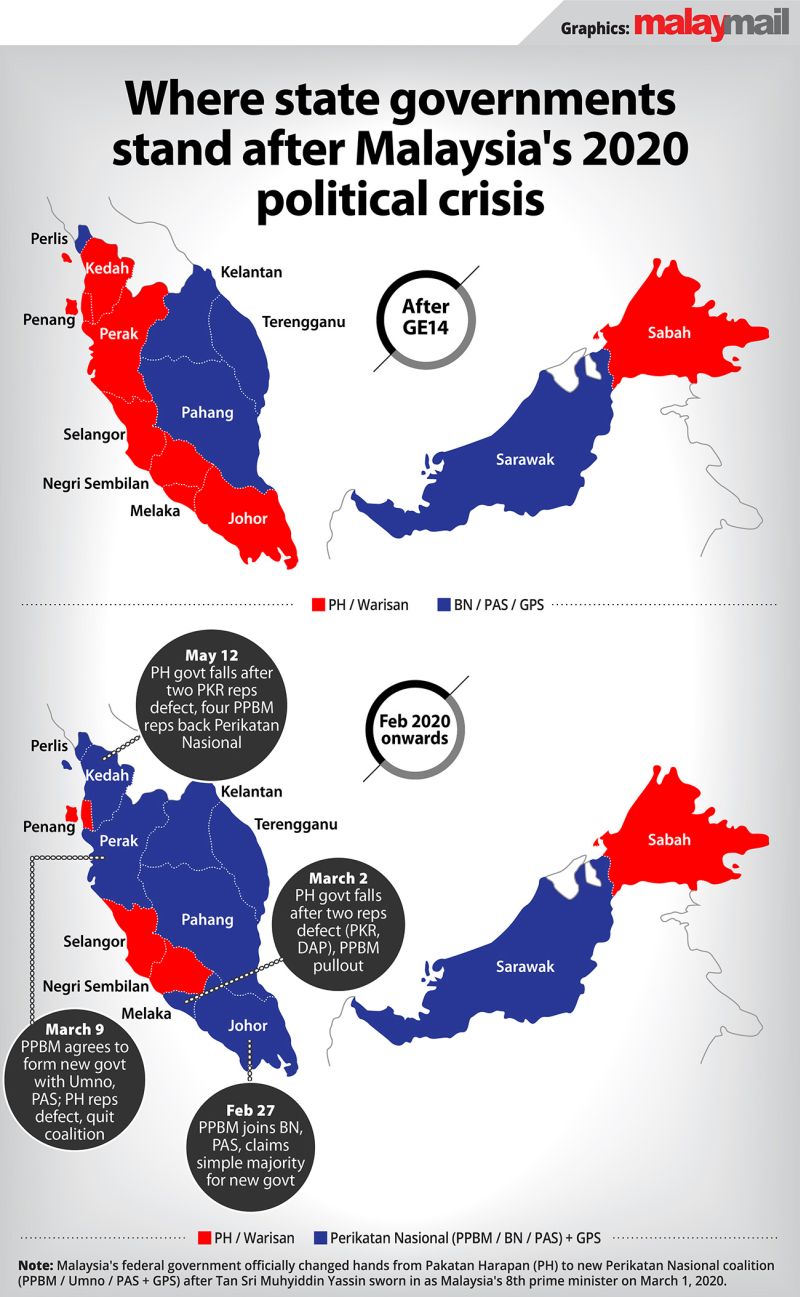 Amid the seven-day political crisis in February 2020, things moved quickly in Johor, even before a new prime minister for Malaysia had been selected.

PH no longer had the majority in Johor as it only had 28 seats left after PPBM pulled out, while a new coalition of PPBM together with BN and PAS would also have 28 seats. This resulted in a stalemate as at least 29 seats are required to form the state government.

After the Johor Sultan personally interviewed 54 state representatives (with two absent), it was announced on February 27 that there would be a change of government as the new coalition had a simple majority with 28 seats while 26 lawmakers had chosen PH. At that time, it was thought that an unidentified PH lawmaker had supported the new coalition.

PH insisted that same night it still had 28 lawmakers‘ backing including PKR’s Pemanis assemblyman Dr Chong Fat Full who was earlier thought to have supported the new coalition, but Johor Umno chief Datuk Hasni Mohammad was sworn in the next day on February 28 as the new Johor mentri besar.

On March 4, Dr Chong announced that he was quitting PKR to support Hasni’s coalition, which further cemented the position of the new PPBM-BN-PAS coalition as the new state government by giving it the majority by one seat over PH. Dr Chong was sworn in as one of 10 new Johor state exco, marking the first time an independent lawmaker has been appointed to the state government’s ranks.

What has changed: One PKR representative defected to support the new state government as an independent. MB no longer from PPBM, MB now from Umno.

Amanah’s Adly Zahari officially ceased to be Melaka chief minister under the PH government on March 2, following the Melaka governor’s rejection of his request for a dissolution of the state assembly for a fresh state election.

It had become clear by then that PH no longer held its razor-thin simple majority in Melaka, after the pullout of PPBM, which had two lawmakers, and the defections of PKR’s Rembia lawmaker Datuk Muhammad Jailani Khamis and DAP’s Pengkalan Batu representative Norhizam Hassan Baktee.

What has changed: PPBM pulled out of PH, one defection each from PKR and DAP. CM no longer from PH’s Amanah, CM now from Umno. 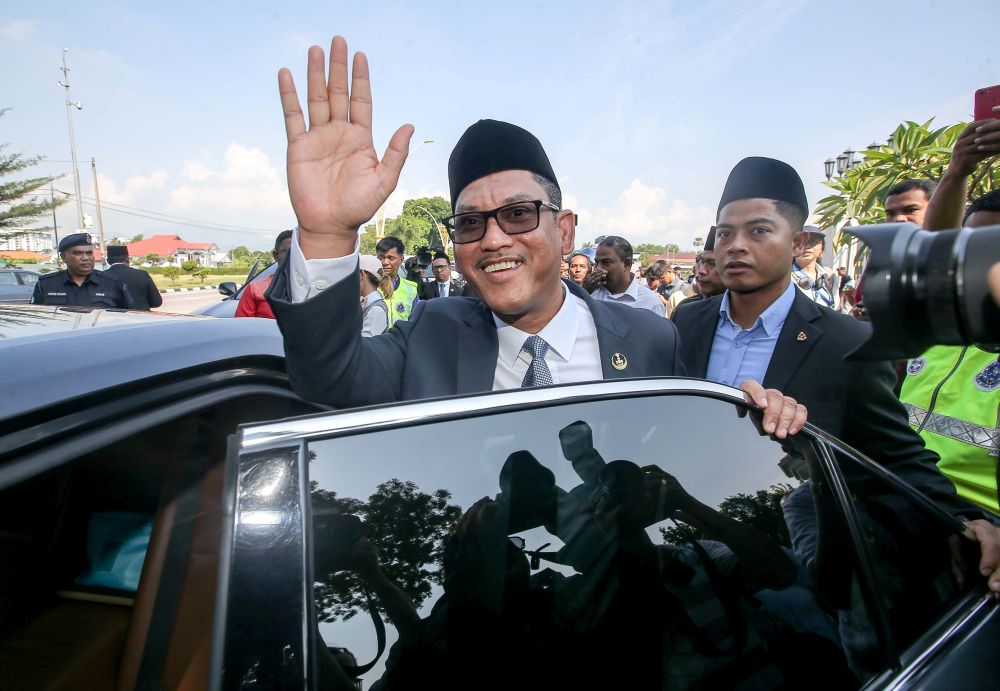 Faizal resigned as Perak MB on March 10 to make way for a new state government under a new mentri besar, and was sworn in again as mentri besar on March 13. Newly-minted PPBM members Nolee Ashilin and Abdul Yunus were part of the new excos sworn in on March 31.

Summary of the distribution of Perak’s 59 state seats:

What has changed (or not): Multiple defections and realigning of loyalty. MB still from PPBM under the new state government. 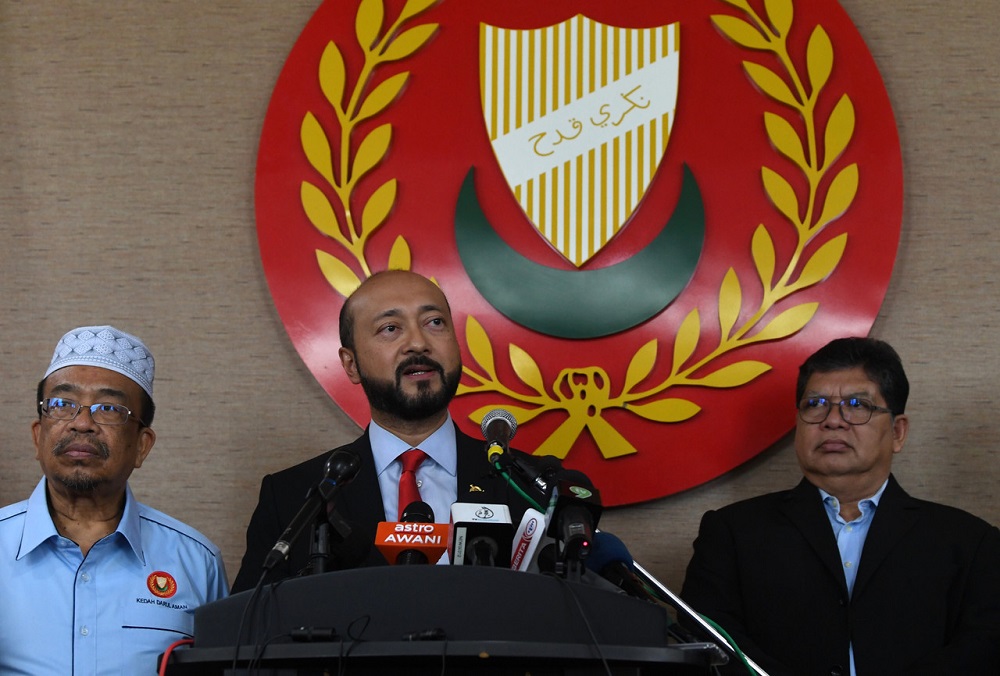 Unlike the collapse of the PH state government in the states of Johor, Melaka and Perak that all took place within days of each other in the aftermath of the February 2020 political crisis, the state administration in Kedah under PPBM’s deputy president Datuk Seri Mukhriz Mahathir as mentri besar stuck with the status quo for about two months.

Unlike the other states, PPBM’s pullout from the PH coalition at the federal level did not immediately result in the collapse of the Kedah state government, as all Kedah PH and PPBM state lawmakers in February decided to maintain status quo with Mukhriz continuing as mentri besar with 19 backing him.

But the PH coalition saw the Kedah state government wrested away from its grip just days after the two-year anniversary of the 2018 elections where it had emerged the winner.

Amid speculation of plans to oust Mukhriz who is in the PH-friendly faction within PPBM, two Kedah state lawmakers — Lunas assemblyman and state exco Azman Nasrudin, and Sidam assemblyman Robert Ling Kui Ee — had on May 12 quit PKR and defected to support PN. That gave the coalition 19 seats or enough to form a simple majority.

Mukhriz initially said the PH government still stands and that any change of government should be through motions of no confidence in the Kedah state assembly, but announced on May 17 his immediate resignation as Kedah mentri besar after he had notified the Kedah Sultan of his loss of majority support.

On the same day, Sanusi was sworn in as the new Kedah mentri besar.

Summary of the distribution of Kedah’s 36 state seats:

What has changed: MB no longer from PPBM, now from PAS. 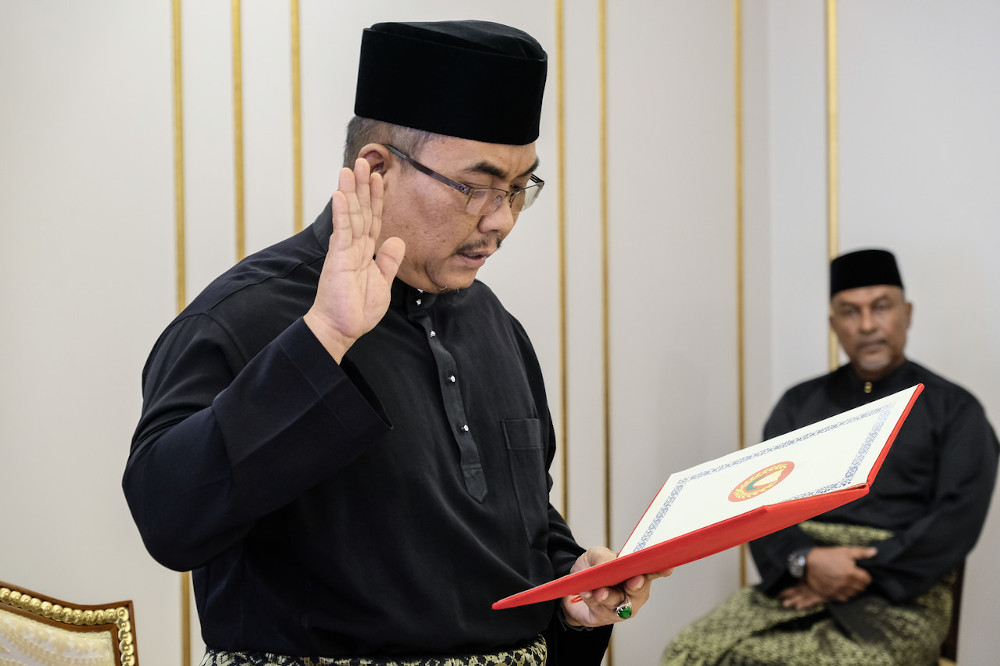 Sanusi was sworn in as the new Kedah mentri besar on May 17. — Foto Bernama

In short, the switching of political allegiances was instrumental after GE14 to resolve deadlocks and determine who would form the new state government, with the same tactic of defections also being used during and after the 2020 political crisis.

Civil society and reform groups have proposed anti-hopping laws or laws to prevent or impose penalties on elected representatives who decide to change political affiliations despite being voted in on a different platform, but lawyers have also noted the difficulty in enforcing such laws as it may end up punishing those who genuinely change parties due to their conscience instead of for personal gain.

What is Pakatan Harapan left with, two years after the historic GE14?

Now PH is left with Penang, Selangor, Negri Sembilan and Sabah via its partnership with key ally Parti Warisan Sabah.

For those who missed out on the drama of Malaysia’s 2020 political crisis, or simply want a recap of the action-packed week in late February 2020, here’s a timeline of the key events: