SERDANG, April 5 — As the battle to contain the Covid-19 outbreak in Malaysia intensifies, proactive and preemptive measures are being taken by the government to better manage the strain on the public healthcare system should an exponential spike in infections occur.

Just over three kilometres from the closest public hospital in Serdang, a 604-bed quarantine and treatment centre is just several screws and bolts away from opening its doors.

Built in a matter of days, the centre here was made to house and treat patients displaying mild symptoms or asymptomatic people who are Covid-19 positive, before hopefully recovering and being discharged.

Split into two huge halls at the Malaysia Agro Exposition Park Serdang (Maeps) with 400 and 204 beds each, the quarantine centre is expected to receive these low-risk patients from public hospitals in the Klang Valley, Negri Sembilan and Perak with final touches expected to be completed in the coming days.

Malay Mail along with other members of the media were invited for a tour of the quarantine centre, escorted and briefed by Senior Principal Assistant Director of the Health Ministry’s Healthcare Facilities Planning Section, Dr Siti Sarah Mohd Shukor.

Dr Siti Sarah, in her briefing to the press, first explained the chain of command that begins with a decision being made at the National Crisis Preparedness and Response Centre (CPRC) to determine which of the Covid-19 patients from the three states ends up at the Maeps quarantine centre.

“This happens in case one of the hospitals becomes congested, so the Covid-19 patients who are showing mild symptoms or are asymptomatic will be sent here to decongest the hospitals, allowing them to treat other patients and diseases,” she explained.

As we make our way towards Hall A — a mammoth 103,333-square-foot fully air-conditioned room with 400 beds — Dr Siti Sarah explained how patients would first be issued a check-in pass confirming their admission here before entering, some expected to be in the busloads.

She says once CPRC has decided on patients’ placements, information from the original hospital of admission would be relayed to the centre to aid in the continuation of medical treatment, especially if there are preexisting comorbidities.

Considering a majority of patients sent here would mostly be able-bodied and mobile, seamless contactless communication was a major aspect factored into the facility’s planning to better maintain manpower and resources while keeping direct contact at a minimum level, Dr Siti Sarah explained.

Once they walk through the facility’s entrance, patients will find themselves confined to a space classified as the red zone, where full personal protective equipment (PPE) must be worn by healthcare workers.

Just behind the red zone, separated by a wall of 10-foot-tall windowed partitions running lengthwise down the hall, is the control area where nurses and doctors are equipped with desktops and internet connectivity to allow instant information transfer.

The barriers and their transparent panels allow healthcare workers to monitor patients by sight and deliver audible instructions, either verbally or via a readily available PA system, while avoiding direct contact with those in the red zone.

Dr Siti Sarah added the facility’s embrace of technology and social distancing has also led to the development of a private WhatsApp channel that allows patients housed here to send text messages to the nurses.

“They will have a specific number to communicate with the staff, which the nurses can then relay to those within the red zone,” said Dr Siti Sarah.

Also situated along the partitions are intercoms and several strategically-placed panic buttons, including one in the bathroom, to alert nurses of an urgent situation.

Another touch deliberately added to aid caretaking, Dr Siti Sarah explains, was how some bed partitions were installed higher than others: The lower ones located closer to the control area are for more severe cases, while the higher ones surround those in a less dire condition.

“If you notice, the partitions are lower when they’re closer to the nurses’ control area. This is so that nurses can have a sight view of the patient and allow closer monitoring, as those placed here would be with more severe symptoms,” said Dr Siti Sarah.

It’s all not doom and gloom at the quarantine centre as Dr Siti Sarah then leads us towards the patients’ lounge where internet television, board games and reading material would be available, allowing some low-density recreational activities and helping to maintain some normalcy for patients.

Single seater sofas, oblong tables and the option of low participant count board games complete the lounge, with obvious efforts taken to implement adequate spacing as observed in the placement of furniture.

Also within the hall is a digital X-ray imaging room that will be fitted with LED walls and vests, allowing doctors an initial diagnosis of patients through a chest X-ray.

Drugs and medical equipment storage rooms, a laboratory for sample collection, general treatment rooms, changing areas, a pantry, bathrooms and waste management rooms and a pharmacy were all engineered into the hall to adhere to clinical requirements.

Dr Siti Sarah then explained the ministry’s requirement that a patient test negative twice over a period of more than 24 hours before being declared free of Covid-19 also led to the inclusion of a patient discharge area, specifically for those awaiting their results.

“Once in here, they will be isolated from the others together with other potentially recovered patients also awaiting their second test results.

“If they test negative, they will be taken from here, disinfected and asked to shower before being given clean clothes, with final checks before they are discharged,” Dr Siti Sarah said.

However, should the condition of a patient deteriorate, there are four resuscitation rooms within Hall A alone, each able to treat two patients at a time.

Facilities for doctors were also included, with donning and doffing rooms for them to apply and remove PPE, a control room with a centralised view of all the closed circuit television cameras, a lounge area and resting room, personal lockers, decontamination rooms and bathrooms.

When pressed as to when it would be ready to house patients, Health Minister Datuk Seri Dr Adham Baba was unclear, suggesting the centre was built as part of the government’s foresight into containing the outbreak

“The government is always looking ahead to anything that may happen, as we cannot be taking action and making preparations only when the number of cases increases.

“We take advanced action to make sure it is enough according to the estimates that we calculated as reasonable. So if this outbreak happens to become worse, we have the ability to handle it,” he said after his inspection of the centre yesterday afternoon alongside the media.

Two-hundred-and-seventeen new Covid-19 cases were recorded locally as of last evening, bringing the total number of infections to 3,333, with 827 already discharged and 53 deaths. 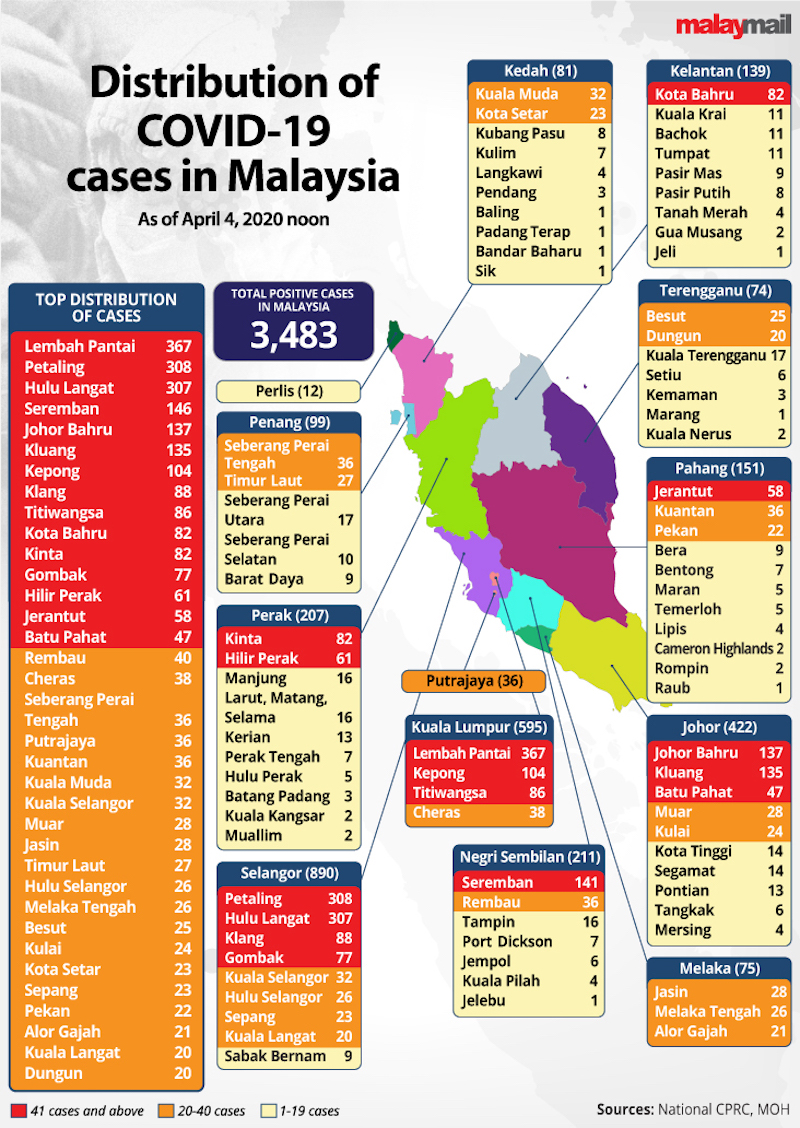 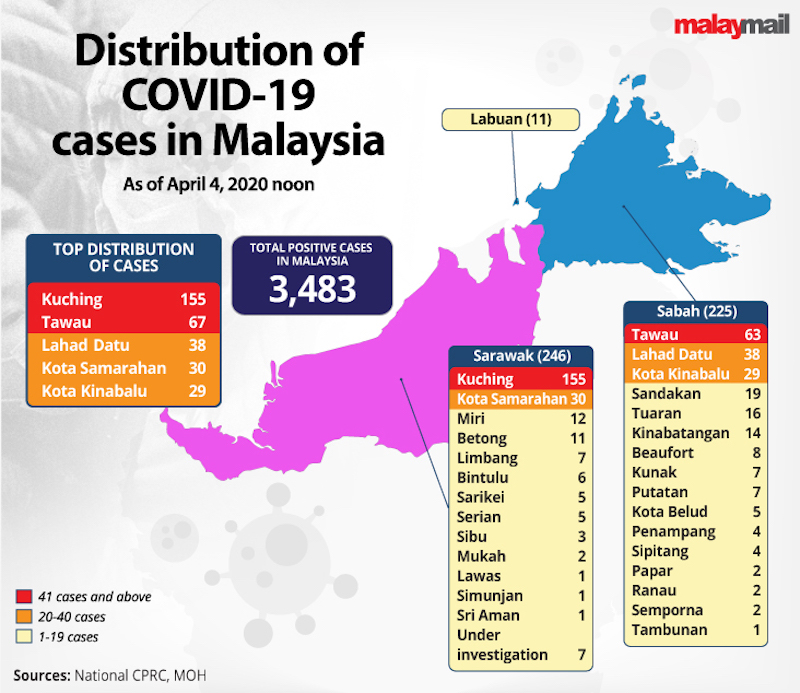