Noor Hisham said 10,553 of the 'tabligh' congregants that attended the gathering at Masjid Jamek Seri Petaling have been checked, with 513 testing positive. — Picture by Hari Anggara
Follow us on Instagram, subscribe to our Telegram channel and browser alerts for the latest news you need to know.
By IDA LIM

KUALA LUMPUR, March 19 — Malaysia has so far traced 10,650 of the attendees at a mass religious gathering held at the Jamek Sri Petaling mosque here from February 27 to March 1, with 513 of these testing positive for Covid-19 so far, Health Director-General Datuk Dr Noor Hisham Abdullah disclosed today.

Dr Noor Hisham urged other participants of the mass tabligh ijtimak gathering to step forward to undergo health checks by the Health Ministry, underlining the severity of the situation by pointing out that one participant died on March 17 due to the Covid-19 infection.

Attached to his Facebook post was a breakdown of the statistics on the 10,650 tabligh participants that the Malaysian government has managed to trace as of midnight today, including 659 who have been admitted and 6,627 who have been placed under home surveillance.

It was previously reported that an estimated 16,000 individuals participated at the mass religious gathering known as tabligh ijtimak at the Jamek Sri Petaling mosque in Kuala Lumpur, including 14,500 Malaysians and the rest from other countries.

A few days ago, one of the leaders of the tabligh event held in Kuala Lumpur — identifying himself as Mansur Ismail — had in a video urged participants to immediately get themselves screened for Covid-19.

Separately, Defence Minister Datuk Seri Ismail Sabri Yaakob today acknowledged concern over around 4,000 more tabligh participants at the Jamek Sri Petaling event that have yet to be traced, advising them to voluntarily step forward for health checks and Covid-19 screenings.

Total in Malaysia so far

Based on the latest figures announced yesterday by Health Minister Datuk Seri Dr Adham Baba, Malaysia currently has a total cumulative tally of 790 confirmed Covid-19 cases, including 60 who have fully recovered and been discharged as well as two deaths.

Also included in the tally of the 790 cases are the 513 tabligh participants.

In the health minister’s announcement yesterday on the status in Malaysia as of March 18 noon, he said 15 of the 730 Covid-19 patients still warded were undergoing treatment in the Intensive Care Unit (ICU) and require respiratory support.

This morning, Dr Noor Hisham in a separate Facebook post provided the updated status as of March 18, 5pm, with 17 Covid-19 patients now being treated in ICUs. 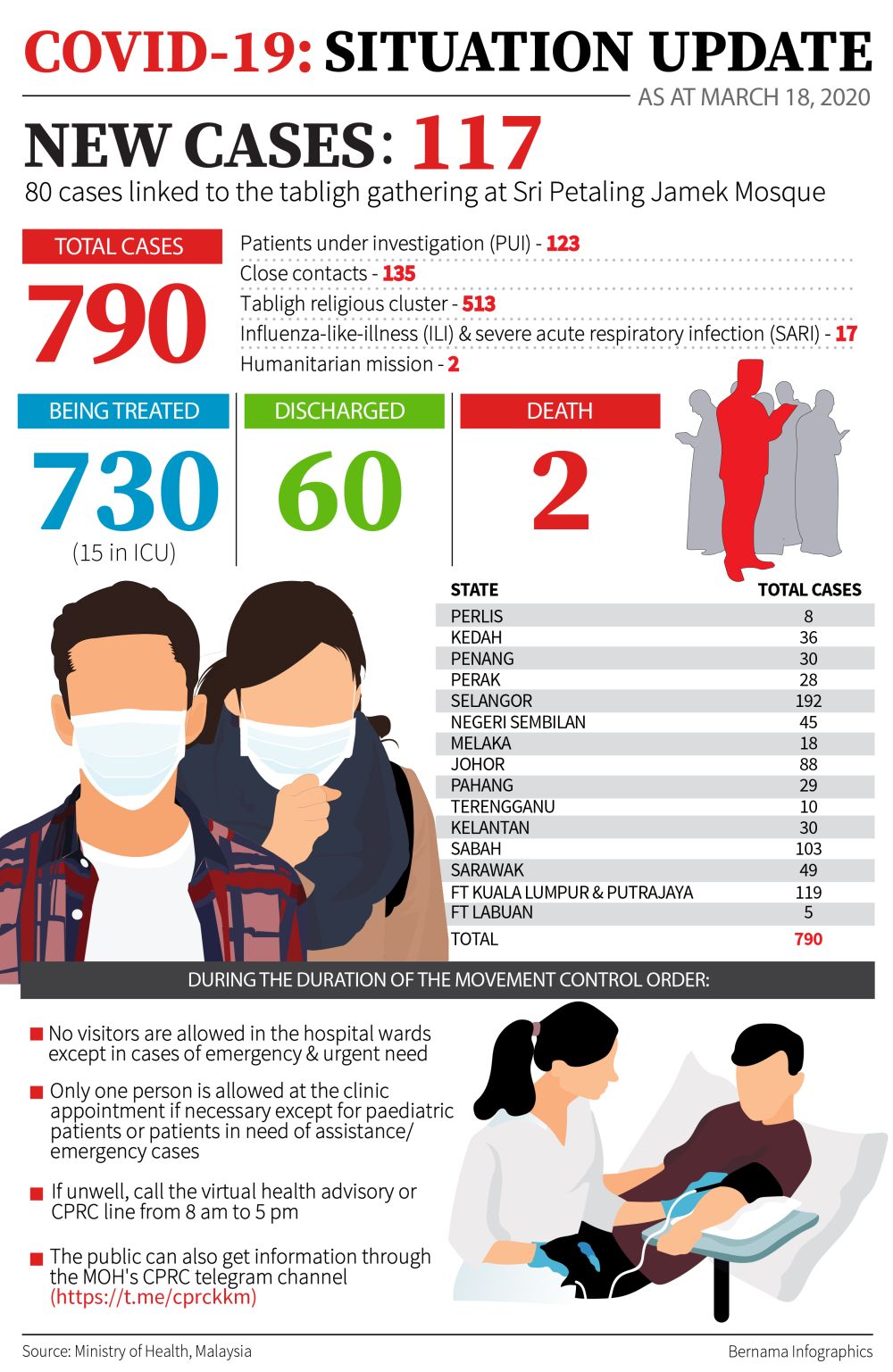