Wong, a practising lawyer, said the two platforms were used to put “government policy and government information in the right perspective”, as well as promote more “balanced views” about the Najib administration within the Chinese community.

“There has been so much information in Facebook, true news as well as fake news, so we thought it very important for Facebook users to get only correct information from the government. So we had the ‘Ah Jib Gor’ Facebook that puts correct information on government to users at large,” he said in the 1Malaysia Development Berhad (1MDB) trial on the second day of hearing.

Wong noted that the Chinese Malaysian community had a generally negative perception of the government and its policies prior to the 13th general election in 2013, and that it would be “timely” to address those views.

“The nature of the publication is to disseminate and distribute writings on government policies, political, economy, Chinese education, Chinese culture, including at times like GST,” he said of Chinese Weekly and the consumption tax Goods and Services Tax.

Wong said the publication was intended to  promote the view that not everything should be seen in a negative light and to highlight the “good things” done by Najib as prime minister, including helping the poor and aiding Chinese education.

Wong, who became Najib’s political secretary on December 1, 2011, said he was introduced to Lim by the then prime minister.

Wong said Najib had given him the RM246,000 cheque issued out to Lim’s bank account, and that Wong had then cashed in the cheque.

“If we were to issue personal cheque of prime minister, we don’t want that to be circulating on Facebook, so we would rather pay to someone whom we trusted so he could pay them for us,” he said in explaining the choice of Lim as a conduit for the funds.

Wong said Lim was asked to organise events or pass on information of Najib’s events as Lim had direct contact with the Chinese community at the grassroots level, noting the latter’s success in getting large numbers of people and certain target groups like senior citizens, to turn up.

“He did voluntarily, he didn’t claim anything,” he said, noting that Lim was seen as “trustworthy” to make the back-to-back payments to the two operators.

Wong agreed with the suggestion Najib could have used government funds for the running of the Facebook page and Chinese-language publication, but said Najib had never done so and had all the while used personal cheques.

Najib’s second trial concerns four counts of abusing his position for his own financial benefit totalling almost RM2.3 billion from the sovereign investment fund and the resulting 21 counts of money-laundering.

Among the 21 counts of money-laundering brought against Najib last September, he was accused of having used illegal funds allegedly originating from 1MDB by issuing cheques totalling RM22.649 million to five recipients.

The five cheque recipients stated in the charges against Najib included Lim, who is said to have received RM246,000 on August 7, 2013.

This is not the first time Wong has spoken of personal cheques from Najib given to Lim for such purposes.

In Najib’s first trial involving the alleged abuse of RM42 million belonging to a former 1MDB subsidiary, SRC International Sdn Bhd, Wong testified that RM238,194 was given to Lim to also be channelled for those operating the “Ah Jib Gor” Facebook page and Chinese Weekly.

Today, Wong also confirmed that Najib had signed a cheque dated January 21, 2012 for RM30,000 issued out to him, testifying that the sum was payment for fees to a political analyst which he then forwarded.

He explained that the Prime Minister’s Office which he was working had at times asked others to carry out political assessment and political analysis.

Wong also confirmed Najib’s signature on a third cheque dated May 23, 2012 for a sum of RM2,600, but could not recall what it was made out for.

Later when asked by lead prosecutor Datuk Seri Gopal Sri Ram, Wong confirmed that it was the “Prime Minister’s Office” namely himself and Najib  who did not want the latter’s personal cheques being circulated online.

Wong was one of Najib’s three political secretaries, with the latter two handling Islamic affairs and work such as those relating to Umno, Malays, economy and politics.

Wong said he handled political work including matters involving religions other than Islam and reaching out to the Chinese community.

Speaking at length about Najib’s contributions to Chinese education such as the elevation of several colleges to become university colleges and funding for schools, Wong agreed that he was a tolerant prime minister in racial and religious matters, saying: “That’s why I worked for him.”

Today, Batu Kawan Umno division chief Datuk Mohd Noor Ahmad confirmed that then prime minister and then Umno president Najib had signed off on a RM100,000 cheque on August 6, 2013 to the division.

Mohd Noor said he was acting division chief for Batu Kawan Umno from March 2013, and became its chief from October 19, 2013 until now.

He said the division usually receives RM10,000 per month from Umno headquarters for its work that included helping the needy, but said such funds were insufficient.

Mohd Noor said he informed Najib of the lack of funds during an August 6, 2013 meeting with the latter in the Prime Minister’s Office.

As for the RM100,000 cheque issued from an AmIslamic Bank account, Mohd Noor said the one who “wrote and signed was Datuk Seri Najib”, later confirming it was the first time a prime minister had given such contributions during his time with a position in Batu Kawan Umno.

Mohd Noor confirmed the cheque was cashed in by the Umno division, adding that the RM100,000 was used to aid poor university students, and contributed to schools and for the needy during the end-Ramadan period.

Mohd Noor confirmed that the government has not charged Batu Kawan Umno officials or sought to forfeit the RM100,000, but also said the division’s bank account has been frozen for about more than a year.

In the 1MDB trial, Batu Kawan Umno is alleged to have received one of the five cheques from Najib with funds allegedly originating from unlawful activities.

Wong and Mohd Noor were the fifth and sixth prosecution witness in the 1MDB trial being heard before High Court judge Collin Lawrence Sequerah. 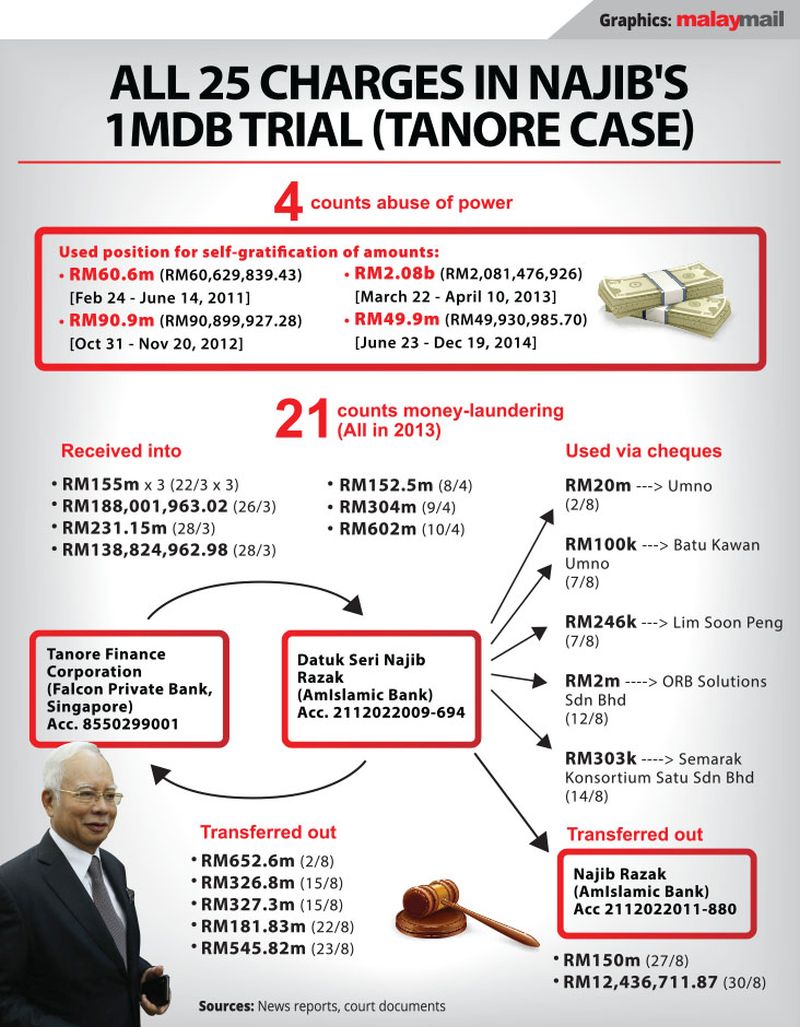