Heavy police presence is seen at the search area for missing Irish teen Nora Anne Quoirin in the jungle near Seremban August 13, 2019. — Pictures by Ahmad Zamzahuri
Follow us on Instagram, subscribe to our Telegram channel and browser alerts for the latest news you need to know.
By THASHA JAYAMANOGARAN

NILAI, Aug 13 — A body was discovered by a member of the public amid the search and rescue operation for missing Irish teenager Nora Anne Quoirin, police sources said today.

However, the body remains unidentified at the moment.

Quoirin’s parents were brought to the site of the discovery at 4.17pm.

According to the police sources, the body was found fully intact.

Negri Sembilan police chief Datuk Mohamad Mat Yusop has now confirmed the discovery, which he said was from a public report received at 1.57pm of a body in the jungle around The Dusun resort from which Nora Anne went missing.

“We arrived at 2.30pm and I can confirm we found a body... white skin colour; my forensics and pathology (teams) are now checking at the scene.

A heavy police presence is occupying the area, with personnel from the K-9 unit, sexual crimes division, and forensics team present.

The Lucie Blackman Trust has also confirmed the discovery, adding that it “seems likely” that the body belongs to the teenager.

“At this time we cannot confirm it is Nora. However it sadly seems likely. Investigations are underway to confirm identity and cause of death,” it said in a statement.

Yesterday, Nora's parents Sebastian and Meabh offered a reward of RM50,000 for any information leading to their daughter’s return.

Meabh Quoirin said: “Nora is so precious to us and our hearts are breaking. We are appealing to anyone who has information about Nora to help us find her.

“We have decided to offer a reward of RM50,000 which was by an anonymous Belfast-based business for any information that directly helps us to find Nora,” she said while holding back tears. 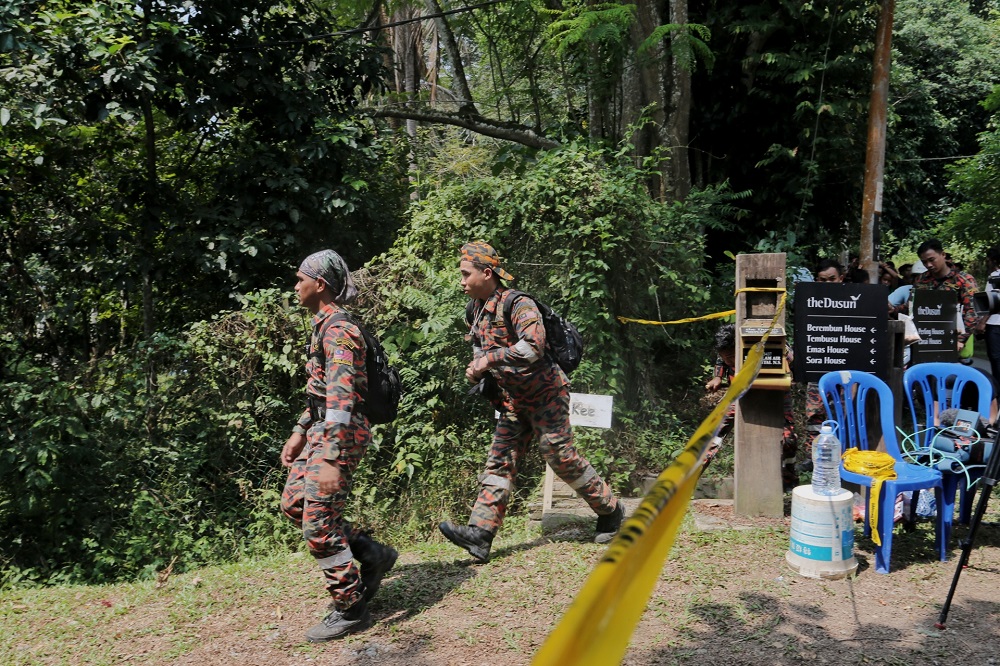 Members of the search team are seen entering an area cordoned by police after the discovery of a body in the jungle near Seremban August 13, 2019.

Police also disclosed yesterday that two police officers from the United Kingdom and another officer from Ireland had arrived to assist local authorities.

Nora flew to Kuala Lumpur from London with her father and two siblings on August 4 for a two-week holiday. Her mother arrived separately from Singapore.

The family journeyed together to the upscale forest resort from the airport that Saturday.

Nora was found missing from her bedroom which she shared with her siblings at 8am the following day.

* A previous version of this story contained and error which has since been corrected.