History made as Undi 18 Bill passed with bipartisan support

Minister of Youth and Sports Syed Saddiq Abdul Rahman pinned on a support for the Undi 18 Bill button on Ayer Hitam MP Datuk Seri Wee Ka Siong at Parliament on July 16, 2019. — Picture by Miera Zulyana
Follow us on Instagram, subscribe to our Telegram channel and browser alerts for the latest news you need to know.
By AZRIL ANNUAR

KUALA LUMPUR, July 16 — Putrajaya’s bid to amend the Federal Constitution to lower the voting age to 18 years old has met resounding success with unanimous backing from the Opposition bloc and government backbenchers who attended today’s sitting.

The Bill, which also includes automatic voter registration and allowing 18 year olds to contest in elections created history today for the Pakatan Harapan (PH) administration as it was the first successful constitutional amendment which received support from both sides of the political divide.

It saw the Bill, which was personally tabled by Prime Minister Tun Dr Mahathir Mohamad earlier, receiving 211 amount of votes, which is more than two-thirds majority of the 222-member Dewan Rakyat.

Speaker Datuk Mohd Ariff Md Yusof said that the Bill had passed both second and third reading without hiccups.

“The Bill has received 211 votes, zero nays and no one present has abstained,” Ariff said.

In his winding up speech, Dr Mahathir thanked all members of the Lower House who had taken part in debating the bill and made a final plea for all MPs to give their support to the bill.

“I once again call for all members of this sacred house to unite and support this amendment. Even though we come from different political beliefs, we can agree for the benefit, harmony and good of all Malaysians. Let us create history in Malaysia today.

“Therefore, I call for the full support of your honours to pass this bill,” said Dr Mahathir. During his winding up speech, the world’s oldest elected official acknowledged many of the issues raised during the debate, among them the concerns raised by Opposition chief Datuk Seri Ismail Sabri Yaakob (Bera — BN) on educating the students in political and democratic literacy.

“The Election Commission through the Election Academy (APR) had introduced Voter Education Programme since 2017 to educate the public, specifically the youths.

“The programme’s objective is to provide understanding towards Malaysia’s electoral process while answering issues raised during elections,” explained Dr Mahathir.

At the same time, he added that the EC has also introduced the APR Associate Trainer (AAT) programme to train more lecturers and coaches who can disseminate information regarding Malaysian elections.

APR has 150 voter education programmes for this year which will benefit 45,000 students in secondary schools and higher learning institutions.

Touching on compulsory voting as proposed by Datuk Seri Ahmad Maslan (Pontian — BN), Dr Mahathir said the government has no plans for it.

“For the time being, the government has no plans to making it compulsory for voters to cast their ballots during elections. Early study on countries that compel their citizens to vote have shown that they did not achieve 100 per cent voter turnout.

On cleaning up the electoral rolls where addresses might not be updated as raised by Datuk Seri Maximus Johnity Ongkili (Kota Marudu — PBS) and Chan Foong Hin (Kota Kinabalu — PH), the prime minister promised that the government will look into it.

He told the Lower House that the government will resolve the issue before fully implementing the automatic voter registration by the EC. 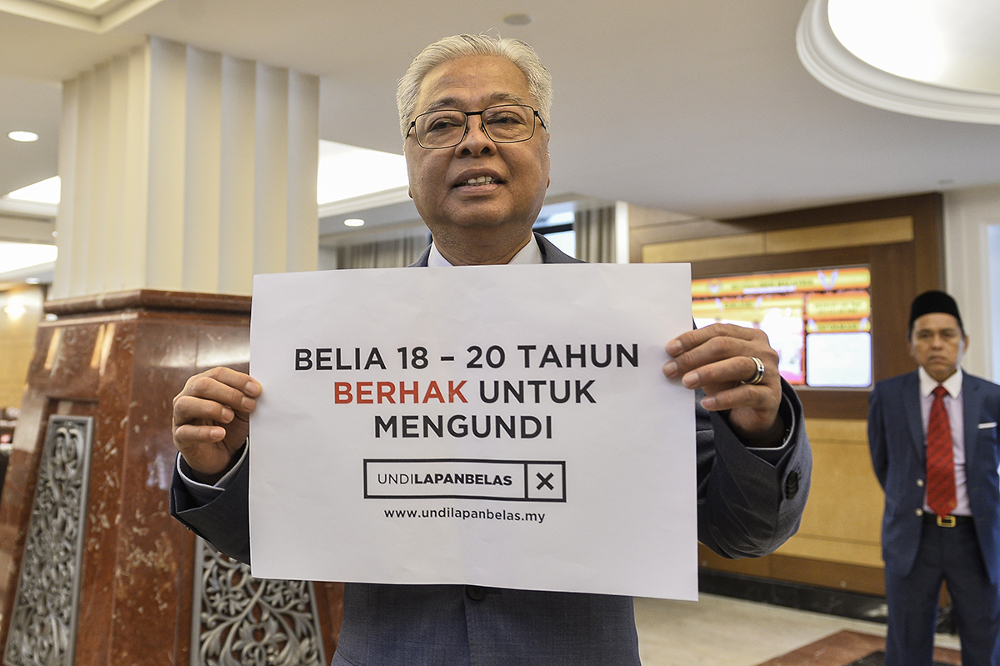