Datuk Tengku Maimun Tuan Mat is Malaysia’s first female chief justice. — Bernama pic
Follow us on Instagram, subscribe to our Telegram channel and browser alerts for the latest news you need to know.
By By Ida Lim and Boo Su-Lyn

KUALA LUMPUR, May 2 — The appointment of Datuk Tengku Maimun Tuan Mat today as the country’s first-ever female chief justice shows that one’s abilities should never be outweighed by their gender, the Malaysian Bar said today.

“It is a defining moment in nation’s history as this is the first time a female had been appointed to the highest office of one of the three arms of the government, the Judiciary, others being the legislative and the executive.

“This goes on to show that gender should never be a consideration over merits and one’s capabilities,” he said in a statement made available to Malay Mail.

Abdul Fareed said Tengku Maimun “is well known to be a fair-minded judge with good judicial temperament and sound knowledge of the law”.

“The Malaysian Bar has always had a good working relationship with her Ladyship from the days she was the chief registrar of the Federal Court.

“As an equal partner in the administration of justice, the Malaysian Bar is looking forward to a continued close and good working relationship with her Ladyship and the judiciary,” he said.

Tengku Maimun is currently aged 59. Judges have to retire at the age of 66 but may serve an additional six months if approved by the Yang di-Pertuan Agong.

“As her Ladyship will have quite a few years helming the judiciary, it will be an opportune moment for reforms to be carried out within the judiciary in order to take the Malaysian judiciary to greater heights and to erase all the negativities of the past.

“The Malaysian Bar is confident and hopeful that her Ladyship will rise to the occasion in taking all the necessary steps in making the judiciary one which the nation can be proud of, in dispensing justice in a fair and just manner,” Abdul Fareed said.

George Varughese, the immediate past president of the Malaysian Bar, also hailed Tengku Maimun for her performance as a judge.

“The appointment of Tengku Maimun Tuan Mat as the new chief justice is most welcomed and will certainly be accepted and appreciated by all quarters, especially by the members of the Bar.

“Her Ladyship is known for her sound decisions, impeccable judicial temperament and most of all her independence.

“Her Ladyship’s appointment augurs well especially for the reform of the judiciary,” he told Malay Mail.

Tengku Maimun started her judicial career as a judicial commissioner at the High Court in Kuala Lumpur on October 2, 2006.

She was appointed a High Court judge on September 5, 2007, and later became a Court of Appeal judge on January 8, 2013 before being further promoted to be a Federal Court judge on November 26, 2018. 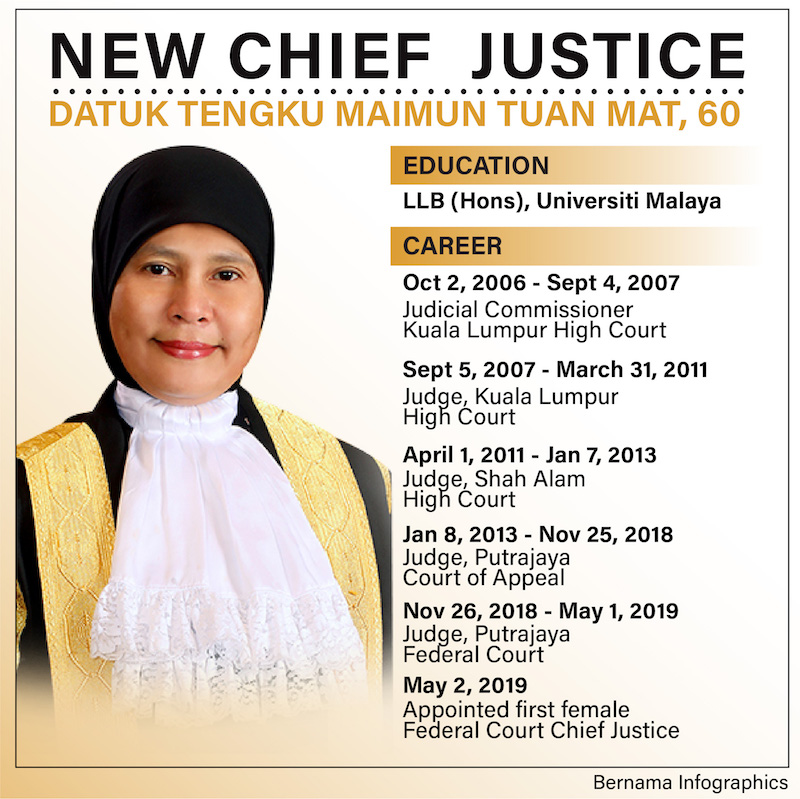