Fire and Rescue Department director-general Datuk Mohammad Hamdan Wahid attends the department’s Excellent Medal Award and Service Excellent Award ceremony in Ipoh March 13, 2019. — Picture by Farhan Najib
Follow us on Instagram, subscribe to our Telegram channel and browser alerts for the latest news you need to know.
By By John Bunyan

He pointed out that the authorities did not dispose of the chemicals after concluding that they were no longer reactive, allegedly due to the costs involved.

“This was not a good decision. By right, it should have been disposed earlier.

“Due to the current hot weather, the chemical emitted hazardous fumes again, which then spread via wind and made more people sick,” he told a press conference at the Perak Fire and Rescue Department headquarter in Meru here.

He added that his department could not have undertaken the task as this was beyond its purview.

Mohammad Hamdan explained that it would also have been a multi-agency effort led by the State Disaster Management Committee.

“I was made to understand that the cost of disposing of the chemical is high and so it was not cleared and left just like that,” he said.

The illegally dumped chemicals emitted toxic fumes in the vicinity of Sungai Kim Kim in Pasir Gudang, causing the closure of 16 schools.

It also resulted in over 500 people seeking medical attention as of today.

Energy, Technology, Science, Climate Change And Environment Minister Yeo Bee Yin earlier revealed that one of the three people arrested so far over the incident will be charged tomorrow. 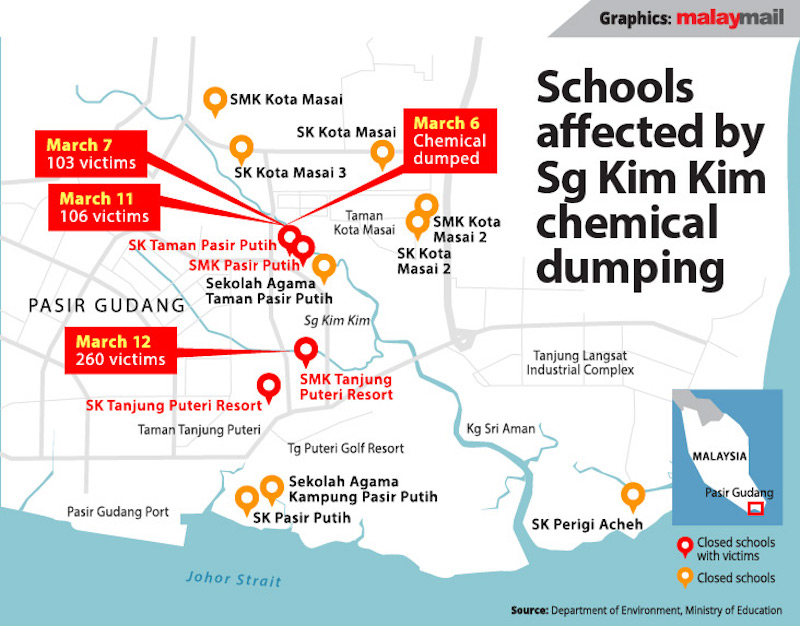