Putrajaya: Freedom of religion does not equal freedom from religion

KUALA LUMPUR, Nov 23 ― A deputy minister today claimed that atheism is a “very dangerous” ideology that goes against not only the Rukunegara that prescribes “belief in God” as one of the tenets, but also the Federal Constitution.

Deputy Minister in the Prime Minister’s Department Datuk Asyraf Wajdi Dusuki alleged that the freedom of religion in the Constitution which guarantees the freedom to worship does not include the freedom to not believe.

“We have to understand that in the Malaysian context, our Federal Constitution states that the freedom of religion does not mean freedom from any religion because that is unconstitutional.

The deputy minister in charge of Islamic affairs also said that any individual who practices and spreads atheism can be punished for going against the Constitution.

The senator said atheism can be punished under both Shariah and civil laws.

Meanwhile, Article 11(1) states that “Every person has the right to profess and practise his religion and propagate it”, subject to clause Article 11(4) that prohibits the propagation to Muslims.

Aysraf said a variety of laws including the Sedition Act can also be used against those who spread the ideology.

“For non-Muslims, as we are informed it goes against the laws relating to public order and peace.

“We also have the Sedition Act for any parties that try to spread ideologies and doctrines like atheism which disrupts the sanctity of other religions,” he said.

Asyraf’s remark was in reply to Parti Amanah Negara’s Kota Raja MP Dr Siti Mariah Mahmud who asked about the steps taken by Putrajaya to curb the spread of atheism among Malaysians, such as the Atheist Republic group that went under media spotlight in August this year.

Asyraf had earlier replied by saying that Putrajaya with the Malaysian Communications and Multimedia Commission had worked together to lodge reports to Facebook against atheists on the social media page.

However, their demands were ignored by Facebook who said the accounts did not contravene any of its rules and regulations. 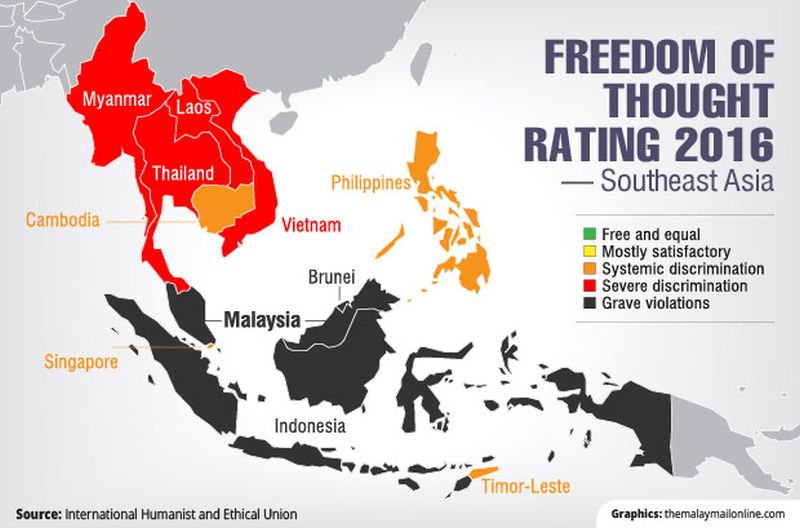 Last year, Malaysia was rated as “grave violators” of the rights and treatment of the non-religious in the Freedom of Thought Report by the International Humanist and Ethical Union.

The report highlighted that it is illegal to advocate secularism or church-state separation in Malaysia, or such advocacy is suppressed; while identifying as an atheist or non-religious is either illegal or unrecognised.