KUALA LUMPUR, Nov 23 ― Half of the 26 politicians from the Pakatan Harapan (PH) Opposition pact who recently declared their assets are millionaires on paper, while the rest were generally worth more than the average Malaysian.

The least moneyed politician on the list of mostly incumbent federal and state lawmakers from PKR, Parti Amanah Negara (Amanah) and PAS who publicly declared their assets to Invoke, a big data outfit run by PKR vice president Rafizi Ramli, was retired naval officer and Lumut MP Mohamad Imran Abdul Hamid, with a net worth of RM45,000.

The other 25 Opposition politicians have net worths (assets minus liabilities) ranging from RM124,000 to RM4.7 million. This is in contrast with the general Malaysian population where only about 10 per cent earn enough to pay income tax.

A total of 30,158 adults in Malaysia were high net worth individuals with their values between US$1 million (RM4.1 million) and US$5 million (RM20.6 million), according to the report.

PKR’s Ijok assemblyman Dr Idris Ahmad who has a gynaecology practice — the richest of the 26 who declared their assets to Invoke — was the only high net worth individual on the list with a net worth of RM4.7 million.

According to Dr Idris’ asset declaration, he has four properties (one of which was a bungalow purchased in 2006 for RM3 million), two land lots and three vehicles — a Volvo XC70, Honda CRV and Toyota Camry — all of which were above RM100,000 in current market value.

The second wealthiest politician on the list was medical officer and former Kedah executive councillor Dr Ismail Salleh from Amanah with a net worth of RM3.1 million. His asset declaration said he owned 90 per cent of shares in one company and 200,000 shares in another, with total current market value of RM1.5 million. He did not name the firms.

He has three properties, one land lot, and three vehicles. Dr Ismail’s asset declaration did not contain details on his income sources.

The third richest politician on Invoke’s list was PKR treasurer Tan Yee Kew with a net worth of RM2.7 million. She declared a bungalow worth RM4 million in current market value. Her income sources were also unavailable on her asset declaration.

Kelana Jaya MP Wong Chen from PKR (ranked fourth richest) was the only politician with more than RM1 million in cash savings, fixed deposits and his Employees Provident Fund (EPF) account, totaling RM1.4 million. His asset declaration said he had RM1.3 million in cash and fixed deposits, but did not list any property. Wong’s net worth was RM2.3 million.

The three politicians with the lowest net worth on the list were Mohamad Imran (RM45,000), Teja assemblyman Chang Lih Kang (RM124,000), and Simpang Pulai assemblyman Tan Kar Hing (RM178,319). All three were from PKR.

Mohamad Imran still owned a Honda CRV with a current market value of RM107,000. He was also the third-highest earning politician on the list.

The five lowest on the list, except for Mohamad Imran, were lawmakers in their 30s. The fifth 30-something politician, Semambu assemblyman Lee Chean Chung, was ninth with a net worth of RM609,542. 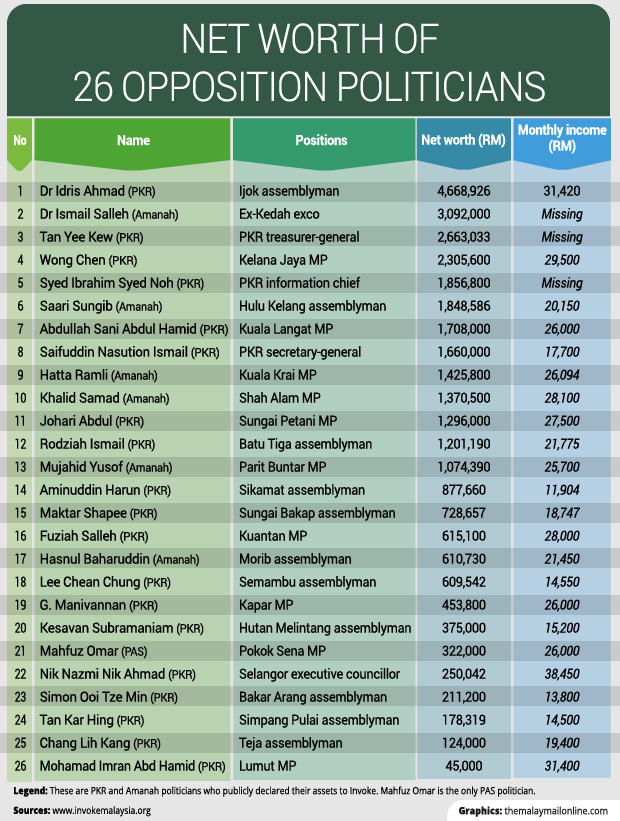 The other 20 politicians on the list were mostly in their 50s and 60s, an age group that typically has higher wealth. The top three wealthiest were aged 63 (Dr Idris), 54 (Dr Ismail) and 64 (Tan Yee Kew).

The average age of the 26 politicians was 52.

All 26 politicians on the list, except for Sikamat assemblyman Aminuddin Harun who owned a Proton Ixora, owned foreign-made cars. Eleven politicians owned cars with a current market value of RM100,000 and above, including one who owned a RM250,000 MPV.

Five-figure incomes for all

According to global salary database PayScale, a CEO in Malaysia earns an average of RM29,431 a month.

Dr Idris was the second highest-earning politician at RM31,420 monthly, out of which RM20,000 came from his clinic.

Former First Admiral Mohamad Imran was third on the list in terms of monthly income, coming in at RM31,400 (RM26,000 in salary and allowance as MP and an RM5,400 pension).

Selangor assemblymen earn a monthly salary of RM11,250. Housing and travel allowances total RM4,200, according to Saari’s asset declaration. Assemblymen from other states also earn upwards of RM11,000 monthly. The earnings are roughly equivalent to what a senior manager makes in Malaysia, which is RM12,500 monthly according to job review website Glassdoor.

MPs receive a monthly salary and allowances of RM26,000, more than what a chief operating officer (COO) earns in Malaysia at RM21,390 monthly, according to PayScale.

The mean monthly household income for Malaysians, on the other hand, was far lower than lawmakers’ at RM6,958 in 2016, while the median was RM5,228 that year, according to chief statistician of Malaysia Mohd Uzir Mahidin as quoted in The Star.

Opposition MPs and assemblymen under the Barisan Nasional (BN) federal and state governments, however, generally must spend their own money to run service centres.

For government assemblymen in Selangor under a PKR-DAP-PAS administration, the state provides RM16,000 monthly to operate service centres, according to Saari’s asset declaration. BN assemblymen rejected in 2014 the state’s offer of a RM200,000 annual allocation.

The asset declarations of Penang Chief Minister Lim Guan Eng and his executive councillors, dated 2008, 2011, 2012 and 2013, are available on the state government's website, but the forms do not contain details on how much exactly they earn.

Wealth is not necessarily indicative of impropriety, as the politicians could have outside employment or had previous jobs before running for office. Politicians have expressed this concern when discussing the reluctance on mandatory asset declarations.

Thirty politicians were supposed to have declared their assets to Invoke, but this article is based on 26 of them as Amanah vice president Salahuddin Ayub, Amanah president Mohamad Sabu, Amanah strategic director Dzulkefly Ahmad and Bandar assemblyman Azan Ismail have yet to publish their asset declarations.

Although asset declarations are common around the world, with more than 150 countries introducing asset declaration requirements for public officials according to the World Bank, the long ruling BN government has yet to enact such laws.

MPs and Members of the Lords in the United Kingdom must declare certain financial interests to provide information on any financial or non-financial benefit that could be perceived to influence their actions, speeches or votes in Parliament.

PH has yet to make a stance on asset declaration, though chief secretary Datuk Saifuddin Abdullah told Malay Mail Online that asset declarations were part of the coalition’s manifesto for the 14th general election.

*Editor's note: An earlier version of this article incorrectly reported that information on Penang state executive councillors' asset declaration could not be found on the state government’s website, and has since been corrected.