Archaeologists search for a king in Sungai Batu

The remnants of the jetty that was built before 487 AD in Sungai Batu. — Images courtesy of CAGR USM
Follow us on Instagram, subscribe to our Telegram channel and browser alerts for the latest news you need to know.
By By Opalyn Mok

GEORGE TOWN, June 9 — Tucked between plantations along a quiet country road near Merbok, Kedah, a team of archaeologists and students are busily excavating at a site that is known as South-east Asia's oldest civilisation.

This is Kedah Tua in Sungai Batu, an ancient civilisation that dates back to 535 BC, earlier even than Borobudur in Java (9th century AD) and Angkor Wat, Cambodia (12th century AD).

That's not all... this kingdom was a major iron exporter at the time, complete with mines, a smelting factory, a port and administrative buildings to support the industry.

What is missing are remnants of a palace, its thriving city and the burial sites of its people.

Since 2009, archaeologists and archaeology students from Universiti Sains Malaysia’s (USM) Centre for Global Archaeological Research (CGAR) have been excavating the site to find these remnants and piece together the rise and fall of this ancient advanced civilisation in Kedah.

The kingdom of Kedah Tua

“In 535 BC, Kedah Tua was already exporting iron and this means its social hierarchy in the world was very high, they must have had a raja but so far, we have yet to uncover evidence of one,” said CGAR director Datuk Mokhtar Saidin.

The ritualistic site that was built in 110 AD with an addutuon built on top in the sixth century.

“We call it Kedah Tua because we are still not sure about what type of kingdom there was during that period,” he added.

Kedah Tua was known as kedaram, kataha, kalaha or cheh-cha previously and this is directly linked to its iron industry because those words mean iron in different languages

He said it was not just any ancient civilisation but an advanced one with geologists to detect and mine iron and the technology to smelt it.

Iron needs 1600 degrees Celsius to smelt and in that period, the Kedah Tua kingdom already had that technology.

“The technology must be from somewhere else, from the migration of people from the west to the east, the knowledge flows to China,” Mokhtar said.

When the site was discovered back in 2009, Mokhtar said they didn't know the significance of it. 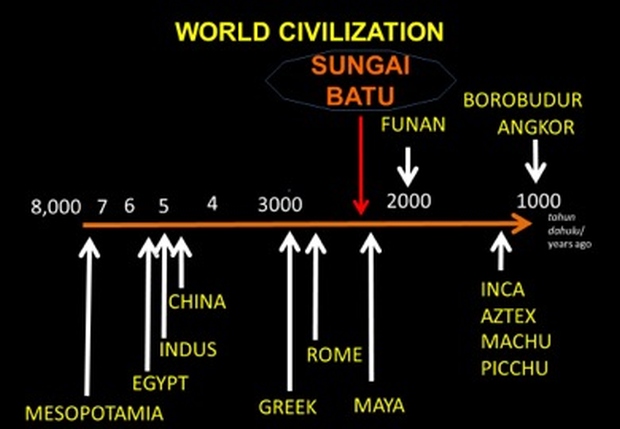 The discovery of 12 jetties to form a major port off Sungai Batu was a sure sign that this was not just any small iron smelting plant but evidence of a thriving civilisation that was a major iron exporter to the world.

“It preceded Borobudur, it preceded Angkor Wat, it is history we never knew and discovering it as a civilisation meant history has to be changed… the oldest civilisation in South-east Asia is here in Malaysia, in Kedah Tua, not Borobudur,” he said.

After almost 10 years of excavating the site, Mokhtar believes there are still more discoveries waiting to be found.

Apart from the iron smelting industry, the port and the accompanying ruins of administrative buildings, they also found a monument of ritual.

“Back in 535 BC, they practised animism, we can clearly see the monument facing Gunung Jerai and we believe that from the 6th century onwards, they moved on to Hindu-Buddhism as we can see signs of a stupa which is indicative of Buddhism,” he said.

He added the Hindu-Buddhism influences could be due to the Silk Route when traders passing by stopped here and introduced their beliefs and religions to the people. 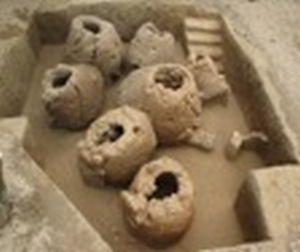 Samples of the furnace used to smelt iron during that period.

“We have yet to find burial grounds of the civilisation and we do not know how the kingdom fell but I have mapped out over 40 sites that I believe could be the burial grounds,” he said.

Based on other civilisations of the period, Mokhtar believes that the burial grounds will be very near the mountain, which is the nearby Mount Jerai.

“I've mapped the sites from Mount Jerai to Sungai Muda to Sungai Merbok, the burial grounds must be around here and we are also looking for the habitation site and most importantly, the istana,” he said, using the Malay word for palace.

Mokhtar and his team have a long way to go trying to find more evidence of the ancient civilisation because he believes the kingdom was spread out over 1,000 square kilometres from Sungai Batu up to Jeniang and Sik.

The origins of the Kedah Tua civilisation are unclear but Mokhtar does not dismiss the possibility of the people being descendants of the prehistoric settlement found in Guar Kepah, only about 20 kilometres away.

“The Neolithic settlement in Guar Kepah is about 5,000 years old before they found iron while Sungai Batu is 2,600 years old so it is possible that it took them about 2,500 years to slowly move to Sungai Batu, to develop and eventually learn iron smelting,” he said.

“So, we have prehistory and just 20 kilometres away, we have civilisation, there could be a connection somewhere but I will still need to look for more evidence,” he said.

Guar Kepah is where three Neolithic shell middens were discovered by the British back in 1850s and a total of 41 prehistoric skeletons were excavated and brought to the National Natuurhistorisch Museum in Leiden, Holland.

Last month, Mokhtar and his team found a complete skeleton at the site that is about 5,710 years old. His team has continued excavating the site while a planned Guar Kepah Archaeological Gallery will be built there after excavation works are complete.

“Even the first Muslim sultan, in the 12th century, was also dealing in the iron industry right up until the 15th century,” he said.

While Mokhtar and his team continue to excavate the site, the complex is open to the public and visitors. An artist impression of what the jetty at Sungai Batu looks like previously.

It is proving to be a popular visitors' spot with some opting to stay for two days to observe the excavations and even join in.

“This is the start of archaeotourism in Sungai Batu and we have already introduced the first ever living culture gallery for visitors to experience excavations for themselves.

“The complex has a total of 97 excavated sites and apart from guided tours, visitors can also have hands-on experience excavating, brick making and iron smelting the way it was done during ancient times.

“This is our way of educating the people on how advanced we already were back in 535 BC, before there were handphones and internet, people were already mining iron, smelting iron and exporting it,” he said.

The living culture gallery and hands-on experiences are also a way to spur interest in a field that many perceive to be “boring,”, he added.

USM CGAR now has several archaeotourism packages for visitors that include its Archaeology Park, Lenggong Valley and Sungai Batu.

*Editor’s note: A previous version of this article contained an error which has since been rectified.