Lawyer Surendra Ananth (pictured) says the Perlis Islamic Enactment is like any other state law, and therefore must give way to federal law and the Federal Constitution. — Picture courtesy of Facebook/Surendra Ananth
Follow us on Instagram, subscribe to our Telegram channel and browser alerts for the latest news you need to know.

KUALA LUMPUR, Dec 11 — All state Islamic laws that currently allow children to be unilaterally converted to Islam should be amended to match a proposed federal law barring such acts, lawyers have said.

Lawyers said that the Perlis amendment of its state law on Thursday — which removed the need for both parents’ consent before a child can be converted to Islam — contradicts and conflicts with a planned federal law amendment.

Lawyer Surendra Ananth said if the Law Reform (Marriage and Divorce) Act’s (LRA) planned amendment which will require both parents’ consent before a child from a civil marriage is converted to Islam is passed and comes into force, the conflicting Perlis amendment requiring only either parent’s consent will be “null and void” in such cases.

“The Islamic Enactment made by the Perlis State Legislative assembly is a form of state law. It’s status does not change just because it is a “religious law”. It is like any other State law, and therefore must give way to federal law and the Federal Constitution,” he told Malay Mail Online when contacted, citing the Federal Constitution’s Article 75 which says federal law will prevail over inconsistent state laws.

In a controversial move, Perlis state legislative assembly passed an amendment to Section 117 of the state’s Administration of the Religion of Islam Enactment 2006, which changed the Bahasa Malaysia wording of “ibu dan bapa atau penjaganya” (father and mother or guardian” to “ibu atau bapa atau penjaganya” (father or mother or guardian) as those required to consent to a child’s conversion to Islam.

The federal government had last month proposed in Parliament an inclusion of Section 88A into the LRA, which would require among other things both spouses in a civil marriage to consent to a child’s conversion to Islam if one of the spouse becomes a Muslim convert and also takes into account the wishes of the child when they turn 18.

“Yes, all State enactments must be amended to reflect the position in the LRA, ideally to state parents or ibu dan bapa. Alternatively it is open to the courts to construe the word “or” as “and” to bring the enactments in line with the LRA,” he added.

Surendra also said the Perlis amendment should alternatively be struck down by the courts for being in conflict with the Federal Constitution and the Guardianship of Infants Act 1961, noting that the former also guarantees the right to not be discriminated on gender and the latter’s Sections 5 and 11 explicitly guarantees the rights of both parents to determine the upbringing of an infant — or a child aged below 18.

As religion is a matter for the state, all states in Malaysia have their own set of laws on the administration of Islam, with five other states and the federal territories also having the same position as Perlis in the BM version of their laws by only requiring one parent’s consent.

Kelantan’s state Islamic law touches on the methods of making a person a Muslim, but does not have specific requirements for child conversion to Islam. 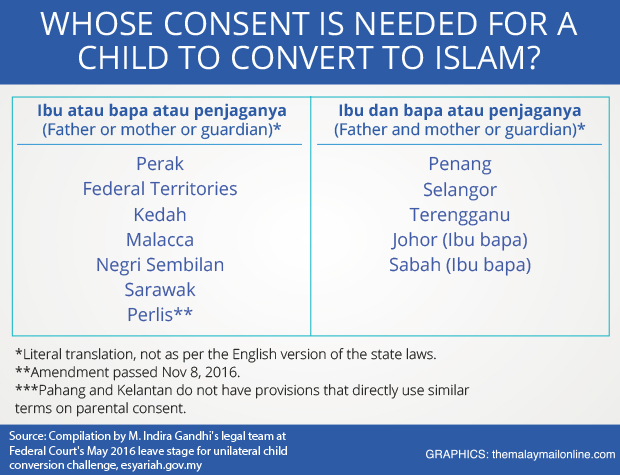 Family lawyer Honey Tan said “ideally” the wording of parents in all state Islamic laws should be amended to match the proposed LRA amendments.

“Even if that doesn’t happen, it is crucial that the LRA amendments be passed. Then at least those provisions in the state enactments may be challenged,” she told Malay Mail Online.

In a situation where the Perlis amendment and the LRA amendment exists side by side, Tan said the Perlis religious authorities will apply the state enactment while the National Registration Department (NRD) does not decide on conversions and will “just record” the religious status.

“So if the conversion is not challenged then they will record the children as Muslims,” she said, adding that such situations will result in much “heartbreak, anger, confusion and stress” for the children or parents involved.

Such administrative decisions will have to be challenged in civil court to set aside the conversion order, Tan said, noting that the LRA is a federal law that is in line with the Federal Constitution and the UN Convention on the Rights of the Child which Malaysia had acceded to.

“The child should be allowed to decide which religion she wants to practice, and this option should be left to her. In Malaysia, the almost insurmountable challenge Muslims face is to leave the religion,” she said.

Civil liberties lawyer Nizam Bashir said when both the Perlis amendment and LRA amendment is in force, the Perlis religious authorities will likely apply the state law while the National Registration Department should comply with the LRA amendment.

“In which event, the person affected has to go to Court to review their actions. Federal law prevails as per Article 75. Consequently, JPN should apply federal law,” he said, referring to the National Registration Department by its initials.

As for other state Islamic laws which only requires a single parent’s consent for child conversion, Nizam pointed out that Article 75 clearly states that state laws will be void to the extent of their inconsistency with federal laws.

In an event where the LRA has been amended, Surendra said all bodies including religious bodies must follow the LRA when it comes to civil marriages, adding that the court should strike down both the actions and the state law relied upon by any of these bodies to allow child conversion with only one parent’s consent in such cases.

Shariah Lawyers Association of Malaysia (PGSM) president Musa Awang said the LRA amendment has only been tabled in Parliament and has yet to be debated, saying that the Perlis amendment which applies to Perlis residents will still be valid.

“The amendment still applies unless there is an Act or parent law or federal law that overcomes or overrules,” he told Malay Mail Online when contacted.

Citing the Federal Court’s decision in the case of Subashini Rajasingam v Saravanan Thangathoray, Musa argued that it had defined the word “parent” in the Federal Constitution’s Article 12(4) to mean father or mother.

Musa also said all state Islamic laws such as the Selangor enactment which requires “ibu dan bapa” or both parents’ consent for child conversion to Islam should be amended to follow the wording in the Perlis amendment.

While saying that there will be a contradiction between the Perlis amendment and the proposed LRA amendment, civil liberties lawyer Andrew Khoo said it will not be a case of which of these two laws override the other, but will involve the Perlis law being tested against the Federal Constitution.

“The wording of the Federal Constitution is quite clear — “parent”, but with the understanding the the singular includes the plural. The “decision” on this matter in the Federal Court case of Subashini is “obiter”, i.e. it did not form part of the judgment in the Subashini case.

While the Federal Constitution’s Article 160B says its translation in the national language will prevail over the original English version if the Yang Di-Pertuan Agong prescribes it as the authoritative text, Khoo said “no such prescription has been made to-date” and the English language text is still authoritative.

The then Malaysian Bar president Christopher Leong had on June 18, 2013 noted that the government-printed Federal Constitution’s Bahasa Malaysia version had always translated “parent” to the plural form of “ibu bapa” (father and mother), but had in the 2002 edition translated it to read “ibu atau bapa” (father or mother).

On Friday, de facto law minister Datuk Seri Azalina Othman Said reportedly said Cabinet has agreed to the amendment of Article 12(4) of the Federal Constitution to give it more clarity.

She said in a separate statement that the proposed amendment to the LRA may require an amendment of the word “parent” to “parents” in the Article 12(4).

The issue of whether a single parent’s consent is sufficient for a child to be converted to Islam has been the subject of many court disputes, and it was recently raised at the Federal Court in Hindu mother M. Indira Gandhi’s challenge against her Muslim convert ex-husband’s unilateral conversion of their three children without her knowledge or their knowledge.

The Federal Court has yet to deliver a decision in Indira’s case.