In final verdict, two ex-commandos to hang for Altantuya’s murder

PUTRAJAYA, Jan 13 ― The Federal Court reversed today the acquittal of two men over the high-profile 2006 murder of Mongolian model Altantuya Shaariibuu, sending them back to the gallows in the end to the eight-year saga.

The decision by a panel of five judges chaired by Chief Justice Tun Arifin Zakaria was unanimous.

“The Court of Appeal order is set aside. The order of conviction and mandatory death sentence by the High Court are restored,” Tan Sri Suriyadi Halim Omar said in delivering the verdict.

In the August 23, 2013 acquittal, the Court of Appeal ruled that the High Court trial judge’s misdirection had rendered the duo's 2009 death sentence and conviction unsafe.

During the course of their trial, it was revealed that the Mongolian model was shot and her body blown up with explosives in a jungle clearing on the night of October 19.

Today, the Federal Court said the prosecution has successfully proven its case beyond reasonable doubt, also saying that Azilah and Sirul had failed to cast a reasonable doubt on the case against them.

When reading out the brief summary of the judgment, Suriyadi noted that both Azilah and Sirul had separately taken the police to the Puncak Alam crime scene.

He added that the two elite policemen are expected not to be easily intimidated.

“Here the respondents had independently led the police to the scene of the crime, which is a remote and isolated place and high up in the hills, where human remains were found at that place, subsequently proven to be that of the deceased,” the judge said, adding that no evidence was given that they were intimidated or tortured during investigations.

Suriyadi also said Sirul's unsworn statement that his involvement with Altantuya ended when he passed the model to Azilah outside the house of political analyst Abdul Razak Baginda, was “totally discredited” by several court evidence.

The judge pointed out the inconsistencies, nodding to the discovery of a blood-stained slipper in Sirul's car and jewellery purportedly belonging to Altantuya in his jacket inside his house.

Records of the Smart Tag device also showed that Sirul's car had passed through the Kota Damansara toll plaza that would be a “natural route” to Puncak Alam at 9.57pm on October 19, 2006, Suriyadi said, adding that it was as if Sirul was left with no defence.

Suriyadi also said Azilah's alibi defence that he was not present at the crime scene was “unsustainable” and no better than a “mere denial”.

He cited telecommunications giant Celcom's call logs which showed that the former policemen had made calls from his handphone in areas close to Puncak Alam at 10.15pm and 10.19pm, and from Puncak Alam itself at 10.43pm and 11.16pm on the same day.

The station diary entry that purportedly showed Azilah as being at the Bukit Aman police headquarters around the time of one of the phone calls is tantamount to “hearsay” and cannot collaborate his alibi defence, the judge said.

“It is common knowledge that the distance between Wangsa Maju and Bukit Aman to Puncak Alam - the scene of the murder ― is very far apart,” he said.

Azilah had previously said his involvement with Altantuya ended at the Bukit Aman police headquarters.

Suriyadi also said the “common intention” of Azilah and Sirul to commit the crime was shown through their joint presence in a car that eventually picked up Altantuya ― which would give the duo the “time, space and opportunity to formulate” the crime.

He then listed all the crucial evidence which would lead to the conclusion that the duo were at Puncak Alam, including their driving off from Bukit Aman with Altantuya on that night ― the last time anyone saw her alive.

“Cumulatively, by linking all the connective pieces of evidence when they were together, to the day when the scene of the crime were independently and separately shown by them, we are satisfied that the prosecution had established the ingredient of common intention,” he said.

Abdul Razak was previously charged with abetting Azilah and Sirul in the murder but was acquitted on October 31, 2008, after the Shah Alam High Court ruled that the prosecution had failed to establish a prima facie case against him.

The prosecution did not appeal against the 2008 acquittal of Abdul Razak. 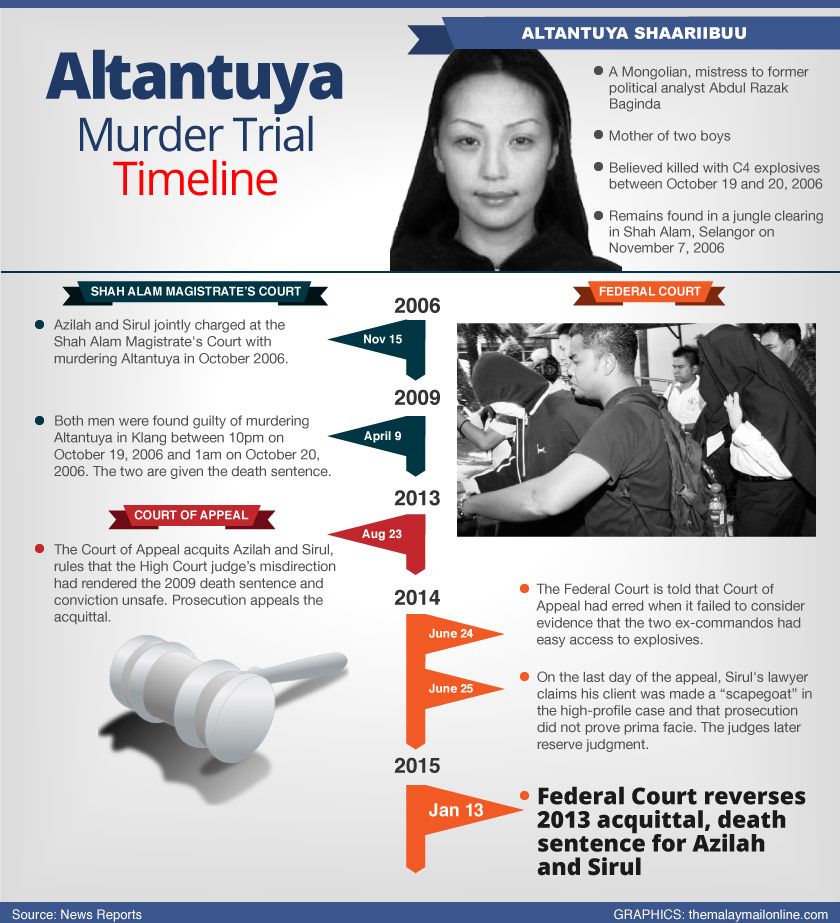