KUALA LUMPUR, Feb 26 — Sometime this week, or even as early as today, the 30 millionth Malaysian will be born and it will most probably be a Malay boy.

This is based on the Statistics Department’s figures that show males outnumbering females at birth, by a ratio of 107:100 and Malays form the largest segment of the population.

According to the Statistics Department, Malaysia’s population has more than tripled since it was formed in 1963.

Back in 1957 when Tunku Abdul Rahman shouted “Merdeka” seven times in the newly-built Stadium Merdeka on August 31, there were only 6.3 million Malayans.

What’s more, there were only 410,500 Sabahans and 693,200 Sarawakians then, according to the book, Malaysia’s Demographic Transition: Rapid development, Culture, Politics by Richard Lete.

Some expectant mothers who spoke to The Malay Mail Online were both surprised that the population had almost grown to 30 million and delighted that their babies could be the 30 millionth Malaysian.

“I’m surprised and wasn’t aware that our population is that huge. I hope he will grow up in a good and healthy environment, with a loving and caring society,” said 28-year-old Muniraa Abu Bakar from Selayang.

Meanwhile, former national swimmer Cindy Ong, 30, who is also expecting her second child tomorrow said she feels special to be part of such a historic event and hopes that her baby girl is born healthy. Her husband, Tang Kit, was just as excited.

“It’s great that she’s going to be a part of the 30 million Malaysians, we’re going to be carrying the baton of the future of Malaysia,” he said of his yet-to-be-born daughter, Kiara Belle Kit.

But Malaysia is, however, far from former Prime Minister Tun Dr Mahathir Mohamed’s vision to see a 70 million-strong population by the year 2100. 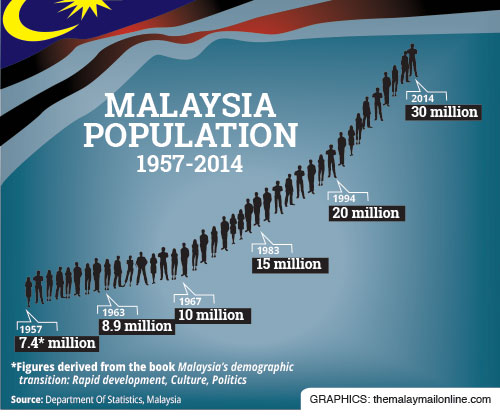 Meanwhile, the Indian population will increase to 2.3 million (5.9 per cent), while the non-Malaysian citizen category is expected to increase to 2.7 million (7 per cent). The group under others will marginally increase to 477,000 (0.8 per cent).

In comparison, according to the book by Lete, based on the population of 6.3 million in the peninsula when Malaya became independent in 1957, the Malays constitute 49 per cent, Chinese, 38 per cent, Indians 11 per cent, while others, 2 per cent.

It is projected that the life expectancy for male in 2040 is 78 years and 83 years for female.

Between 2010 and 2040, Malaysians aged 65 years and above are projected to increase more than three folds of the 2010 population.

“The increase will lead Malaysia to become an ageing population in 2021 when the population aged 65 years and over reach 7.1 per cent,” according to the Statistics Department’s web site.

At the time of publishing, Malaysia is 940 away from becoming a nation with a 30 million population.