Tryke founder Timothy Wong (fourth left) and co-founder Shazwan Abdul Razak (fifth right) along with their staff pose for a group picture during the TRYKE e-scooter soft launch at RekaScape in Cyberjaya November 22 2019 . — Pictures by Choo Choy May
Follow us on Instagram, subscribe to our Telegram channel and browser alerts for the latest news you need to know.
By AZRIL ANNUAR

At the soft launch ceremony today, co-founder Shazwan Abdul Razak told reporters that following their testing in Iskandar Puteri in Johor, the service saw Cyberjaya as the ideal location to expand due to its ready infrastructure and vibrant young community.

“So we started in Iskandar Puteri because that was the perfect testbed for us, there were professionals over there, students, tourist markets. 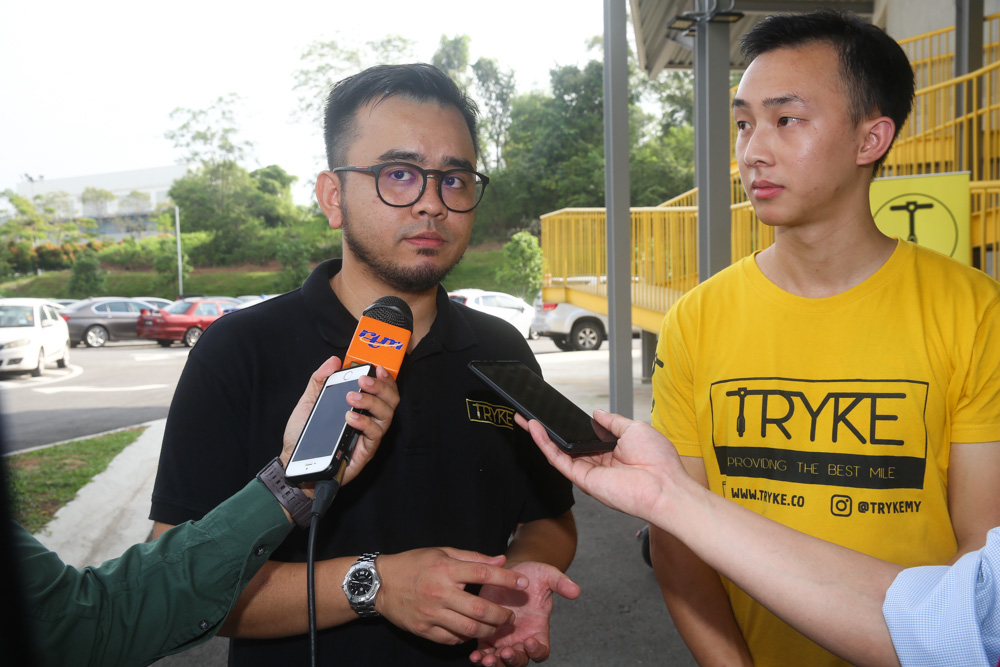 Tryke’s e-scooter is an alternative means of transportation for travelling short distances in and around the city. The company said it has 110 times the efficiency of a standard motor vehicle, and can travel five times faster than walking, and takes up half the space of a bicycle.

To begin a ride, users will be charged RM1 for an unlocking fee, with a base fee of 30 sen per minute thereafter until the return of the e-scooter at the designated docking spots.

Users can also get unlimited ride passes for daily, weekly or monthly usage starting from RM9.99 for daily pass, RM39 for a weekly pass and RM99 for monthly passes.

Part of the e-scooter’s security system is a GPS chip that allows the firm, Tryke Transportation Sdn Bhd, to monitor the movement of the electric vehicle as well as who is using or abusing it. 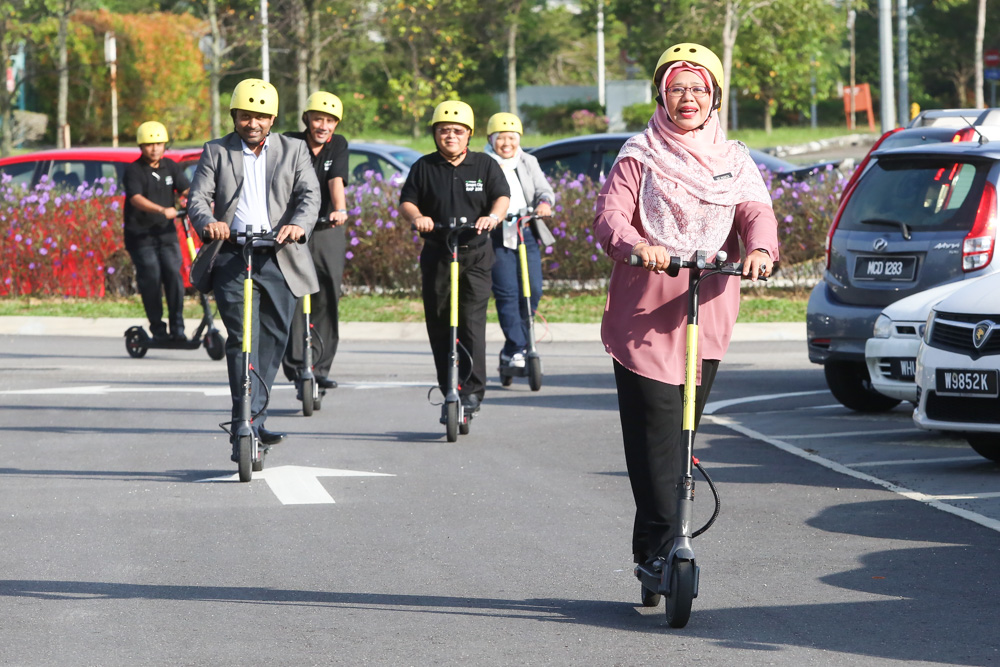 People try out the Tryke e-scooters during its soft launch at RekaScape in Cyberjaya November 22, 2019.

However, this also allows them to protect users from being accidentally overcharged if they did not log out of the vehicle after their journey is over and have already docked the e-scooter in the designated bays.

“If that happens we will call the user and ask them if they are still using the e-scooter. If they tell us that they have stopped using but forgot to switch it off, we will reimburse the user from the moment they stopped using the vehicle,” said founder Timothy Wong.

Although the e-scooter is currently the primary product available, Tryke also plans on designing other vehicles such as mopeds among others and is confident of having them rolled out by the first quarter of next year.

“We are looking at designing other types of vehicles, so we should have them by first quarter of next year. The design is by our team but the manufacturing... we import the components because as we expand our vehicles we do have plans to do the assembly and manufacturing in Malaysia.

“At the moment, some of the components are imported but we want to source out our batteries locally,” Shazwan said.

Both Shazwan and Wong are targeting to expand to seven cities and seven universities in Malaysia by the second quarter of next year and at the moment, the local start-up is on track.

At the same time, the firm is also looking at the Middle East and Indonesia, including joining the World Expo in Dubai next year but plans on turning Malaysia into its fortress. E-scooter sharing service Tryke's founder Timothy Wong poses for a photo with the e-scooters at RekaScape in Cyberjaya November 22, 2019.

Touching on user protection, Wong said that the moment a user unlocks the vehicle, the individual is protected by an insurance coverage.

“As part of the rider fee, as soon as you unlock the vehicle you are protected by the insurance. If you were to have an accident, you are protected up to RM2,000 for medical expenses, hospitalisation and public liability.

“And also if, under very improbable causes that you meet a significant accident where there is permanent dismemberment or paralysis, you are reimbursed up to RM20,000,” he said.

However, Shazwan pointed out that preventive measures are better than cure. The Tryke app also have the safety steps that needs to be taken and he believes in engaging with the user community in order to educate them.

Tryke also encourages users to ride only on pedestrian walkways and bike paths. Users must ride within the safety areas, within the speed limit and abide by traffic rules at all times.

The system’s real-time tracking and geo-fencing will trigger an alarm and cause the scooter to slow down significantly if users venture out of the designated zones of operations. They will be notified on the mobile app to return to the closest zone of operations immediately.

Constructed of aluminium alloy, the e-scooter weighs 14 kg and can go up to 40 km/hour in total distance with a maximum speed of 25 km/hour.