In a family photo, Charles ‘Big Chucky’ Craig, a beloved youth basketball coach who was shot dead in 2005. — Picture by Matt Roth/The New York Times
Follow us on Instagram, subscribe to our Telegram channel and browser alerts for the latest news you need to know.

LAUREL (Maryland), April 9 — It was a soaking and memorable rain that night, and the blood that spilled from the bullet holes of 35-year-old Charles Craig, washed down a grate in the low spot of the strip-mall parking lot.

Closing time at J’s Sports Café here had sent a crowd outside, into that hour when no good comes outside a bar. Taunts and arguments turned to shoves and fists, until it seemed that half the people were fighting and the other half trying to break it up.

But the ferocity eventually faded, and thoughts turned to getting out of the storm and back home. Craig walked toward his car. He was 6-foot-4 and 310 pounds. His friends knew him as Big Chucky. A generation of children at a recreation centre near Washington knew him as their basketball coach.

He was wearing jeans and sneakers and a bright yellow, short-sleeve polo shirt. He never saw the shirtless man come up behind, holding an unregistered silver Colt revolver. The man fired four times.

The shooting created pandemonium in the parking lot. The killer left in a getaway car and dropped the gun. It was about 2:40am.

Craig was dead by the time police arrived. They found his soaked body surrounded by paramedics and a huddle of distraught friends. They found an unhinged man who had picked up the gun with a T-shirt and hidden it behind the tyre of a parked car.

A 16-year-old named Kevin Durant was not at the scene, but would soon hear what had happened. Big Chucky was a mentor, a father figure and a coach. Not long after, Durant began to wear jersey No. 35, a nod to Craig’s age when he died.

Durant is 28 now, an eight-time All-Star hoping to lead the Golden State Warriors to an NBA title, and his No. 35 jersey has been one of the NBA’s best-sellers for nearly a decade. Fans around the world wear jerseys with Durant’s name and number. At the University of Texas, where Durant spent one season before joining the NBA in 2007, his No. 35 is retired.

Durant was about eight when he met Craig at Seat Pleasant Activity Centre. The boy spent countless hours and days there over the next several years, taking naps on the floor of the gym behind the huge curtain that hung from the ceiling, learning from a series of coaches and mentors.

Craig, as important as any of them, was the kind of man who handed kids a few dollars to get a snack, took them to the movies and offered them rides home.

“He loved kids,” his mother, Claudette Craig, said in a recent interview. She was packing up her house in Washington for a move to Georgia but had a photo of Chucky on the kitchen table that she wanted to carry with her. “He would do anything for any child. He had a van, and he’d come by with a bunch of kids and say, ‘Ma, I got a bunch of hungry kids, can you feed ‘em? I’d say, ‘If you get the food, I’ll cook it.’ He was a terrible cook.”

Among those kids who tumbled out of Craig’s van was a young, tall and skinny Durant. The activity center was a home away from home for Durant, a safe and predictable place, and Craig was a father figure to those like Durant who did not have close ties to their fathers. 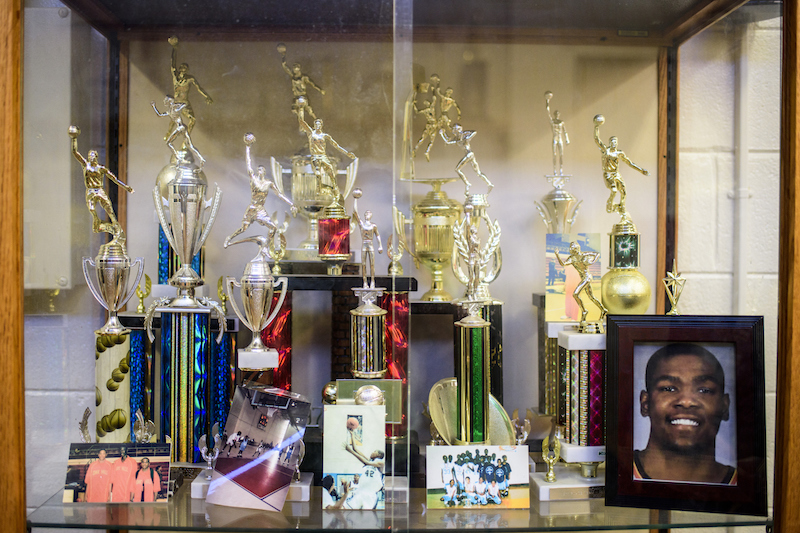 Charles Craig was at J’s Sports Café with his two younger brothers, Kerrick Craig and Kory Nicholson, and a couple of friends, including LaDawn Taylor.

Inside the bar, Taylor recognised someone she vaguely knew from high school, Terrell Bush.

When Craig and his brothers stepped into the night, they saw an unfamiliar couple arguing in front of a pawnshop. A crowd gathered as the woman started hitting the man.

But as the dispute intensified, Kerrick Craig, 46, said, one of his friends intervened in an attempt to break it up. Kerrick Craig said Bush hit him, and he hit Bush. In an instant, a brawling street fight started.

One punch knocked Kerrick Craig’s glasses off. He said he fell on his back and, scared of being trampled, fought people off with his hands and feet. “There were about five us fighting in front of 50 or 60 people,” he recalled. “Chucky was trying to get in there, but girls were holding him back.

But Chucky Craig stood out. He was a big man in a bright-yellow shirt.

“A guy ran up on my brother and shot him and then shot him again and jumped into a car and pulled off,” Kerrick Craig testified.

“Were you able to get a good look at the person that shot your brother?” a lawyer asked.

“Not good enough,” Craig said. “My glasses were gone.”

Paramedics were the first to respond to the shooting. They declared Chucky Craig dead. The first officer from the Prince George’s County Police arrived at 3am.

One man immediately caught his attention. The man was hysterical, crying and screaming that someone shot his friend in the back.

“In the middle of all that, he just literally stopped,” Burgess said. “And it was like he had a sudden stop of the emotion. And he just turned at me and very calmly said, ‘I am going to tell you some very important information, man.’ And I said, ‘Well, please do.'”

The man, LaRonn Smith, told the officer that he had hidden the gun. When he saw the assailant drop it as he got into the getaway car, he walked straight for it, grabbed a wet white T-shirt from the ground and picked it up, careful not to get his own fingerprints on it. He carried it toward parked cars and hid it behind the front wheel of one. He led Burgess to it.

Johnson later swabbed the gun. “It was too wet to do any prints off of it,” she said.

The parking lot was littered with debris. But the rain, she said, “destroyed anything that I might have collected. I did try, but I didn’t get anything.”

It is unclear whether the police were on the trail of Bush in the days after the shooting. But four days later, on the eve of Craig’s funeral, Kerrick Craig called Detective Kelly Rogers, a homicide investigator for the Prince George’s County Police. His girlfriend worked with a woman who said her boyfriend may have shot and killed someone in Laurel over the weekend.

He gave the detective a name: Terrell Bush.

Kerrick Craig, Jr., wears a tattoo dedicated to his late uncle Charles Craig, in Capitol Heights, Maryland, March 30, 2017. ‘Big Chucky’ was a beloved youth basketball coach here before being shot dead in a fight outside a bar; the NBA star Kevin Durant was one of the many lives he touched. — Picture by Matt Roth/The New York Times

Bush was a fugitive for months. Sometime in late May, he arrived in Clarkston, Georgia, an Atlanta suburb, at the apartment of Steven and Denise Jackson. They had met Bush a time or two before, at a friend’s house in Maryland, and knew him only as Bush Baby. Now the friend asked a favour: Can Bush Baby come stay with you in Georgia?

He never told them exactly why he moved from Maryland.

“Just things was hot in the city. He needed a change,” Steven Jackson testified. “Got into an argument at a club or something, and he was leaving the city. He didn’t want to be around violence anymore.”

One day in December, Bush, Jackson and two friends were at the apartment. They noticed unmarked trucks driving back and forth in the complex. Inside were a police officer from Maryland, local sheriff’s deputies and US marshals.

Jackson left the apartment and tried to run from the officers, knowing he had an arrest warrant from Ohio. But Cpl Michael Carlson of the Prince George’s County Police was not in Georgia to look for Jackson. He and others, armed and wearing bulletproof vests, went to the door.

“On the porch entering the apartment, I saw Bush standing in the hallway,” Carlson testified. “I told him to get on the ground, that we had an arrest warrant for him, and I placed him in handcuffs.”

Bush has been in custody since.

The trial in the Circuit Court for Prince George’s County began on Monday, August 21, 2006. Bush was 25. Durant was about to start his freshman year at Texas.

The trial took two-and-a-half days before it went to the jury. Bush did not testify on his own behalf. Fourteen witnesses were called to the stand, but only four who were at the scene of the murder when it occurred — all of them friends or relatives of Charles Craig’s.

The case hinged largely on LaRonn Smith, the only one willing and able to identify Bush as the killer. He was a lively witness who admitted that he had been drunk that night.

Closing arguments were made on the trial’s third day. The defence argued that only one witness, a questionable one, had identified Bush as the culprit. Few potential witnesses were contacted, the defence added, and no evidence was directly linked to Bush.

State prosecutors pointed out evidence that Bush was at the bar that night, was identified by a witness as the gunman, and was soon in Georgia living under an alias.

“This isn’t a conspiracy,” the state prosecutor, William Moomau, said in his concluding remarks. “This is a case of this defendant killing a man and wanting to get away with it. And all of his actions afterwards point to that.”

The jury began deliberations at 11:10am on the third day of the trial, but could not reach a verdict.

The judge sent the jurors home for the night. They returned at 9am. At 2:33pm, they announced their verdict: Guilty of first-degree murder.

Bush was sentenced to life in prison for first-degree murder, plus 20 years for the use of a handgun in a felony. Appeals have been unsuccessful. Bush, serving his sentence at North Branch Correctional Institution in Cumberland, Maryland, declined repeated requests to be interviewed.

Two days later, classes began at the University of Texas, where Durant would begin to wear jersey No. 35. — The New York Times

Joshua to use lessons learned from Usyk defeat in rematch