Actress Qiu Wen (left) plays a schoolgirl taunted by her classmates for having dark skin while Haoren is a secret admirer who leaves gifts at her desk to help her lighten her complexion. — Picture via Instagram/haorened
Follow us on Instagram, subscribe to our Telegram channel and browser alerts for the latest news you need to know.
By TAN MEI ZI

PETALING JAYA, Jan 25 — A Malaysian musician has defended the use of brownface in his music video which promotes a skin whitening product.

Choo Hao Ren, who goes by the stage name Haoren, released the music video White Doll yesterday which features actress Qiu Wen with make-up slathered on her face and body to darken her appearance.

In the video, Qiu Wen plays a student who gets bullied by other girls at school for having darker skin.

One scene shows the girl’s classmates laughing at her after a canteen worker speaks to her in Malay, presumably trying to show that her dark skin had led the worker to mistake her race.

Haoren plays a male classmate who notices the girl’s dilemma and starts leaving gifts at her desk to help her get fairer skin.

The gifts included an umbrella, a cardigan, sunblock, soya milk, and drink sachets meant to whiten her complexion.

Sixty days later, Qiu Wen’s character has noticeably fairer skin and the classmates who once taunted her are now gathered around her to marvel at her new appearance.

Qiu Wen’s character also begins a romance with the mystery admirer who left her the gifts.

At the time of writing, the music video has garnered over 176,000 views since it was posted on YouTube yesterday.

The reactions to White Doll have been mostly positive and the music video only has 460 dislikes, a stark contrast to its 8,100 likes.

Some social media users have called out Haoren on his Instagram page, saying that the use of brownface stigmatises people with dark skin and paints them in a negative light.

“Dehumanising dark-skinned girls just to promote a skin whitening product. How would young girls feel when they see this?

“The worst part is that the majority of the comments are positive about this,” said Instagram user @nicthebum.

“This is so inappropriate. With all due respect, please reconsider the next time any of you are making content like this again,” wrote @hubertceo.

Many critics also compared Qiu Wen’s makeup to blackface, which is a form of racist theatrical makeup used to lampoon people of African origin.

Brownface is seen as a variant of blackface as it is used to imitate people from Latin America, South Asia, or Southeast Asia. 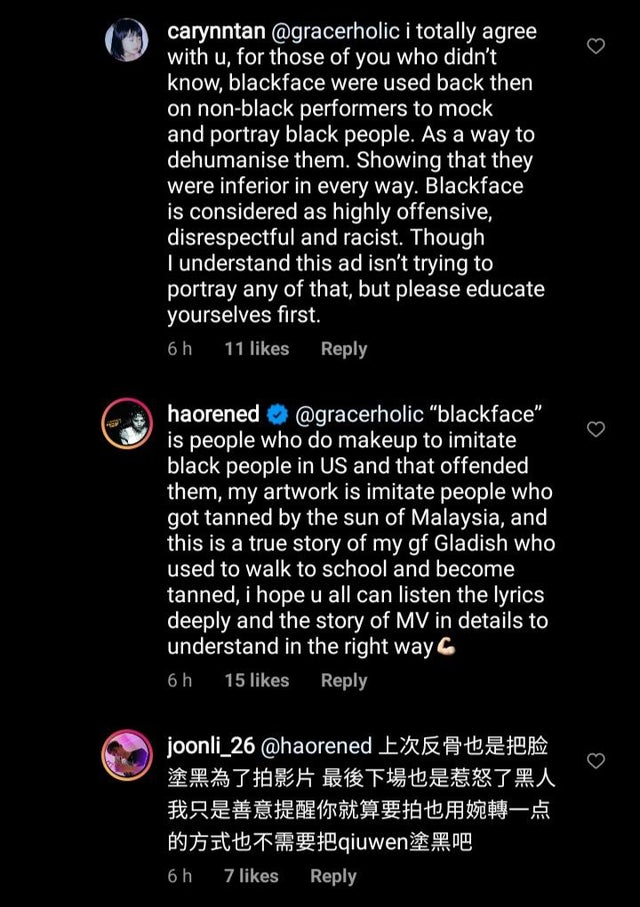 Haoren said the music video is inspired by the experience of his girlfriend Gladish at school. — Picture via Instagram/haorened

Haoren responded to the criticism by brushing off the blackface accusations and saying that the video was inspired by the experiences of his girlfriend Gladish at school.

“‘Blackface’ is people who do makeup to imitate black people in (the United States) and that offended them.

“My artwork is imitating people who got tanned by the sun in Malaysia and this is a true story of my girlfriend Gladish who used to walk to school and become tanned.

“I hope you all can listen to the lyrics deeply and the story of the music video in detail to understand in the right way,” wrote Haoren in his Instagram comments section.

The Klang-born singer did not comment on whether the music video reinforces negative perceptions about having dark skin.

Brownface and blackface have had their fair share of screen time in Malaysian productions over the past few years.

A drama adaptation of the Dayang Senandung folktale came under fire last year after its main actress was seen wearing blackface to play the role of a princess cursed with dark skin at birth.