Thursday, 05 May 2022 9:22 AM MYT By Praba Ganesan
Follow us on Instagram, subscribe to our Telegram channel and browser alerts for the latest news you need to know.
By Praba Ganesan

May 5 — It’s a stressful time for Saifuddin Nasution.

His political future in PKR — by extension, Malaysian politics — is in doubt. Two years ago, he was domestic trade minister, today the party deputy president race decides his fate.

Beat Rafizi Ramli and he is heir apparent to Anwar Ibrahim, lose and uncertainties abound.

If the latter, Anwar will reappoint him as secretary-general — a position he has held on and off since 2010 — however, it too painfully highlights his limitations, therefore limits his ambitions henceforth.

Which forces him to grasp at straws, to be relevant and win the race.

This brings us to his recent denouncement of the five digital banking licences issued which he claims has inadequate numbers of Bumiputera players.

The column has previously covered the dangers of brazen demands for Malay hegemony and entitlement, so this Saifuddin development sheds some light on the individual but inadvertently switches on spotlights on the party’s multicultural dysfunction.

Except, the party is multiracial. When he says Malays are side-lined by other Malaysians in this instance, he risks splitting PKR on race. It appears Saifuddin is convinced Malay members would celebrate his defence of their “rights” and vote for him, and the rest of the PKR members — Indians, Sabahans, Sarawakians and Chinese — accept Malay ascendancy inside the party and will therefore ignore the vitriol and vote for him anyways.

Saifuddin was raised inside Umno and it is unsurprising for him to walk this path. Yet a broader examination of the party shows Saifuddin is not alone and precedents are bountiful. 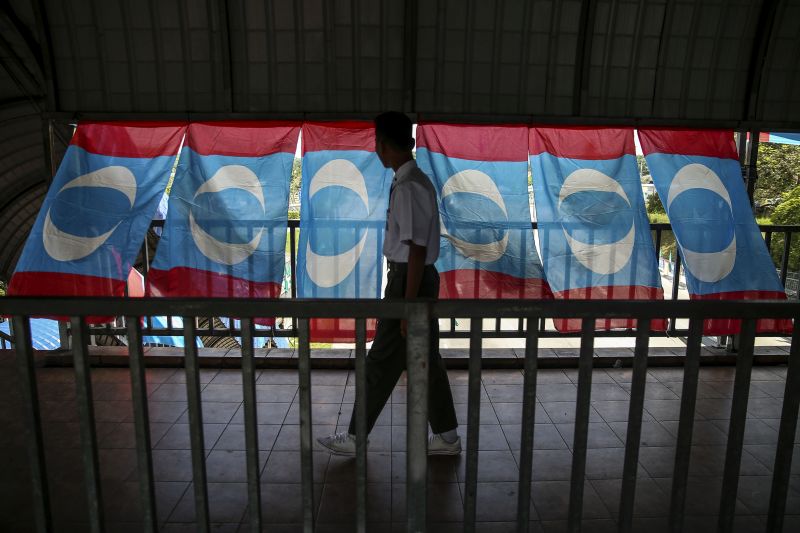 Twenty years was available to the party to either find the leaders or the courage to champion multicultural Malaysia, instead it swung wildly in whichever direction the votes were, every single time. — Picture by Yusof Mat Isa

In the early Noughties, Keadilan was a proper mess. With only five parliamentary seats from GE1999 — three in Kelantan and one each from Terengganu and Penang — and Anwar in prison, there was no direction.

The choices were stark. To build on Muslim protest votes and PAS’ assistance — as the wins indicate — or to push on as a multicultural party as espoused in its constitution? As President Wan Azizah Wan Ismail was a mere proxy for her husband, all factions were free to hit out at each other as leadership went missing.

In the aftermath of the 2001 Taman Medan race clashes, questions of whether Keadilan was for all or just some festered. Malaysian Indians like P. Uthayakumar left in disappointment.

Even the merger with PRM (Parti Rakyat Malaysia) in 2002 did not foster greater multiculturalism in the party. PRM was expected to raise the level of discourse in the party but in the end its leaders were subsumed into the moral morass the party was already drowning in.

The eventual political uptick was brought by historic protests in 2007 — Bersih on November 10 and Hindraf on November 25, both independent movements -- which resulted in the famous 2008 March election outcome.

PKR did not raise its multicultural game to win in 2008, it was a default beneficiary.  X number of Malaysians were appalled by Barisan Nasional’s (BN) heavy-handed attack on democracy and the trio of DAP, PKR and PAS as alternates prospered.

Still, accidents can alter a journey fortuitously, but at every step of the way since 2008 till 2018, the party with or without Anwar failed to embrace the multiracial zeal. Which is why it was completely clueless when Umno attacked it for presumably failing Malays during the Pakatan federal government (2018-2020).

With every attack, PKR restated its desire to protect Malays even more than Umno. Rather than educate and cajole Umno to the 21st century — embarrass it for its archaic think — it instead resorted to competing with Umno for the same space.

PKR could not defend the idea of Malaysia. It lacks faith in the idea.

Twenty years was available to the party to either find the leaders or the courage to champion multicultural Malaysia, instead it swung wildly in whichever direction the votes were, every single time.

Anwar is a spent force and defeat in the upcoming general election must surely mean the end. Even nihilism has a conclusion.

Which returns us to the opening gambit, the deputy president race which determines Anwar’s replacement which in turn means the leader of Pakatan Harapan.

While Saifuddin predictably underwhelms, the other option Rafizi brims with opportunism.

Ayuh (Come on) Malaysia! is the campaign, with Rafizi the candidate and Nurul Izzah Anwar the movement’s energy.

However, as every effort prior, it is more rhetoric than founded on ideology. They say “Come on, Malaysia”, but which Malaysian first? Unless they say all Malaysians are equal, how can they in good conscience speak about equality? It’s always qualified, their sentiment.

They want their cake and to eat it too.

They’d forgo a principled position on race in Malaysia as it certainly will be confrontational. The whole race matter has been contorted to absurdity through the decades; a party or movement which wants to reorganise race in Malaysian life or in their party would upset many.

But that’s an awesome opportunity to lead the party to multicultural principles despite objections.

Saifuddin or Rafizi, PKR will only get another version of race apologists who seek wedge issues to gather votes in a general election. Because the right way is too hard.

Why would they bother? It’s easier to pretend.