Thursday, 24 Feb 2022 9:20 AM MYT By Praba Ganesan
Follow us on Instagram, subscribe to our Telegram channel and browser alerts for the latest news you need to know.
By Praba Ganesan

FEBRUARY 24 — The world’s university debating championship is flooded with teams — more than 400 elite teams at the annual meet.

Oxford, Sydney, Harvard and the usual suspects. What is inevitable — replicated by political parties worldwide — is that reputation and longevity translate to wins.

Therefore, newcomers target a spot in the top 48 after the preliminaries. It’s called the Break.

Not stellar on a CV when read by those beyond the debate fraternity but it is proof of life — fuel to survive and then to thrive in the next stage or competitions after.

The debate parlance is certainly familiar to former university debater and Muda president Syed Saddiq Syed Abdul Rahman as he prepares for the Johor state election.

He faces a clutch of old, much older and really too old leaders from a myriad of parties, most happy to strangulate his party in its first foray into the big leagues.

Muda’s goal, this column advises, is to still possess a CV after voting day on March 12, even if not spectacular on the seat tally. To have proof of life. To give notice to pundits and strategists, even if not casual voters, they have arrived.

Even Emmanuel Macron — whom Saddiq looks up to for inspiration — won 24 per cent or less than a quarter of the support in the first round vote en route to winning the French presidency in 2017. Once ambition is right-sized, even if not self-limited, expectations can electrify.

In the run-off election, Macron yielded a dominant 66 per cent to win outright. Saddiq’s second round is the general election, probably later this year. He should be mindful of the long game despite being distracted by the short game in Johor. 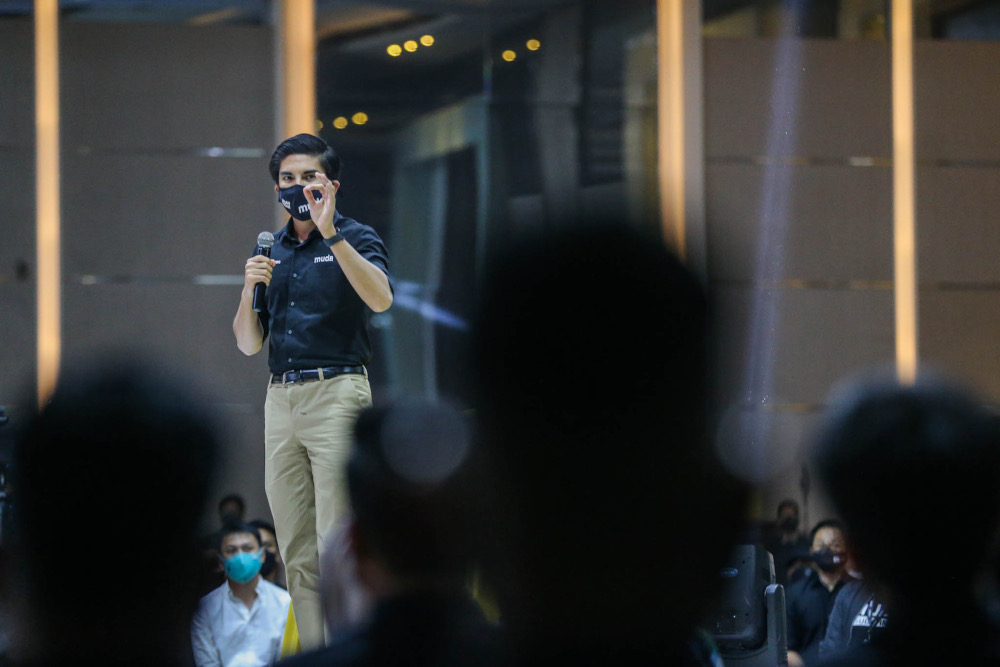 What does Muda see when it looks to the past for encouragement? As the new kid in class.

PAP’s entry into Malaya in 1964 (GE2) is often referred to, though not apple to apple comparisons with Muda’s trajectory today.

Already dominant in Singapore, Lee Kuan Yew’s incursion — winning only Bangsar out of nine contested — was a temperature check. The value of the single win was academic as Singapore — and effectively PAP — was expelled from Malaysia a year later.

The four famous instances of victorious entry — Gerakan in 1969, Berjaya in 1976, Parti Bersatu Sabah in 1985 and Warisan in 2018 — were led by old order veterans. Lim Chong Eu broke MCA’s Penang monopoly in 1969, but 11 years prior he was MCA president, hardly a newbie.

Parallelly, to become a Malay-only party is a slow-burn and perverse. To be a brand name requires outlandish commitment to bigotry. Semangat 46 struggled in 1990 and 2018 Bersatu Pribumi squeezed in with 13 seats despite leading Pakatan Harapan.

Unsurprisingly, Bersatu’s stock rose in 2020 by being unequivocally race-first after dropping Pakatan — including parting company with Saddiq — to form Perikatan Nasional and recruit indiscriminately Umno leaders. A certain type of voter enjoyed its right-wing rigour and allergy to progressive politics.

Pejuang adds itself to the Umno pretenders list by throwing its hat in the ring, to battle 42 Malay-majority seats.

None of these examples are guiding lights for Muda and Saddiq. On one side, the constant repackages through the decades by non-BN parties to not change the game, only the outcome; and on the other, the divisive politics of Malay-exclusive parties which is based on rejecting social progress.

Muda has one MP whose four years in Dewan Rakyat and two years as minister sums up the party’s experience. No chart or graph necessary to realise its steep learning curve.

It is the genius of Winston Churchill that he turned Dunkirk’s 1940 large-scale evacuation into a public relations coup in the minds of Britishers. Three years pass before troops return to Europe to liberate it. Yet, the brilliance is when all was dour after Dunkirk, to remind people a defeat done right is victory’s stepping stone.

That’s the type of history Muda can learn from.

Johor is the start to inform people an army gathers in stages with a general election success for Muda awaits.

Fence-sitters question if voting Muda nixes the chance to back a winner, since Muda at best finishes fourth or fifth in simple assessments.

Firstly, inform people, no one is first or last in an election until voting day. Secondly, voting for the right team builds momentum to the general election regardless of the state result. Explain if Muda wins enough votes in Maharani and Sungai Balang, it enthuses chances to win Muar parliamentary where both seats sit in the general.

If Muar can organise itself, then there’s at least two Johor parliamentary seats to battle for in GE15, beginning with the race for the state seats which fall under them.

That’s eight and there are many more contestable seats in the GE. But we have to show intent in Johor first. Help us.

Whisper that and see how it goes.

Unfortunately, for now, there is no clear message from Muda except to avoid head-to-head contests against all of Pakatan. There are no soundbites to be repeated by supporters despite the party website keen on signing up volunteers.

In any insurrection, the early victories look like defeat to outsiders. It is the job of leaders to explain how every step adds to the movement.

The messaging is absent, other than to say they are not BN, not PN, not Pakatan, and here with inclusive progressive politics.

The thinking is not about winning in Johor, but to use the platform to present Muda’s ideas for Malaysia. That is the surest way to reach the first objective, not to lose deposit in the races. That is one-eight of votes cast or 12.5 per cent of votes in each seat.

That’s crossing the line, Saddiq. That’s making the break. Lose no deposit in any of the contests in Johor and Muda is in the game for the general election. Tell that and repeat the cycle.