The power of two as golf looks into the future

SEPTEMBER 13 — When the PGA Tour and European Tour announced new and exciting details around their Strategic Alliance which will see three tournaments being co-sanctioned in 2022 and greater rewards on offer to golf’s glory-hunters, England’s Tommy Fleetwood summed it all up rather aptly.

“It’s a small glimpse into the future,” said Fleetwood, who is a member of both Tours.

Indeed, the announcement that the Barbasol Championship, Barracuda Championship and Genesis Scottish Open will count towards both the PGA Tour’s FedExCup and European Tour’s Race to Dubai rankings from 2022 onwards is a massive leap into an exciting future which bodes well to the global ecosystem in men’s professional golf.

The Scottish Open, which has historically been part of the European Tour’s Rolex Series, will retain its place in the calendar the week ahead of The Open Championship next July and will boast a new title sponsor in Genesis, the luxury automotive brand from South Korea which also sponsors The Genesis Invitational at The Riviera Country Club in California every February.

For a player like four-time PGA Tour winner, Harris English of the US, the new-look schedule is boon especially when he has always wanted to play in the Scottish. “I’ll definitely play it next year and be over there for two weeks,” he said. “I think it’s cool; I definitely would like to play more in Europe. I think more Americans will go over there. I feel like it’s kind of helping both tours out.”

Scotland’s Martin Laird, who plays primarily on the PGA Tour and holds four victories in the US, added: “Everyone knows the PGA Tour is becoming worldwide. It’s kind of going that way. We play in Mexico, we play in a bunch of different countries already. When the TOUR and the European Tour teamed up, we all kind of knew this was on the cards at some point.”

As one of the rising stars of the game, American Will Zalatoris is now looking forward to broadening his playing horizons with the new opportunities to compete internationally. “I love the partnership with the European Tour. I think it’s great. A lot of guys go over for the Scottish anyways, so I think it’s a great move for the Tour. It’s good for the European Tour, it’s a win-win for everybody.”

In addition to the Genesis Scottish Open being co-sanctioned, there will also be access for 50 European Tour members to each of two PGA Tour events in 2022 for the first time — the Barbasol Championship, which will be played concurrently with the Genesis Scottish Open, and the Barracuda Championship, which will be played alongside the following week’s 150th Open Championship at St. Andrews. Both events will be added to the Race to Dubai for European Tour members.

As part of the Strategic Alliance, the Irish Open will also see a significant jump in prize money for its annual European Tour event — to US$6 million (RM24.8 million), starting in 2022 — nearly double the amount on offer at Mount Juliet earlier this year.

“When we announced the Strategic Alliance, we said it was a landmark moment for global golf’s ecosystem that would benefit all members of both Tours,” said Keith Pelley, Chief Executive of the European Tour. “Today’s announcement underlines that promise, with further enhancements to the Genesis Scottish Open, a strengthening of the Irish Open for our members, and direct access for European Tour members to two PGA Tour events.” 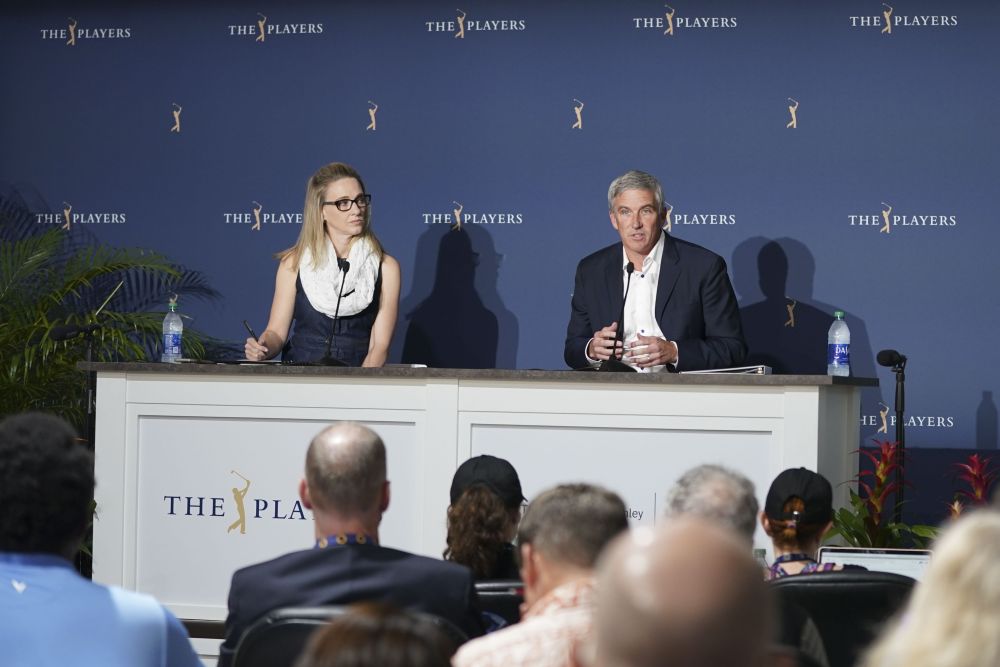 PGA Tour commissioner Jay Monahan (right) addresses the media about the coronavirus pandemic during the first round of the 2020 edition of The Players Championship golf tournament in Florida March 13, 2020. — Reuters pic

PGA Tour commissioner Jay Monahan said the partnership with the European Tour will allow both Tours to deliver the best tournaments to their players and world-class golf entertainment to fans, sponsors and TV viewers. And he said this was only the first step as part of plans to expand the game’s growing popularity globally.

“There has been considerable collaboration behind the scenes, and we are delighted to share these initial developments, which demonstrate our commitment to working together for the betterment of our sport globally.  We will have more to announce in the coming months — this is most definitely just the beginning,” said Monahan.

“With today’s news, I am pleased to say that the PGA Tour and the European Tour are both stronger than at any time in our history, as we are positioned to grow — together — over the next 10 years faster than we have at any point in our existence. We are committed to continuing to evolve and adapt, and with our ever-strengthening partnership with the European Tour, to take the global game to the heights we all know it is capable of.

“This is the beginning of what our future model product will look like.”

He also revealed that prize money across the PGA Tour’s 2021-22 Schedule will increase by 18 per cent. “Prize money itself will increase US$35 million and when you look at the combination of the FedxExCup and Comcast Business Top 10, that will go up from US$70 million to US$85 million,” he said.

The 2021-22 PGA Tour Schedule includes several significant enhancements and features a total of 48 official events — 45 during the FedExCup Regular Season along with three 2022 FedExCup Playoffs events. The 2022 portion of the schedule will kick off the PGA TOUR’s new, nine-year domestic media rights agreements with ViacomCBS, Comcast/NBC and ESPN. As part of the agreement, all three 2022 FedExCup Playoffs events will be broadcast domestically on NBC network television, beginning a rotation that continues with CBS hosting all three events in 2023.

Headline news include the change in location and venue for the kickoff of the FedExCup Playoffs to TPC Southwind in Memphis, Tennessee, starting in 2022, replacing the Regular Season event that has been held in Memphis since 1958. FedEx will serve as the title sponsor of the event, to be known as the FedEx St. Jude Championship (August 8-14), replacing existing title sponsor Northern Trust after this year’s playing of The Northern Trust at Liberty National Golf Club in Jersey City, New Jersey.

The 2022 FedExCup Playoffs will continue to include the BMW Championship, which rotates next year to Wilmington Country Club in Wilmington, Delaware, and the FedExCup Playoffs finale, the TOUR Championship (August 22-28), once again slated for East Lake Golf Club, which recently saw Patrick Cantlay winning the Tour’s ultimate season-long prize.

*  Chuah Choo Chiang is senior director, marketing and communications, Apac for the PGA Tour and is based in Kuala Lumpur.