DEC 24 — And so the holidays are here, and before my greetings are outlawed by the powers that be, let’s take this holiday season as a time to reflect on inter-faith relations in Malaysia.

For those who read the news, it would seem that there is nothing positive in sight. It is harrowing to see the headlines these days; what with hikes on almost everything we own, rent, use, we also have to contend with the breakdown of intercultural engagement.

In my dark moments, I am disheartened and disappointed, and during days that seem hopeful, I think, there’s so much to love about this country. And on some days, I don’t care. Apathy is becoming a friend. I observe and write about things like this, and more often than not, I think that I have nothing to contribute. 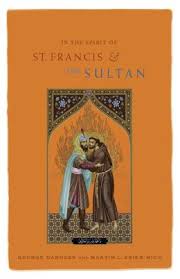 However, a couple of books on compassion and inter-faith engagement, have provided some solace. In The Spirit of St Francis and The Sultan (IBT Books) and Mujahid Rawa’s Berdialog Dengan Gereja are engaging and eye-opening books. There are many more books on similar topics, of course, but these two are homegrown titles which must be supported, for the sole reason that they can serve as guides for such dialogue.

An excerpt from the Sura Al-Mai’dah (5: 82-83), Quran featured in The Spirit of St Francis, “You will surely find the most intense of the people in animosity toward the believers [to be] the Jews and those who associate others with Allah; and you will find the nearest of them in affection to the believers those who say, “We are Christians.”

That is because among them are priests and monks and because they are not arrogant. And when they hear what has been revealed to the Messenger, you see their eyes overflowing with tears because of what they have recognised of the truth. They say, “Our Lord, we have believed, so register us among the witnesses” is a fine example of how Muslims and Christians are almost alike, and similar in their devotions to God.

(This very excerpt made me wonder whether the animosity Malaysian Muslims have towards Christians is because of that: our similarities. That we fear being converted, for we are too alike.)

The book details the discussions the two personalities — St Francis and Sultan Malik al-Kamil — had in 1219. That such an event happened hundreds of years ago is proof that inter-faith engagement was important and there was cause for concern. The book was written specifically for the grassroots, “… for the laity, not for theologians and experts in interfaith dialogue.” (pg 6).

The book admits that it is not easy to find that premise between the two faiths. It requires all parties to get out of their comfort zones. The authors of the book also admit that “dialogue” has “… become such a trendy word that our using it so often might seem a discouraging sign.” It could refer to two extremes of dealing politely with rivals, in all forms and shapes. At best dialogue can only soften the effects, but not cure it.

Short of navel gazing, St Francis forces the reader or concerned citizen to face and deal with their ideas of intercultural relations. It provides a structure such as building confidence whereby both Christians and Muslims (and everyone else who wants to join in the fray) see each other as human beings created by one God “whom both groups worship and seek to serve.”

Parties are to refer to holy scriptures and traditions and highlight the commonality and centrality of social justice. The third part of the book contends with trust, and trusting in progress and facing the ugly truths in each other’s religious histories and lastly, a return to social justice and working towards a common good.

What is interesting about the dialogue the two personalities had is that there was no eyewitness account of their conversations! But they did have these “chats”, and they did not vilify each other’s religions. 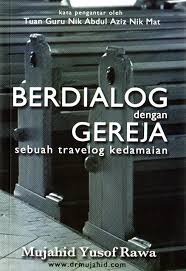 Mujahid’s book Berdialog Dengan Gereja is a personal account of his engagement with churches all around Malaysia, and the people he met along the way. In this journey, he discovers that Christians have similar hopes and fears as Muslims, and all of them want to practise their faith in peace. He encounters prejudice and anger, as well as joy, though there have been a few head scratching moments that perplexed him.

Berdialog Dengan Gereja reads like a journal, a diary of a man and politician seeking to find solutions and is surprised along the way. This honesty and lack of pretence may not render the book as high-brow literature (photos of Mujahid grinning away at meetings and functions are included), but these two qualities are attractive simply because they speak to the common man. Mujahid may not write like Tariq Ramadan; his first book, Menuju PAS Baru read like a thesis, but he is insightful and does not take himself seriously.

Berdialog Dengan Gereja is an important travelogue, because it allows the reader to enter the heartland of a Malaysia that is little read about. Yes, it comes from an Islamist perspective but is that so bad? Mujahid is a progressive Islamist who is concerned about real life issues and situations – we need more of this concern among our politicians.